Kino // PG-13 // June 16, 2020
List Price: $29.95 [Buy now and save at Amazon]
Review by Stuart Galbraith IV | posted July 15, 2020 | E-mail the Author
A follow-up to producer Hal B. Wallis's Anne of a Thousand Days (1969), Mary, Queen of Scots (1971), largely from the same team, is an engrossing historical biography with mostly excellent performances and a superb musical score by John Barry, though it teeters heavily toward Downton Abbey-type melodrama as much as political intrigue and historical fidelity. Mainly concerned with the battle of political wits between Mary Stuart (Vanessa Redgrave) and Elizabeth I (Glenda Jackson), its protagonist is on the losing side, naïve royalty lacking the cold and calculating leadership Elizabeth embodies. Partly for that reason, Elizabeth is a much more interesting character than Mary is.

Early in the story, Mary's allies capture her half-brother, scheming James Stuart (Patrick McGoohan), whom the audience is aware has been plotting with Elizabeth for control of Scotland. Lord Bothwell (Nigel Davenport) urges her to execute or at least imprison him, but she opts to simply banish Stuart. The movie audience immediately recognizes this as a terrible tactical error and, later, when she captures him again and again frees him, it becomes a bit exasperating.

Kino's new Blu-ray offers a fine transfer though it's lacking the overture, intermission break, and exit music found on the earlier DVD release. 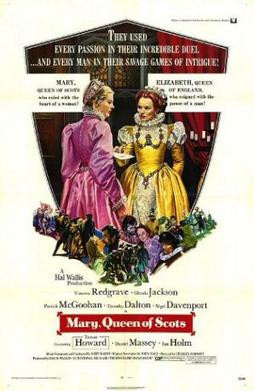 With the premature death of her husband, Francis II, briefly the King of France (and, in reality, only 16 when he died), Catholic Mary Stuart decides to return to her native Scotland, to fill the void left by the death of her father, James V, its government having been overseen by regents. Though still a naïve, unformed teenager, Mary's return threatens the sovereignty of Elizabeth I, as Mary's Catholic supporters consider her the rightful heir to the English crown.

At first, Elizabeth strikes a bargain with James Stewart to allow him to rule Scotland on Mary's behalf, he urging the neophyte ruler to pass the time dancing, riding, and eating good food. This backfires, however, as Mary, with her grandiose plans, refuses to be a mere figurehead. Next, Elizabeth decides to weaken Mary's claim to the throne of England by sending two suitors: ambitious commoner Robert Dudley (Daniel Massey), Elizabeth's lover; and bisexual fop Lord Darnley (Timothy Dalton). Sacrificing sometime-lover Dudley, a Protestant, would ensure control over Mary, while Darnley, a Catholic, dashing but spoiled and hopelessly immature, would create chaos in Mary's court. Ruled by her heart and not her head, she immediately opts to marry Darnley, with disastrous results.

While loyal Lord Bothwell, who genuinely loves Mary, tries to protect her, Protestant Scottish lords (including Andrew Keir, as Ruthven) make a pact to murder Mary and her liaison to the Pope, advisor David Riccio (Ian Holm), and place malleable Darnley on the throne in her place.

Starting with Becket (1964), also produced by Wallis, there was a brief vogue for intelligent historical drama about European (usually British) royalty, frequently revolving around the complex politics in their relationship with the Catholic Church. Less costly than the biggest historical spectacles, The War Lord (1965), A Man for All Seasons (1966), The Lion in Winter (1968), and Anne of a Thousand Days were among those that followed, many commercially and critically quite successful. Mary, Queen of Scots was, apparently, not the hit Wallis's predecessors had been, and it one of the very last of that era's roadshow attractions.

Watching this I could help but think of both Elizabeth R (1971), the superior, six-part BBC drama also starring Glenda Jackson and which aired almost concurrently with the movie's release; and Elizabeth I (2005), a superb miniseries starring Helen Mirren (with Barbara Flynn as Mary) that expertly captures the politics of her reign, as well as Elizabeth's daily life. Elizabeth, frankly, is far more interesting here as well.

Redgrave's Mary is mostly a foolish child. Pampered in France, she thinks she can rule with mercy and love, and blindly regards Elizabeth, at least initially, as a next-door neighbor that'll soon be her BFF. She thinks her tolerance of Protestantism is enough to keep Scottish and English followers of that religion at bay. Elizabeth, contrastingly, sacrifices her personal happiness to hold her kingdom together; except for wise adviser Sir William Cecil (Trevor Howard), the men around her are comparative dolts. And even Cecil she frequently vetoes. Elizabeth is a queen who never, ever shows weakness, while Mary never shows any strength. If not for Bothwell she'd seem doomed from the start.

Vanessa Redgrave plays the character, as written, well enough, but the screenplay covers a lot of ground, many decades, without ever really getting inside her head. She's a lovesick, wide-eyed and impulsive in the early scenes, but barely wizens up by the end, her stubbornness toward Elizabeth rooted in a devout faith to Catholicism in her later years that's never adequately explained.

Glenda Jackson, however, nails every scene she's in beautifully, and McGoohan and especially Davenport are also excellent in their parts. Dalton's rogue is perhaps a bit too effective, so obviously cowardly and mad for power he's like a 16th century Dr. Smith from Lost in Space. From nearly the moment he's introduced the audience becomes impatient for his inevitable comeuppance.

Filmed in Panavision, Kino's Blu-ray of Mary, Queen of Scots looks very good, though it may be an older transfer. The color, sharpness, contrast, etc., are all fine though don't really "pop," either. The DTS-HD Master Audio (mono) is strong for what it is. Optional English subtitles are provided, though in checking these I noticed a fair share of typos and sloppily transcribed dialogue, unusual for a Universal-owned title. Region "A" encoded. (Note: Originally rated "GP," the film was re-rated by the MPAA to "PG-13.")

Several supplements from the DVD version have been ported over, including an isolated music track, featuring commentary by Nick Redman and Jon Burlingame between cues. Also included is a rather grainy trailer and a 1971 promotional featurette. New is an informative audio commentary track by critic Sergio Mims.

Though inferior in some respects to other films about Elizabeth I and Mary, Queen of Scots, it's a handsome production with an excellent cast, and has its moments of inspired drama. Recommended.