I first saw Murder by Decree on cable or maybe VHS a few years after its release, and many years later in the early days of DVD, an Anchor Bay release. I didn't care for it then, first for star Christopher Plummer's unusual take on the Sherlock Holmes character, but also because visually the movie seemed so murkily unattractive.

Kino's new Blu-ray, however, is almost a revelation. The movie is indeed dark and fog-shrouded, with its murders especially seen through a haze of dirty window glass, coal smoke and pollution, etc., all by design. Its cinematography was beyond the capabilities of lower resolution cable and home video, even DVD. On Blu-ray, however, the subtleties of Reginald H. Morris's photography finally work as intended and, pictorially, Murder by Decree is much more impressive. 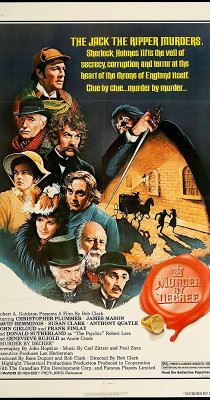 The story has Sherlock Holmes (Plummer) and Dr. John Watson (James Mason) approached by a group of Whitechapel merchants, later revealed to be political radicals, to investigate the gruesome murders of prostitutes by the mysterious serial killer popularly known as "Jack the Ripper." The head of the London Metropolitan Police, Sir Charles Warren (Anthony Quayle), is hostile toward the "amateur" consulting detective, however, especially after Inspectors Lestrade (Frank Finlay) and Foxborough (David Hemmings) find a cryptic clue, a message scrawled on a wall near one of the murders reading "The Juwes are the men that will be blamed for nothing." Warren suppresses that evidence, claiming were it publicly known there would follow rampant anti-Semitic repercussions. Ah, but is that the real reason?

Meanwhile, Holmes and Watson track down acquaintances of the victims, gradually surmising that all have ties to two women: prostitute Mary Kelly (Susan Clark) and the even more elusive Annie Cook (Geneviève Bujold). They also confer with medium Robert Lees (Donald Sutherland), who claims to have seen the Ripper, both in visions and on the streets of London itself.

Plummer sought to humanize Holmes, to make him less aloof, less enigmatic than Basil Rathbone and other predecessors. Plummer's interpretation is more empathetic, even shedding tears at one point. Though he largely achieves these goals, he also makes Holmes far less intriguing as a character. The appeal of Sherlock Holmes was his genius intellect, like a runaway train engine, constantly needing to be challenged lest, in his despair, he falls back on his seven percent escape: cocaine. The price of this great intellect is that he is forever an outsider, an eccentric given to mood swings and lacking certain social graces few understand save for his Boswell, Dr. Watson, devoted friend and admirer. In Murder by Decree, Plummer's Holmes is merely intelligent, with expected moments of Holmes demonstrating his amazing powers of deduction largely absent. In sharp contrast to Jeremy Brett's superb Holmes of ‘80s British television, floridly theatrical and wildly unpredictable, Plummer's is almost subdued.

Fortunately, James Mason's older Watson helps balance the disappointment of Plummer's playing. Eschewing the buffoonery of Nigel Bruce's portrayal of Watson in the Basil Rathbone films of the ‘30s and ‘40s, Mason's Watson is more than competent, and in their scenes together, he and Plummer are like an old married couple. In one of the film's best moments, a bit of business reportedly created by Mason on the set, Watson struggles with a pea on his dinner plate and Holmes, irritated by Watson's constant poking at it with his fork, takes the utensil from him and smashes the pea. Despite Holmes attempt to help his friend, Watson feels defeated. "I didn't want it squashed, I don't like it that way - I like it whole so that you can feel it pop when you bite down on it."

Based as much on speculative books about Jack the Ripper as the Sherlock Holmes stories of Sir Arthur Conan Doyle (pointedly, Doyle receives no screen credit at all, a shocking omission), John Hopkins's screenplay ambitiously weaves the fiction of Holmes's world with the Whitechapel murders, incorporating many real-life historical figures, including Lees, Warren, and, late in the story, Lord Salisbury (John Gielgud), the British Prime Minister. Though the story's conclusions about the identity of Jack the Ripper are questionable, the film for the most part very accurately recreates fine details about the murders. The political overtones are intriguing and far better dramatized than the similar A Study in Terror (1965) but still don't quite reach their full potential.

Where the movie really impresses, especially now on Blu-ray, is its recreation of late 1880s London, a mix of soundstage exteriors for most of the Whitechapel scenes, and real London streets for the rest. Recent digital tweaking of 1890s film footage of street scenes of London and elsewhere (available online at sites like YouTube) vividly capture ordinary life then, and similar scenes in Murder by Decree do likewise. The picture looks more expensive than its $4-5 million budget: these scenes have dozens of costumed extras, period buses, trolleys, and hansom cabs. Director Clark and DP Morris stage this footage with extras and vehicles in the far distance, adding to the believability. Critical eyes looking for distant TV antenna, modern cars, etc., will find none.

Filmed in spherical 1.85:1 Panavision, Kino's Blu-ray of Murder by Decree, as noted above, finally allows for an appealing presentation, its cinematography far more effective on Blu-ray. Reportedly, this is a new remastering from StudioCanal. (Clark's experience with the horror becomes more impressive here, too. A number of scenes are genuinely visually disturbing.) The DTS-HD Master Audio (2.0 mono) is strong for what it is. Optional English subtitles are provided for this Region "A" encoded disc.

Supplements are partly repurposed from earlier releases. They include a trailer and archival commentary track, featuring the late director Bob Clark. New to home video is a second commentary track, this one featuring Howard S. Berger and Steve Mitchell.

I liked Murder by Decree a lot more on this third viewing after decades of home video versions that, visually, didn't do the picture justice. It's still an imperfect Sherlock Holmes movie, but handsomely made, intelligent, and features an excellent cast. Highly Recommended.