Western Classics I (When the Daltons Rode / The Virginian / Whispering Smith)

The 1940s was, perhaps, the most prolific decade of Western movie production, yet artistically the genre was fairly stagnant. B-Westerns had become increasingly juvenile, while A-Westerns remained stubbornly generic, colorful but unambitious for the most part. There were exceptions, of course: William A. Wellman's The Ox-Bow Incident (1942), Howard Hawks's Red River (1948), John Ford's Fort Apache (1948), 3 Godfathers, and She Wore a Yellow Ribbon (both 1949). However, the overwhelming number of A-level Hollywood Westerns from the decade were more like the three presented here. Great production values, fine casts, but pretty ordinary. 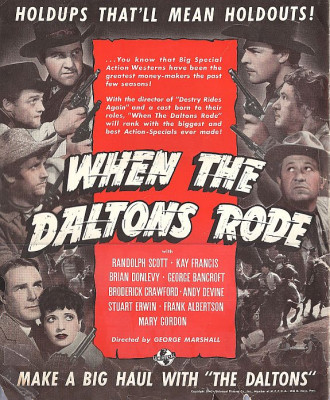 Clearly influenced by the successes of both Jesse James (1939), the Tyrone Power/Henry Fonda classic that spurred a subgenre of "sympathetic outlaw" films; and Destry Rides Again (1939), director George Marshall's semi-comical Western with James Stewart and Marlene Dietrich, When the Daltons Rode has Marshall and screenwriter Harold Shumate awkwardly fusing these incompatible styles. Production Code restrictions would also seem to account for the picture's weird structure, with top-billed Randolph Scott and Kay Francis playing characters peripheral to the Dalton saga. They exist seemingly to provide the film with a semi-happy happy before the final fade-out.

The thin plot has attorney Tod Jackson (Scott), while passing through Kansas, stopping by to visit the Dalton family, old friends from his childhood days. The Daltons: Grat (Brian Donlevy), Bob (Broderick Crawford), Ben (Stuart Erwin), and Emmett (Frank Albertson) are honest, hard-working farmers doting on their Ma (Mary Gordon), with Bob even the local marshal.

When a crooked land development company tries to steal their farmland, Ben accidentally kills a surveyor, and during the sham trial the Daltons, left with no other choice, flee and turn to a life of crime, with Ozark Jones (Andy Devine), a hot-blooded Lothario (!) joining them rather than submit to a shotgun wedding. Meanwhile Tod, sitting on the sidelines after legal solutions collapse, falls in love with Julie King (Francis, anachronistically decked out in contemporary make-up, hair, and even ‘40s-style shoulder pads), Bob's fiancée. Tod's loyalty to Bob, naturally, stands in the way of True Love.

(Spoilers) Production Code restrictions strangle a potentially good story. The movie was based on the same-named book, co-written by Emmett Dalton, who died in 1937. Yet, in the movie, he's gunned down along with the other Daltons because at the time all criminal acts had to be punished; merely having him arrested apparently not enough. Randolph Scott dominates the first-half of the film, but is largely absent later when the narrative shifts to the Daltons and their activities.

Compounding the oddness of When the Daltons Rode is its awkward insertions of comedy relief, (more spoilers) most notably giving Andy Devine's broadly comic outlaw plenty of screentime to clown (e.g., Ozark trying to eat a lemon pie while running from the law) only to have loveable Andy ignominiously gunned down with the rest. Director Marshall, who'd earlier directed Laurel & Hardy at the Roach Studios, fills the pictures with bit players known for their work in that sort of comedy: Stanley Blystone, Walter Long, James C. Morton, etc.

Where When the Daltons Rode delivers is in its many, big-scale shoot-outs and impressive stunt work, including something I don't recall seeing in any other Western: the gang, on horseback, jumping from a moving train. (The horses come awfully close to breaking their legs and one can't imagine this type of "gag" being attempted today.) Curiously, some reviews refer to this as a "B-Western" but it's anything but. By any measure this is an A-level production, certainly by Universal's standards; only its unimaginative, highly fictional screenplay has a B-movie flavor. Indeed, there's so much big-scale action, the Dalton's movements are frequently dramatized in the form of elaborate action montages. This material is so good it offsets some of the picture's weaknesses. Indeed, Frank Skinner's musical scoring takes on an almost operatic quality toward the end. 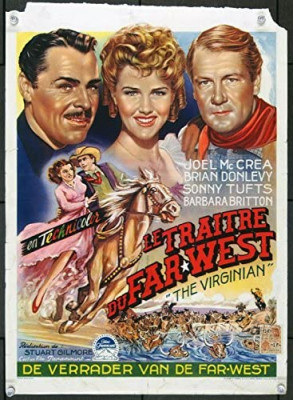 The Virginian was the fourth film of Owen Wister's 1902 novel, debatably the first serious work of western fiction. Cecil B. DeMille adapted it first, as a 1914 silent film, and 1946 audiences doubtlessly remembered the 1929 early talkie, which starred Gary Cooper.

This remake opens in 1885 Vermont, where pretty Molly Wood (Barbara Britton) leaves home to become a schoolteacher in rural Wyoming Territory. Beautiful young women being a rarity in them thar parts, her adopted town immediately becomes enamored of her, especially cowboys Steve Andrews (Sonny Tufts) and "the Virginian" (Joel McCrea). Gregarious rogue Steve seems to have the upper hand over the Virginian, a crack cowboy but all thumbs around women, but we know where this is leading.

Most of the town suspects gambler Trampas (Brian Donlevy) of rustling cattle, thinning nearby ranches and rebranding them for a quick sell-off, but the local judge is reluctant to charge him for lack of evidence, while the local sheriff is on Trampas's payroll. Steve falls in with Trampas, while the Virginian is tasked with leading a posse to catch the rustlers, whomever they turn out to be.

Though passable as entertainment, there's not much here beyond the pleasure of watching the four leads go through their passes, and one very sequence I'll come to shortly. In his Westerns, Joel McCrea typically played a seasoned, eminently decent cowhand or gunfighter, here with the added wrinkle of being totally inexperienced and awkward around a woman he's attracted to, she taking offense to his clumsy attempts to win her over. Her annoyance is overdone in the early scenes; the audience just knows they're made for each other, but McCrea's slightly atypical character is mildly interesting.

After his death, Sonny Tufts became something of a joke, the poster child of the Hollywood "star" of dubious ability and fame. Partly this was self-inflicted, with Tufts, an abusive alcoholic in his later years, making bad career choices culminating with the movie he's now chiefly remembered for, playing the lead (though not the hero) in Cat-Women of the Moon (1953), a notorious stinker. Yet, in The Virginian, he's actually quite good, appealing in a breezy, Jack Carson sort of way, the friend of the hero who, like Tufts himself, makes some disastrous life choices.

(Spoilers) When one of three captured rustlers turn out to be Steve, the Virginian can only stand by as his posse make plans to "string ‘em up," a quasi-lynching. Having recently re-watched The Ox-Bow Incident, its story likewise built around a lynching, the two scenes make for interesting comparison. The long lead up to the lynching in Ox-Bow is almost unbearably tense, even seen today, but the hanging of three similar characters in The Virginian is unexpectedly powerful also.

There are, however, stark differences. In Ox-Bow the vigilantes are a motley lot, grizzled and unshaven, their faces deeply-lined and almost grotesque (one of the extras is the acromegalic actor Rondo Hatton). The Virginian being in Technicolor, presents its cowboys as clean-shaven, upstanding citizen-types, all wearing colorful duds with not a spattering of mud on any of ‘em, even though they've been riding hard for days. In Ox-Bow, one of the three men tries to escape, another goes mad, and the third desperately tries to reason with the lynching party. In The Virginian the similar trio is unbelievably calm, even resigned to their fates. Obviously, this can't hold a candle to Wellman's film yet, within its own universe, the sequence is still effective, mainly due to McCrea's performance, and the unexpectedly good one by Tufts. 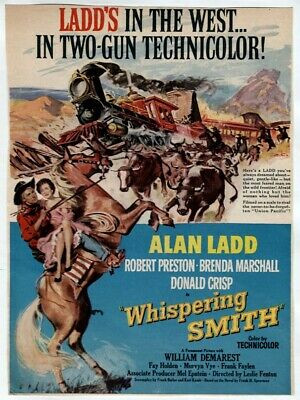 Most of the town is aware that rancher Barney Rebstock (Donald Crisp) is rustling cattle and occasionally ordering his hired gun, albino Whitey DuSang (Frank Faylen) to kill sheepherders and the like, but the local sheriff (Will Wright) is old and ineffectual. Smith notes that, despite his modest pay from the railroad as the leader of its wrecking crew, Sinclair has a sprawling ranch, suggesting he may be conspiring with Rebstock, stealing cattle from wrecked trains.

As with The Virginian, Whispering Smith is pretty ordinary as a Western, though watchable thanks to the lavish production values, attractive Technicolor lensing, and the cast. Ladd's low-key performance makes a nice contrast to Preston's larger-than-life one, who's big-hearted and very likeable some of the time, but controlling and borderline abusive toward Marian elsewhere. He's used to pilfering undamaged goods from wrecks for himself, petty crimes that gradually escalate, and his umbrage at suggestions that what he's doing is morally objectionable and self-destructive are realistically played.

The picture's main asset, however, is raven-haired Brenda Marshall, indescribably beautiful in Technicolor. Married to William Holden at the time, Marshall's career included major roles in films like The Sea Hawk, Captains of the Clouds, and The Constant Nymph but, despite her popularity her film work tapered off sharply after 1943, just four years in the business, and after Whispering Smith she made just one more feature, The Iroquois Trail (1950) before retiring.

The other performance of note, indeed a startling one, is Frank Faylen's albino gunfighter. Though today best remember as Ernie the friendly cab driver in It's a Wonderful Life and later as Dwayne Hickman's grocer father on TV's The Many Loves of Dobie Gillis, Faylen had a long and peculiarly spotty career, appearing in both small credited roles and uncredited bit parts well into the mid-1940s, playing every type of character imaginable. He did occasionally play henchman, but his role here, visually similar to blues singer Johnny Winter, is like a spaghetti Western villain in an ordinary ‘40s Technicolor one.

One Universal and two Paramounts, the latter two filmed in three-strip Technicolor, with all three licensed to Kino from Universal, Western Classics I offers a trio of handsomely transferred movies, the color titles possibly culled from original black-and-white separation elements judging by their richness and absence of fringing. The DTS-HD Master Audio (mono) soundtrack is also better than adequate, and optional English subtitles are provided for these (3) Region "A" discs.

The decent list of supplements includes trailers and audio commentaries by Toby Roan (on When the Daltons Rode), Lee Gambin and Rutanya Alda (on The Virginian), and Simon Abrams (on Whispering Smith). Alda's presence baffled me at first; the actress (The Deer Hunter, Rocky II, Amityville II) had no known connection to anyone in The Virginian but, apparently, is shifting careers to film historian, and her track, while unusual and not entirely successful, adds personal remembrances and connections to actors and others of a type not usually found on such tracks.

None of the three films in this set is much better than "okay," but the transfers look great and the supplements are another incentive. Geared, really, for hardcore Western fans than general audiences, Western Classics I is, for them, Recommended.