Kino // Unrated // June 30, 2020
List Price: $29.95 [Buy now and save at Amazon]
Review by Stuart Galbraith IV | posted July 23, 2020 | E-mail the Author
A real oddity, Paracelsus (1943) is a biographical drama about the life of the 16th century physician and alchemist (1493-1541), the "father of toxicology" and an advocate of what today would be called socialized medicine and universal health care. What makes the movie so fascinating is that it was made under the regime of Nazi Germany, while star Werner Krauss, very good as the advocate physician, was a Nazi himself, and a virulent anti-Semite to boot.

G.W. Pabst directed, though later he apparently disowned the film, perhaps more because of its Nazi film industry origins than the quality of the movie itself. It's preachy throughout, almost polemic, and has an unneeded romantic subplot, but it's a lavish production along the lines of William Dieterle's The Hunchback of Notre Dame (1939), with expansive period sets and elaborate costumes. Restored in 2K about five years ago, the image is pristinely sharp throughout, with only a couple of brief grainy dissolves. 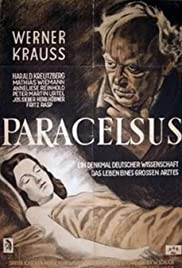 The story begins around 1526 in Basel, Switzerland, when the maid of printer Froben (Rudolf Blümner) begs Paracelsus (Krauss) and his servant Bilse (Josef Sieber) to hurry to her ailing master, whose unhealed leg the physician Magister (Fritz Rasp) eagerly wants to amputate. The Magister scoffs at Paracelsus's unconventional treatment, but soon Froben is up and walking normally again.

Paracelsus's skills are put to the test by the plague. He orders a complete lockdown of the city but Basel's rich merchants are reluctant to comply. (Oh how these films become relevant again!) Pferfferkorn unsuccessfully tries smuggling goods into the city, but a jester Fliegenbein (dancer/choreographer Harald Kreutzberg) sneaks in with the goods, unaware that he's a super-carrier of the Black Death. Fortunately, Paracelsus recognizes his condition almost immediately, prevents an outbreak within the city, and even cures the grateful jester. Paracelsus's real troubles begin with he begins searching for the elixir of immortality.

Paracelsus reminds this reviewer of parts of Preston Sturges's unusual The Great Moment (1944), about the revolutionary but discredited dentist who discovered the use of ether for general anesthesia; and Akira Kurosawa's Red Beard (1965), about another warrior doctor whose demeanor and methods baffle others and who treats all of his patients, rich and poor, equally. Other than a vague sense of national pride in Paracelsus's refusal to teach in Latin and his insistence on writing his manuscripts in German, there's little obvious Nazi propaganda here. Indeed, as depicted in the film, Paracelsus is an advocate for socialized medicine and providing free medical services to the poor at a time when only the wealthy could afford treatment from the best physicians. An interesting subplot concerning famed German knight and poet Ulrich von Hutten (Mathias Wieman), stricken with a fatal illness and who visits Paracelsus looking for a cure, a scene that avoids mentioning the disease that killed him: syphilis.

In a fine performance, actor Werner Krauss resembles some portraits of Paracelsus if not his philosophy. An acclaimed film and stage actor from the 1910s, Krauss starred as the titular character in the seminal The Cabinet of Dr. Caligari (1920), Othello in Iago in two different movies, and major roles in Waxworks (1924) and Tartuffe (1926), among others. Krauss, however, became a dedicated Nazi and unapologetic anti-Semite, playing multiple grotesque Jewish stereotypes in the notorious anti-Semitic propaganda film Jud Süß (1940). Gradually reintegrated back into society following mandatory denazification, Krauss died in relative obscurity in 1959.

The film is quite lavish, with elaborate period soundstage and exterior sets, costumes and wigs. Even the footwear looks detailed and historically authentic. To the extent possible the film seems to document its time and place in exhaustive detail, and of Paracelsus's life and its particulars. Director Pabst, less favored by the Nazis, made just two films during the war, this and, before it, The Comedians (1941), another historical film. Already by then, however, Pabst was considered past his prime, his great silent and early-talkie films, including The Joyless Street (1925), Pandora's Box and Diary of a Lost Girl (both 1929) already behind him. Paracelsus is directed with a sure hand, but with little in the way of visual flourishes.

Paracelsus must have survived the final days of the war unscathed, as the 2K restoration of this black-and-white, 1.37:1 standard frame film looks nearly perfect throughout, with excellent detail and contrast. Only a smattering of shots, mostly dissolves and other lab composites, appear less than pristine. The DTS-HD Master Audio (mono) is also fine and the English subtitles for the German dialogue is very good also. Region "A" encoded.

Supplements are limited to an informative audio commentary track by Samm Deighan.

While not exactly great cinema, Paracelsus makes for fascinating viewing, and the picture's production values, performances, and the story of Paracelsus himself, a historical figure much less known outside Germany and medical circles, maintain the viewer's interest throughout. Highly Recommended.