Kino // Unrated // June 9, 2020
List Price: $29.95 [Buy now and save at Amazon]
Review by Stuart Galbraith IV | posted August 3, 2020 | E-mail the Author
Victor and Victoria (Viktor und Viktoria, 1933), the German comedy that inspired Blake Edwards's much-loved 1982 remake, Victor/Victoria, is good but not great, and not nearly as racy (or gender-confused) as I expected. It has many good points and, overall, is pretty entertaining, though it wears out its welcome before it's over. It is interesting, however, and comparisons to Edwards's movie offer an almost textbook case for how to successfully remake an earlier success. Edwards retains almost everything about the original that works, while improving upon it in myriad ways, though even he doesn't quite live up to the story's full potential.

Kino's new Blu-ray offers an excellent transfer of mostly pristine elements. A few dissolves are grainy, and there's a big scratch on the negative that lasts about 30 seconds about two-thirds into the film, but considering its age it looks great. 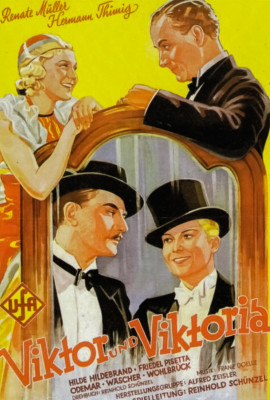 Susanne (Renate Müller) is a down-on-her-luck actress/singer who befriends excitable jack-of-all-trades performer Viktor Hempel (Hermann Thimig). When he loses his voice to a cold, he proposes Susanne take his place in a female impersonation act he does on the side. Reluctantly she agrees, overcoming her extreme discomfort changing in the men's dressing room. Her act is an immediate success, and as "Viktor," with Hempel functioning as her manager, she becomes the toast of Europe.

While in London (and ensconced at the Savoy), Susanne-as-Viktor meets and falls in love with suave fellow German Robert (Anton Walbrook, billed here under his birth name, Adolf Wohlbrück). Early on, he figures out that Viktor is not the "pretty boy" everyone assumes she is, but rather a woman pretending to be a man pretending to be a woman. He teases her by making her drink shots of whisky, smoke a pipe, and get a shave, among other things. Hempel, meanwhile, has fallen hard for Lilian (Friedel Pisetta), a kind of chorus girl whose job it is to walk across the stage between acts announcing the act's program number.

The movie is a quasi-operetta, with the musical numbers not limited to what's performed on stage, characters singing their dialogue here and there. Also unexpected is the amount of broad physical comedy, all of which is energetically realized by director Reinhold Schünzel and cinematographer Konstantin Irmen-Tschet, whose credits include such landmark German films as Metropolis, Woman in the Moon, and Münchhausen. There's a lot of camera dollying throughout, always to good effect.

Coming at the tail end of the Weimar Republic, one might have expected Victor and Victoria to be more daring than it is, something like a racy pre-Code Hollywood film at least. Instead, it's rather tame, with fairly ordinary comic scenes like "Viktor" struggling trying to smoke a pipe rather than all the gender confusion possibilities the story invites. As Viktor, Müller is even less convincing as a man than Julie Andrews was in the remake; during the barbershop scene, for instance, Viktor's obvious bosom makes plain her real sex. In Walbrook's part, James Garner's character believes "Victor" is a female impersonator until late in the story (though not quite late enough), his heterosexuality called into question as he falls in love with someone he thinks is a man. The weaker script of the original, with Robert knowingly toying with Susanne, isn't as funny or interesting.

Likewise, Edwards wisely changed Hermann Thimig's character from a hard-drinking skirt-chaser to a flamboyantly gay one (played by Robert Preston). In the original, Thimig's character starts out funny but gradually his lovesick personality and drunkenness becomes grating instead of amusing.

In her recent memoir, Julie Andrews speaks fondly of the German film. It's clear she and Edwards studied it very closely, Edwards retaining everything good about it while making intelligent changes throughout. Some moments replicate almost exactly from the original work. Both pictures have a big, slapstick brawl, the earlier film in a supposedly London pub only a German could have imagined, but some of the gags are directly repeated in Edwards's film.

Of the cast, Walbrook is immediately recognizable for his later work in British films, especially for Powell & Pressburger (The Life and Death of Colonel Blimp, The Red Shoes, etc.).

Renate Müller had a busy character from the late silent period, even headlining two British musical-comedies and one in France, it co-directed by Schünzel. During the rise of Nazi Germany, she became regarded as an ideal "Aryan" woman, a claim to fame she reportedly despised. In 1937, at age 31, she died under mysterious circumstances, possibly thrown out of a hospital window to her death by Gestapo officers, conceivably over a Jewish lover. Director Schünzel himself was Jewish, but considered valuable enough that the Nazis allowed him to continue making films until he fled to Hollywood in 1937. He directed four films in the U.S., none especially noteworthy, but resuming his acting career he appeared in many famous pictures, often in good supporting parts, including Hangmen Also Die, Dragonwyck, Notorious, and others.

Restored and remastered in its native Germany, Victor and Victoria, in black-and-white, 1.37:1 standard format, looks very good for its, seemingly mastered from excellent composite elements, with only that aforementioned tear in the negative in one short scene a mild distraction. The DTS-HD Master Audio (mono) is also fine and the English subtitles for the German dialogue is very good also. Region "A" encoded.

Supplements are limited to an informative audio commentary track by film historian Gaylyn Studlar. Though the track's audio isn't great, her scripted remarks are obviously carefully researched and thorough on this satisfying track.

Intriguing as much as it is entertaining, Victor and Victoria was done better in Blake Edwards's Victor/Victoria (despite its own faults) but the picture is definitely worth seeing and Highly Recommended.