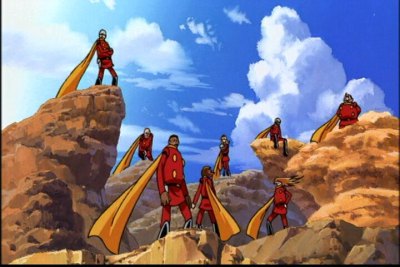 Cartoon network has imported another show from Japan to broadcast here in the US.  This is a great trend, because it gives anime more exposure, and it is a quality show.

Cyborg 009 (pronounced zero zero nine, not double oh nine) is a show about a group of  people who are half-human and half-robot.  Abducted and experimented on against their will, these cyborgs are revolting against the person who made them, the evil Black Ghost.
This DVD contains the following edited episodes:

The Birth:  Young Joe Shimamura wakes up on a lab table, not sure where he is.  A voice in his head tells him that he's in trouble and needs to escape.   As he flees from the room, large robots attack him.  Joe, finding that he's able to punch through their steel bodies and rip their limbs off, defeats them with ease.   Following the voices instructions, he breaks out of the building and runs into the desert.  There he meets eight other super powered people and finds out that they, like himself, are cyborgs.  They are victims of the evil weapons dealer, Black Ghost, who has abducted and experimented on them.  Each one has a super power and is called by addressed by their lab number.  Joe is Cyborg 009, the most advanced.  He has a switch in his rear molar that gives him super speed when he depresses it.  A great episode, full of action and mystery.  It introduces the team but doesn't tell you too much about their personalities.

The Escape:  Though Cyborg 009 has fled and joined up with the other escaped cyborgs, that doesn't mean that Black Ghost is going to let him get away.  The nine robots have to fight a squadron of planes and hide in a cave on a remote island.  But Black Ghost finds them and attacks again.  Another good, fast paced episode.  The concept is fleshed out a little and it bodes well for the rest of the series.

Assassin of Flash:  The cyborgs are hiding out at Dr. Koizumi's.  They feel safe until Cyborg 0010 shows up.  The latest model, he has all their abilities, and more.  He can fire laser guided electrical charges, and easily defeats the cyborgs.  Even 009 cannot best him, and is badly damaged.  A fun show.  After the last tow episodes, you get the feeling that the cyborgs can do just about anything.  0010 really puts them in their place and you see that they can be beaten.

At the End of the Line:  Having escaped from 0010 only because it started raining, the team feels defeated.  They realize that they have a chance against their enemy if they work as a team.  But when 0010 reveals his a secret weapon, can even all of the cyborgs together triumph?  The conclusion to last episode's story worked well.  The "let's work as a team" aspect wasn't overdone, and didn't work out as well as the cyborgs thought it would. 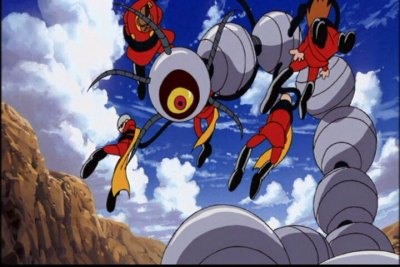 This show has the look of an old fashion anime program.  Based on a manga strip that started in 1969, the character designs are from that era, with exaggerated facial features, sleek lines and big feet.  But that's not all this show owe to classic anime, it also has the feel of an old show.  This program harkens back to a simpler day, when everything was black and white. Black Ghost is evil.  He's not misguided and doing what he thinks is right or trying to punish the world, or anything like that.  He's just evil, he even admits it.   The good guys don't kill people, even if they are bad.  They always manage to let the pawns of Black Ghost jump out of their tanks before it's destroyed.  That gives the show an old-time feel, and that's not bad.  I really could get into the style and fashion of the show.

I enjoyed the program a lot, these first episodes were some of the best that I've seen.  Though I had some slight qualms.  I was also hoping the heroes would take a little more pro-active role in things.  As it is, they seem to sit around and wait for things to happen to them in the last two shows.  It is still early in the show, so these critiques will hopefully be proven groundless in future volumes.

What is the difference between the edited and unedited versions?

I have seen the first four episodes in both the edited and unedited versions.  I was astounded at how minor the differences were.  Much more minor than in the changes made in Yu Yu Hakusho for instance.  There wasn't any language or sex that needed to be edited out.  The cyborgs still shoot guns at the bad guy in both versions, but since there is no blood shown, there is no worry on that front.  The only changes I could see were a few shots being removed from the edited version.  All the instances were static shots of dead bodies.  (Not very gruesome shots at that.)  The changes were so minor, that I was surprised that they were requested to make them in the first place.  Of course, future episodes may have more violence or blood in them, but the eight included on the first unedited  DVD set did not have anything objectionable.  After seeing the unedited version, I have no problem letting my seven and eleven year old sons watch it.

Aside from a few extra frames here or there, the uncut version offers some other nice features.  It has an original language track in 5.1, and an English DTS track that the cut DVD does not (in addition to an English 5.1 track that both discs contain.)   The original version is also presented in 1.78:1 widescreen, whereas the TV version of the show is a pan and scan 1.33:1 version.

The unedited DVD is a two disc set with eight episodes for a retail price of $39.95, or  $4.99 per show.  The edited version contains four episodes per DVD for a retail price of $24.96 or $6.24 per show.  With the edited version being $1.25 per show more expensive for a P&S picture without the DTS and  Japanese language track I can't see why anyone would get it.  The alterations are just too minor.   Even small children would be able to watch the uncut version, in my opinion.  (Which is not something I would say for Yu Yu Hakusho.)

This show only has an English 5.1 dub track.  Even though this is an edited disc, I see no reason not to include the original language track and the English DTS track that is available on the uncut version.  As it was, I really liked the sound of this disc.  There was a lot of directionality, and a lot of effects and music were thrown to the rear speakers.  The music was clear and full, and the voices easy to distinguish and not muddled at all.  An impressive sound track.

The video was also of high caliber, even though it was formatted to a 1.33:1 aspect ration.  There was very good definition with the lines being tight and little digital artifacts.  The colors were appropriate and bright.  This disc looked better than the episode I caught on Cartoon Network recently.

There were only some trailers on this as extras.  Nothing exciting, unfortunately.

These first four episodes were a lot of fun.  You just start to get a feel for the characters and where the series may go from these episodes, but it's a good start.  The amazingly minor cuts that were made to this DVD, and the fact that it cost more per episode than the uncut version, makes the uncut DVD the one to get.  (Read my review of the uncut DVD here.)  But if you are set on getting the edited version and was wondering if this show is worth purchasing, I would have to recommend it.