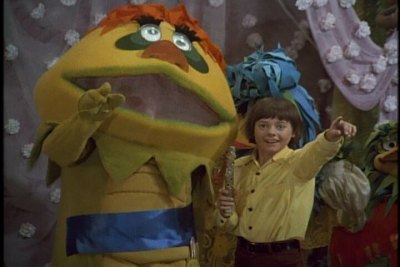 Just about everyone who grew up in America during the 70's recognizes the names of Sid and Marty Krofft.  These brothers were responsible for some of the most fondly remembered (and truly bizarre) children's programming of the time.  Every Saturday morning for nearly a decade, millions of children tuned into a Krofft produced show.  Now Rhino has release the entire run of Krofft's first show from 1969:  H. R. Pufnstuf.

Coming from a family of puppeteers, The Kroffts naturally went into the family business.  Older brother Sid was performing with the Ringling Bros. circus at the age of 10.  In the 50's he went on to tour with a number of big name acts including Frank Sinatra, Judy Garland, and Tony Martin.  In 1957 the artistic Sid brought in his business minded brother Marty.  The two would be the perfect match of artistic vision and down to earth sensibility.

The brothers toured with their own puppet show, had an off Broadway show (a risqué burlesque production called Les Poupees de Paris,) and appeared at the 1962's World's Fair. (Along with the 1965 and 1967 Fairs too.)  They also created a show for the Six Flags amusement park.  All the while their puppets were getting more intricate and the shows more grand.  Along the way, they started putting people inside of intricate costumes.

The costumes are what led to their entry into children's television.  In 1967 the animation team of Hanna and Barbera approached the Kroffts to make a set of costumes for a new show they were going to launch.  This show would have a series of cartoons presented by a anthropomorphic cartoon rock band.  As the idea progressed, the Hanna-Barbera team decided that a live action framing segment would have more appeal, so they commissioned the Kroffts to make the costumes for the band.  The costumes looked great and the show, The Banana Splits Adventure Hour, was a huge hit.

The Kroffts realize a large part of the success of The Banana Splits was due to the costumes they created.  They reasoned that they could come up with something even more imaginative and sell it to a network.  The timing was perfect.  Various groups were pressuring the networks to have less violent programming, and the Splits has proven that live action shows would be accepted on Saturday mornings.

NBC was interested, and the Kroffts spent a year working up the concept. H. R. Pufnstuf, made its television debut on September 6th, 1969.

As retold in the beginning song of every episode, H. R. Pufnstuf was the story of a young boy, Jimmy (Jack Wild,) and his golden talking flute, Freddy.  One day Jimmy finds a beautiful boat that invites him to go for a ride.  When they get out to sea, it turns out that the boat is a trap.  An evil witch, Witchie-poo (Billie Hayes,) has planted the snare in order to steal the flute.  The boat grabs Jimmy, but he fights free and jumps overboard.  He swims to Living Island were he is rescued by H.R. Pufnstuf and his side kicks Cling and Clang.  The witch is furious, but she flies back to her castle to try again another day.

That sets up the plot for every episode.  Jimmy tries to get back home with the help of Pufnstuf and the other residents of Living Island, while Witchiepoo tries to steal the flute with the bumbling help of her incompetent assistants..

But back to the show.  This was a fun outing.  Living Island turns out be a place where just about everything is alive and can talk.  Trees, mushrooms, clocks, buildings, everything.  It was very colorful, and creative place, with hippy trees, walking alarm clocks,  sneezing houses and living clouds.  The shows had a lot of action, some comedy, and just the right amount of suspense.  Most of the songs in the show were just so-so, but when they were good, they were great.  I fondly remember "Oranges, Smoranges" where Witchie-poo sings all the words rhyming with orange. 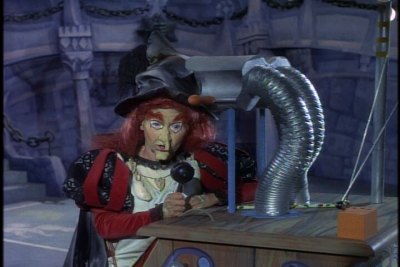 In my opinion, Billie Hayes as Witchie-poo was the star of the show.  She tool the role and ran with it, making the witch both menacing and goofy.   Her character being anything but understated, she wasn't afraid to make a fool of herself.   Her acting was so over-the-top, that you couldn't help but like her.

Jack Wild was an adequate Jimmy.  He was able to sing and dance, and the his accent worked well with the show.  The main problem was that he couldn't compete with the scenery.  With talking mushrooms and polka dotted horses filling the frame, you eye just wasn't drawn to Jack.  Even Billie Hayes had a lot of heavy makeup and prosthetics to make her appear almost inhuman.  Jack tried, but his best scenes were the ones where he was undisguised and could compete with the other actors on an equal basis.

I was surprised when I found out several years ago that there were only seventeen episodes of H. R. Pufnstuf.  I could recall watching the show for years it seemed.  Well, I was right.  H. R. Pufnstuf was a fixture on Saturday mornings for at least three years.  (Two on NBC, and another year on ABC with a year off in between.)  They just showed them over and over.  That's a total of 156 weeks that they spread 17 episodes over.  Pretty thin.

But if it was popular enough to run for three years, why didn't they make more?  Well, it's because the networks were cheap.  They figured that there was no need to make more when they could reshow those 17 indefinitely.  This was a problem that would plague the Kroffts for most of their Saturday morning kids show career.

So how does the show hold up today?  Pretty well I'd say.  Watching them back to back can get tiring, but they still have a certain charm to them.  The plots are very repetitive, but the story is not the show's attraction.  It is the wildly creative and unusual setting and life size puppets that make the show so enjoyable.

My sons, aged 7 and 11, really enjoyed the episodes that they watched.  I was surprised that in this day of computerized special effects and hyper-active animation the more sedate pace of Pufnstuf would interest them, but it did.  They enjoyed it and asked for more.

The two channel mono mix on this DVD was typical for a late 60's TV show.  It did not sound full and rich, but the dialog was clear and easy to understand.  There weren't any noticeable hiss or other major defects.

The video was a mixed bag. The full frame prints that were used very good.  The colors were bright with little if any fading. There were only occasional spots of dirt, and very few other instances of print damage.  The encoding wasn't as good as I was hoping for.  There were a  lot of digital artifacts in the picture.  There was instances of color bleeding, especially around deep red object like Ludicrous Lion's coat, and aliasing was a common problem.  There was a good amount of digital noise in the picture too, causing large expanses of color to seem to shimmer or move.  In addition to there defects, there was a strange interference when two bright colors touched each other.  It would cause a stair step silver line to appear between the two colors.  This happened a lot on the magic boat in the introductory song, and sometimes appeared along the edges of Pufnstuf's sash.  A little more care in the creation of this DVD would have resulted in a superior set.  As it was, these video defects were not so bad as to be distracting, but they were noticeable.

There are some great extras included with this set, all included on the third disc.

Interview with Sid and Marty Krofft:  A 22 minute talk with Pufnstuf's creators.  They talk about their start in show business and what they did up before TV.  They talk about Pufnstuf, of course, including the rumors that the show was filled with drug references.  (Though they don't come right out and deny it, they do strongly imply that there is no basis to the rumors.)  A great extra, that I was excited to watch.

Interview with Billie Hayes:  A 10 minute talk with the actress who played Witchie-poo.  Since her character is my favorite one on the show, I was happy to see this interview.  I was done at some sort of convention, there are people milling around tables in the background which is a little distracting, but it is a  good chat none the less.  She talks about how show got into acting and how she came to the attention of the Kroffts.  She reminisces about the show.

Interview with Jack Wild:  This 11 ½ minute interview is the same one that appears on Rhino's earlier Pufnstuf DVD.  He talks about how he got started in show business and his memories of working with the Kroffts.

Interview with Hal Erickson:  Erickson is a television historian and the author of Sid and Marty Krofft:  A Critical Study of Saturday Morning Children's Television, 1969-1993.  (Which is an excellent book and highly recommended to anyone interested in the Krofft's programs or Saturday morning children's shows.  Don't let the title fool you, the book is not dry and filled with interesting anecdotes.  A very valuable resource.    You can purchase a copy at Amazon.) Erickson talks about what Saturday morning television was like at the time Pufnstuf was aired, and the forces acting on programming content at the time.  This 10 minute interview is very informative.

Here's Irving:  An 8 minute pilot for a children's TV show that the Kroffts created in the 50's.  This puppet show involved an old circus lion who reminisces about the performers he know and things he had seen.   Created with traditional puppets, this show is a glimpse of what the Krofft stage shows must have looked like.  A wonderful extra to include.

This set is a great stroll down memory lane.  Getting the whole series in one set is a real treat.  I enjoyed seeing these again, and my young sons liked it too.  There were a lot of digital artifacts that were noticeable, but they didn't interfere with my enjoyment of the DVDs.  Recommended.  Now they need to release the Pufnstuf movie, and the rest of the Krofft shows.  (Yes, I'd even like to see the oddly disturbing Liddsville on DVD.)