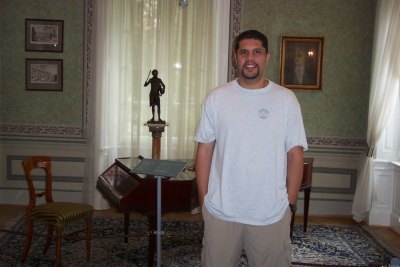 [Email]
TRUE-TO-LIFE FACT: If you rearrange the letters in his full name, "Matthew Jotham Millheiser" becomes "The Immortal Jewish Hamlet." Hard to believe! Anyway, here's a true story/gratuitous name dropping regarding Señor Millheiser: he went to Pedro Almodóvar's 1988 New Year's Eve party in the Abacos when he was 17 (Millheiser, not Almodóvar)... and had no idea who Almodóvar was... Four years later, after he saw TIE ME UP! TIE ME DOWN!, Millheiser almost kicked himself into oblivion. Lost opportunities are like dropping your pants in front of Ed McMahon on Arbor Day. Regrettable, surreal, and remotely distant. If you are really interested in boring biographical stats, he's 6' 2, a madcap Aquarian with little affinity for soybeans, works as a Project Manager/Developer for an IT Staffing/Solutions company, has a BA in English and American Literature from Brandeis University, lives in Miami but works in Fort Lauderdale (gotta love that commute), and admires the Harry Potter devotion of one Eucretia Chastity Bush of Lutz, Florida. Matthew has also written such eclectic fare as the suspense novel The Odessa Gambit, co-wrote the book, music, and lyrics to the acclaimed off-Broadway musical Stitches & Thimbles, delivered the audiobook narration for Dr. Sarah Lieberman's Listen With Pain, Listen With Purpose, wrote the Forward to Terry Hamilton's mindblowing 1996 cult sensation Demagogues, Iconoclasts, and the Emergence of the Anti-Self, and created the award-winning anime Green Angel Regatta #7 -- none of which actually exist, but he thought they made for some pretty nifty sounding titles. Millheiser has also convinced dozens of women that he played bass guitar on the theme to Melrose Place, and even duped a former girlfriend into believing that it was against kosher law for him to look at his own feet. Three years later she dumped him, and this was widely considered to be a contributing factor. Recently, Matthew and his gang of burrito-swingin' buddies have gotten back into gaming: past favorites have included Chez Geek and Munchkin, two of the most geekily addictive games sense The Temple of Apshai and Choplifter. Remember Choplifter?! Eh? Hmm? ... No? Oh. Recently they've discovered The Settlers of Catan (along with various expansions), and there has been no looking back. Online, he can be found on xBox Live (gamertag: Hokeyboy) playing Crimson Skies and Whacked!, and is breathlessly anticipating Halo 2, SW: KOTOR 2, Jade Empire. He's also not averse to a few hunting rounds on City of Heroes. Unfortunately, he barely has time for any of that, since he recently started earning his MBA on weekends. Millheiser has also written hundreds of DVD reviews since 2000 (at DVD Talk and elsewhere), and, when he's not working, watching movies, biking, sailing, playing guitar or reading about the Civil War or Tokugawa Japan, replays Salma Hayek's snake dance from FROM DUSK TILL DAWN in his mind's eye. You gotta dream.
It's All True Walt Disney's Classic Cartoon Favorites Volume 4 Starring Chip N Dale Backbeat: Special Edition White Heat Aladdin: The Return of Jafar Heat: Two-Disc Special Edition Miami Vice - Season One Sky Captain and the World of Tomorrow: Special Collector's Edition Visions of Italy Youth of the Beast: Criterion Collection Musa: The Warrior (Region 0 Hong Kong Version) Catwoman Nine Good Teeth The Twilight Samurai Playboy's 50th Anniversary Celebration
Search for all Matthew Millheiser reviews
RSS feed of Matthew Millheiser reviews
RSS feed of upcoming Matthew Millheiser reviews