Kino // Unrated // April 10, 2001
List Price: $29.95 [Buy now and save at Amazon]
Review by John Sinnott | posted September 12, 2004 | E-mail the Author
Fatty and Buster made a total of 15 two-reel short, of which thirteen still survive. Arbuckle and Keaton Volumes One and Two from Kino contain ten of the surviving films, including two, Rough House and Back Stage, which appear here for the first time on home video.  This is a great collection of shorts with some wonderful comedy. For some background on these two comedians, see the review of the first volume here.

Back Stage: This film was a present to Keaton from Arbuckle after Buster was released from the army. (He was in the army 11 months during WWI. He spent most of his time in France entertaining troops.) It has a lot of skits that Buster used to do in his vaudeville days with "The Three Keatons." A nice number, with Buster and Fatty being stage hands. When the troupe that is supposed to be putting on the show quits, the guys decide to put the show on themselves. One notable gag: A prop house façade falls right on Fatty, but he is unhurt, standing right where an open window landed. This is a stunt that Keaton would latter do on a much bigger scale in Steamboat Bill Jr. 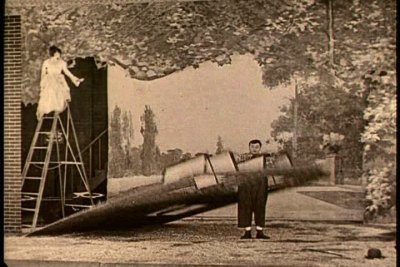 Good Night Nurse: This film never quite clicks. The first gag, where a drunk Fatty is out in a rainstorm trying to light a cigarette goes on much too long.  The rest of the picture seems like they are trying to hard to make it work.

Coney Island:Buster goes to Coney Island with his girl (Alice Mann,) but doesn't have the money to get in. Al St. John comes along, and offers to pay her admission, so she leaves with him. Meanwhile, Fatty is at the beach with his wife. She doesn't want to go the Coney, so he sneaks off to have some fun, and gets into trouble.  As a slice of history, it's interesting to see the rides and attractions of Coney Island in the late 1910's. A very enjoyable film.  It's also interesting to note that Keaton smiles in this film, as he does in a couple others in this set.  He had not yet decided on his "stone-face" persona that would be his trademark throughout his life.

This was the last short that Arbuckle filmed in New York. After this, he moved his crew to Hollywood. 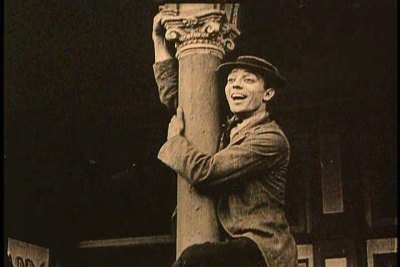 Rough House: One of the best in the series. The third film that Fatty and Buster made together, it is basically 25 minutes of hilarious mayhem. Mr. Rough (Fatty) has his relatives visiting. Al St. John is their cook, and Buster Keaton plays a delivery boy. This film is best described by quoting Keaton when asked about coming up with gags for these early films. "Things just started to happen," He said. That's the case with this picture, pretty soon Al, Buster, and Fatty are all fighting and throwing things. A wonderfully irreverent show.  The scene where Fatty's bed catches fire, and he tires to put it out, is priceless. 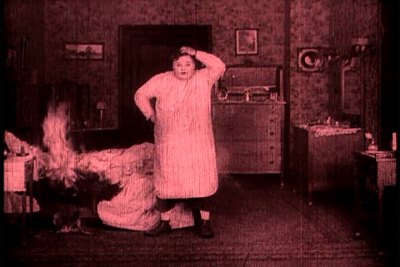 The Garage: This was the last film that Fatty made for Comique. Buster and Fatty work in a garage that doubles as the local police station and fire house.  Mayhem reigns.

The Garage was Fatty Arbuckle's last film for Comique. After that, he moved to Paramount, where he signed a contract that would pay him three million dollars over three year, including bonuses. There, Roscoe graduated to feature films, that did quite well, though few exist today. Unfortunately, his career ground to a halt when he was accused of murdering a young woman during a party in San Francisco. Though eventually cleared of all charges, his acting career was over. With the help of Buster Keaton, he started directing films, under the pseudonym William Goodrich. (He and Buster came up with the name; originally it was to have been Will B. Good, but they thought that a little too obvious.) He directed for Buster Keaton, and Marion Davies (William Randolph Hearst's mistress,) in addition to a multitude of comedy shorts. In 1932, he finally had the chance to get back in front of the camera and made a series of shorts for Warner Brothers. They did so well, that Warners signed him to a contract for
feature films. Unfortunately, he died of a heart attack in his sleep before he could film them.

Al St. John, Fatty's nephew and foil in several of these films, went on to star in his own two reelers. He never got the chance to star in features though. He did have a very successful career after the coming of sound as a character actor in westerns. He played Fuzzy Q. Jones in many westerns opposite such stars as Lash La Rue, Buster Crabbe, and Bob Steele.

After Fatty left, Buster Keaton became Comique's star. He was given his own studio, and left to his own devices. From 1920 to 1928, he made 19 shorts and ten features. Many of these films are considered masterpieces. They are still studied in universities and film institutes around the world. Buster is universally acknowledged as a genius, and one of the great treasures of silent films.

This DVD contains the best examples of these films in existence. They vary in quality of course, and range between very good to astounding. The best examples (e.g. Backstage) look just as they would if you were watching them in a theater 80 years ago. That is to say, there are a few nicks and scratches, and an occasional frame missing. But the images are clear, crisp, and not faded. At their worst (Out West) there are segments that are washed out, and, in a couple of places, a second or so of film missing. This is disappointing, but considering how many films made in the same period no longer EXIST, losing a second here or there does not seem to bad at all.

On the down side, Kino has restored the title cards to the point that they look almost new. Though the name of the movie and "Paramount Pictures" captions in the lower corners look fuzzy, the captions themselves look sharp and new. There are no imperfections in the black backgrounds. While one would thing this to be a good thing, it is in sharp contrast to some of the films, and keeps reminding the viewer that they are watching a restored film.

The musical score, composed and preformed by the Alloy Orchestra, is very good. Their music is appropriate without being overpowering. It adds a nice dimension to the films. There are a few assorted sound effects included, but these are made with the instruments of the band. A snare drum rap for a gun shot, for example. Of course, there were no written scores for these shorts originally, but everything on the sound track is something that you could have heard when these were originally released. (And probably much, much better than what was played.)

A minor quibble is the fact that the episodes do not appear in chronological order. It would have been nice to see the changes in Arbuckle's films as Keaton became more and more integrated as time went on. At the beginning, Buster played only bit parts, whereas at the end of the series, he was the co-star.

Even with these flaws, this is an amazing group of films that should be in the collection of every silent film or comedy aficianado.

This is a great collection.  The films are funny and the prints look great, especially for films this old.  This DVD belongs in every silent movie collection.  Highly Recommended.  Be sure to check out the review of the first volume here.