The Show
There's very little television out there that worked their comedy magic in as many ways as "Strangers with Candy." Jerri Blank (Amy Sedaris) has lived the life of a whoring, drug-abusing loser, but now she wants to start over by returning to Flatpoint High to graduate. The school is one big parody of the traditional afterschool special, dealing with every issue known to teenagers. The big difference is that Jerri's done it before, so now she brings experience to the table. Hanging out with her friends Fillipino Orlando (Orlando Abdo Patoboy) and red-headed Tammi Littlenut (Maria Thayer) is the only thing keeping her from getting into trouble with the school's triumvirate of power, Principal Onyx Blackman (Greg Hollimon), art teacher Geoffrey Jellineck (Paul Dinello) and teacher Chuck Noblet ("The Daily Show"'s Stephen Colbert.) Her home-life isn't much easier, with a jock step-brother named Derrick, a witch of a stepmother and a comatose, though active father (the show's best sight gag.)

Season three features some of the best episodes of the show's entire run, including the fantastic "Trail of Tears," featuring appearances by Will Ferrell and Andy Richte. The show really found its voice just in time for it to end, which is probably best. Too many terrific shows hang on past their peak, and end up disappointing. "SWC" never did. The unique and often surreal tone of the show, with the gay subplot involving Mr. Noblet and Mr. Jellineck, Blackman's insane comments and Jerri's utter madness, kept viewers on their toes. A top-notch cast, especially an against-type Colbert, makes the farce all the better. There really is nothing I can think of to say that's bad about this show.

The DVD
A two-disc set holds all 10 episodes from the show's final season on the air. The episodes are split evenly across the discs, with the majority of the show's extras placed on the second disc, and Comedy Central's promo extras on the first platter. The menus are nicely done, with footage of Jerri (from Episode 4) in the library watching old film strips, which take the form of the menus, complete with a warped version of the show's theme song. There are no language or subtitle options, though you can choose to watch the episodes in a marathon or separately. 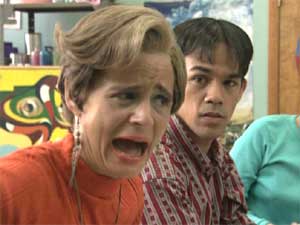 The episodes are presented in the order in which they were produced, not in the order in which they aired, so "Invisible Love" is Episode Six, instead of fourth. The two-sided covers on the ThinPak cases (enclosed in a cardboard slipcase) are hardly complete, with each missing guest stars, as well as having an incorrect list of the episode on the disc. Here is the breakdown of what's actually on the discs. and what the cases list:

Discs:
Disc 1: Jerri's Burning Issue, Is Freedom Free?, Trail of Tears, Is My Daddy Crazy?, Blank Relay
Disc 2: Invisible Love, Ask Jerri, There Once was a Blank from Nantucket, Bully, The Last Temptation of Blank

Cases:
Disc 1: Jerri's Burning Issue, Is Freedom Free?, Trail of Tears, Invisible Love, Is My Daddy Crazy?
Disc 2: Blank Relay, Ask Jerri, There Once Was a Blank From Nantucket, Bully, The Last Temptation of Blank

The Episodes
• Jerri's Burning Issue: Jerri finds out she has syphilis, and has to tell her boyfriend, who she just infected. The scene in which she finds out is hilarious, with great animation.
• Is Freedom Free?: A nude photo of Jerri is censored at school, sending her on a hunger strike to stop censorship. A Marilyn Manson parody is the highlight.
• Trail of Tears: When she goes too far with her racism, Jerri is sent to a camp run by Will Ferrell, where she discovers she's a Native American. Ferrell is funny as always, and Andy Richter lends a hand.
• Is My Daddy Crazy?: Jerri's new daddy is going off the deep end, endangering his appearance at Career Day. A guest spot by David Cross is superb.
• Blank Relay: The discovery of steroids helps Jerri and her teammates win and grow facial hair. Richter is back for more as a nutrition store clerk.
• Invisible Love: Jerri is dating the most popular guys in school, but can't be seen with him. One of the less-impressive episodes, but still good. 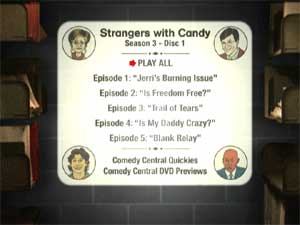 • Ask Jerri: The school newspaper needs a new advice columnist, so they turn to Jerri.
• There Once was a Blank from Nantucket: Sexual harassment hits Flatpoint, when Jerri plays the scat queen in the school jazz band. A ridiculous episode, thus fantastic.
• Bully: Mr. Jellineck and Jerri each have a bully to deal with at school. How they cope with it makes this a winner.
• The Last Temptation of Blank: The series finale brings special guests in the forms of Winona Ryder, Cheri Oteri, Mark McKinney, Janeane Garofalo and Paul Rudd. This take on the old "makeover" bet ends just the right way, in one of the most definitive ends to a series ever.

The Quality
The full-screen video looks better than I ever remember it looking when it originally aired. The animation, when used, can look a bit fuzzy at times, though, but that may be a source material problem. The colors look great, which is key, since this show took full advantage of color. There's evident grain and the show looks soft, but that seems intentional after watching some of the raw footage included in the extras. Aurally, the 2.0 Dolby Stereo tracks are solid, but nothing special. The mix is in fine shape, with the music sounding good when combined with the dialogue. A definite improvement over the original broadcasts.

On the second disc, there is a 25-minute "blooper" reel, which includes unused footage, alternate takes and simple weirdness, along with a dance-scene compilation. The remaining extra is a side-by-side comparison of the opening titles and storyboards. The two clip-fests are quite entertaining, though the video quality of the blooper reel varies wildly due to the material presented. When it fades to black, don't be quick to pick up your remote, because the featurettes do that often.

In addition to the listed extras, there's at least two Easter Eggs, one on each disc. Check DVDTalk's Easter Egg section for more info. 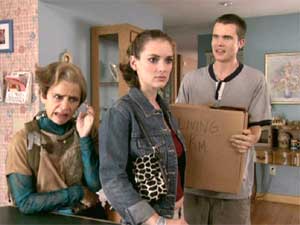 The Bottom Line
Another TV show that was ahead of its time ends its run on DVD with another great set of discs, making "Strangers with Candy" one of the most consistently impressive DVD releases for a cult show. Though the commentaries from the first two sets were missed, the additional footage inserted was a nice touch. I had almost forgotten how funny this show is, until I popped these discs in and started watching. Subversive, subtle and hilarious, this show is one of the best to ever grace Comedy Central's air. These three sets will make the wait easier for "SWC" fans until the upcoming movie is released.