Other (International) // PG-13 // November 27, 2004 // Region 3
List Price: $22.49 [Buy now and save at Pokerindustries]
Review by Joshua Zyber | posted February 3, 2005 | E-mail the Author
The Movie:
Director Zhang Yimou's career has taken an interesting turn lately. After decades building a reputation for carefully-observed, politically-minded character dramas, his last two pictures in a row have been big-budget martial arts epics. It's an unexpected change of pace that not everyone has been comfortable with. Although both Hero and now House of Flying Daggers were huge box-office hits in his native China, and Hero also opened fairly big in the United States, some of the filmmaker's older fans have accused him of selling out for mainstream success. Is that a fair criticism? Perhaps. Then again, maybe the poor guy was just tired of seeing all of his movies banned in his homeland and wanted to make something fun and beautiful to look at. Who can fault him for that?

In late 9th Century China, a Robin Hood-like society of revolutionaries has been stealing from the corrupt government to give to the poor. Local military captains Leo and Jin are ordered to capture the faction's leader within 10 days. To accomplish this, Jin goes undercover as a bandit calling himself "Wind" and attempts to woo a blind girl (Zhang ZiYi) suspected to be the leader's daughter, a plan that works all too well. As they escape from a series of traps that he and Leo contrived, Jin develops real feelings for the girl, and soon must inadvertently become a real criminal in order to keep his cover and protect her. Complications ensue, followed by not just one but two major plot twists, at least one of which is frankly pretty obvious early on.

Like Hero, House of Flying Daggers is a visual tour-de-force featuring vibrant, painterly photographic compositions and stunningly choreographed fight scenes. The use of visual effects and CGI are even better integrated in this one, seamlessly creating a fantasy world where warriors can fly through the air and a thrown blade can dodge and weave to a target at its master's will. The storyline, though complex on a basic plot level (the twists and turns are intricately structured, if not necessarily surprising), is a bit simplistic as a narrative, unfortunately, yet is still satisfyingly grounded in the rich emotions of its characters. Filmmaker Zhang remains a gifted storyteller even when, in cases like these last two films, his focus has shifted toward telling his stories through images and action rather than plot and dialogue.

House of Flying Daggers is a smaller, less epic film than Hero, with more emphasis on character and less on action. Nonetheless, it similarly contains some truly breathtaking scenes such as the early brothel sequence or the bamboo forest battle, and climaxes with a gorgeous finale (both visually and emotionally). It's more art film than action movie and won't be to everyone's liking (nor was Hero), but is a beautiful piece of work from a major filmmaking artist.

The DVD:
Back in October of 2004, before the film had even yet hit American cinemas, Edko Films in Hong Kong released House of Flying Daggers to DVD in a single-disc edition with a lousy transfer and no bonus features of any consequence. That disc was reviewed previously here. Apparently in reaction to complaints about the poor video quality, Edko already responded by remastering and re-releasing the movie in no less than two new editions at the end of December. A 2-disc Special Edition is available at many HK retailers at an MSRP of $22.49 USD (it can be widely found for about $15), while the more elaborate 3-disc Limited Edition box set priced at $51.99 has mostly sold out.

All three editions of the movie from Edko are hard-coded for Region 3 NTSC playback and will require a compatible DVD player to operate. Sony holds the American distribution rights to the film and is preventing U.S.-based retailers from selling foreign copies, so any of these discs will need to be imported.

Limited Edition Packaging:
The 2-disc Special Edition is packaged in a standard single-width keepcase. You can easily tell the difference between this version of the movie and the older single-disc release with the terrible video transfer because the characters on the new cover art are all positioned at a slanted angle.

The entire 2-disc set, keepcase and all, is stored within the larger Limited Edition box set. The DVDs inside are identical to those sold separately. The oversized box itself measures 11" x 9" x 2" and is quite lovely, especially once you remove and unfold the contents. Exclusive to the Limited Edition are a soundtrack CD (the third disc), a collector's certificate, a "bamboo" pen (it's really plastic), a set of four dagger-like bookmarks, and a 144-page Making-of Book. The text of the book is entirely in Chinese, but it has a lot of terrific full-color photos, production art sketches, and storyboards. The book is really fantastic. 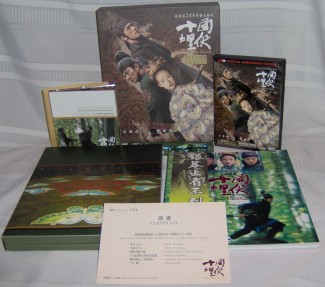 The Limited Edition is geared toward the collector who fancies elaborate packaging. For those not impressed by such things, the 2-disc Special Edition contains all of the same video-based material, so you can rest assured that you aren't missing anything important.

Video:
Edko's initial DVD was poorly converted from a PAL source and had a host of problems with its picture quality including image shimmer, ghosting, and a generally dupey appearance. The most distracting annoyance, however, was its severe white crush that obliterated detail in bright portions of the screen. The remaster on the new editions is a brand new NTSC transfer that, although still imperfect, resolves the most serious of these problems.

The movie is again presented in its original 2.35:1 widescreen aspect ratio with anamorphic enhancement. The white crush from the old transfer is completely fixed. I still feel that overall brightness and contrast levels are too light, but visible detail in bright images is much improved. This is especially important during the movie's snowstorm climax, which was unwatchable before but looks fine here. Color saturation is also a little bit better, though it could still be more vibrant.

The disc has no serious edge enhancement problems, but the image overall is rather soft and looks heavily filtered. Close-ups generally have a good sense of detail, but wide shots are less impressive and lose definition. Digital compression quality is just adequate. Most of the shimmer from the previous edition is gone, but film grain looks noisy and there are visible compression flaws in areas of the picture with complex detail.

Considering what the previous transfer looked like, Edko's remaster is a big improvement and is now definitely watchable on the whole (it looks a lot like their disc for Hero), but is still just mediocre and does not do full justice to the movie's richly textured cinematography.

Audio:
As before, where the picture quality fails, the audio quality picks up the slack. The old disc had a full bit-rate 1509 kb/s DTS 5.1 soundtrack that I scored with a perfect rating. How could you get better than that? Well, the new track (again full bit-rate) is encoded as a DTS-ES Discrete 6.1 mix. The old soundtrack matrixed very well into a center channel, so this actually doesn't make too much of an audible difference, but it is a slight improvement. Also in this disc's favor is the fact that, since the transfer was not converted from a PAL source, the playback speed does not suffer from the 4% PAL speedup. I didn't even notice any pitch problems the last time around, mainly because I don't speak Chinese and wasn't bothered by the speaking voices, but the true NTSC playback speed is again a slight improvement.

Everything else I said about the DTS soundtrack in my previous review still stands. The track has outstanding breadth and dimensionality. It's crisp, spacious, highly directional, and has clean, rocking bass. Surround effects fill the entire rear soundstage, including a center channel. The mix as a whole may not be as overwhelming as that for Hero, just as the movie itself is more restrained, but it's still a fantastic sonic experience.

A Dolby Digital 5.1 track is also available for those not DTS-capable, which is also fine though it doesn't blow your socks off quite the same way. If you have the equipment, go with the DTS.

Both primary audio selections contain the original Mandarin language soundtrack. A Cantonese dub track is also available in Dolby Digital 5.1. Optional English or Chinese subtitles have been provided. The English subs are identical to those from the last disc and appear half-in and half-below the 2.35:1 picture. This may not bother the majority of viewers but is an annoyance for those front projection users who mask their screen to the wider ratio.

Glitches:
Now here's a problem. Edko's initial batches of both the 2-disc Special Edition and 3-disc Limited Edition have several authoring glitches that cause the movie to freeze up on many models of DVD player. This happened on my copy with some annoying stuttering during the bamboo forest battle just past the hour mark and a complete lock-up at around 1:25:00. I couldn't get it to play past the second area without skipping ahead a chapter. This is unacceptable.

Edko has thankfully issued corrected copies of the 2-disc set, and some retailers are offering exchanges to those affected, but I haven't yet discovered a reliable way to tell the old batches apart from the new fixed discs short of playing the movie all the way through and hoping for the best.

Since the Limited Edition was... well... limited, no new copies of that version are being released. Fortunately, as I mentioned earlier, the DVDs inside the box including the keepcase are identical to the separate 2-disc set, so it shouldn't be too much trouble to just switch out that portion of the package. Sadly, when I attempted to convince the retailer where I bought the Limited Edition of this fact they were having none of it and I was forced to spend extra to buy a new copy of the 2-disc set.

Extras:
While it's true that a whole second disc has been provided for bonus features, there's really nothing there to get too excited about. Most everything is just filler.

There are four still galleries: photos, set sketches, props, and costume design sketches. Each is presented as a slowly paced animated montage. Five site visits present clips from the movie with text information about where and when they were filmed. The cast & crew bios are only available in Chinese text and are pretty useless for English speakers. Then there are six storyboard comparisons.

What should be the most substantive feature is the 45-minute Making-of documentary, but unfortunately the piece has only Chinese subtitles with no accommodation for an English speaking audience.

No ROM features have been included.

Basically, the entire supplement disc is just fluff and can be entirely skipped.

Final Thoughts:
Edko's newly remastered House of Flying Daggers DVDs are big improvements over their shoddy initial release, but are still fairly mediocre in picture quality. I'm conflicted as to what purchasing advice I should recommend for this title. Based on the quality of the movie, the soundtrack, and the fancy packaging of the deluxe Limited Edition, I'd like to call it Highly Recommended. On the other hand, the so-so video transfer and authoring glitches make me want to Skip It. I guess I'll split the difference and give it a flat Recommended rating.

Normally I would say that interested viewers should wait for the upcoming Region 1 release from Columbia TriStar, but unfortunately that disc will likely contain the American theatrical cut of the film, which was trimmed in a few of the bloodier scenes to get a PG-13 rating.