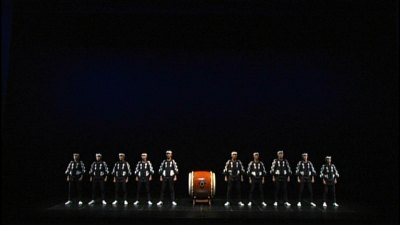 Despite having performed worldwide for nearly 25 years now, One Earth Tour Special was the first I'd ever heard from Kodo, a Japanese taiko group. For those unfamiliar with the term, taiko (roughly translated as "big drum") is a theatrical style of music largely based around percussion and chanting. The group's name has a double meaning---"heartbeat" and "children of the drum"---emphasizing their desire to play with the heart of a child. Their visual flair, stage presence and precision timing make Kodo's performance style a truly unique art form in itself.

In all, Kodo has released roughly a dozen albums and several home video performances since forming in 1981. Their live shows have been enjoyed by audiences on every habitable continent, making them the most renowned name in taiko music the world over. Their side projects have included collaborations on the soundtracks for The Hunted and Nasca Fantasy. Before you ask: that wasn't their music heard during the anime classic Akira, but fans of that soundtrack will have no trouble enjoying the music of Kodo. It's powerful, emotional, and---in the case of One Earth Tour Special, their most recent live DVD release---a lot of fun to watch. 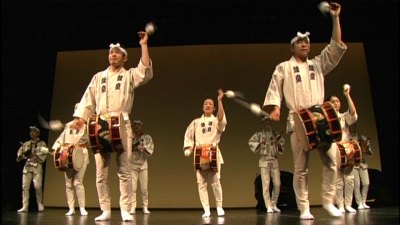 Recorded on November 20-21, 2003 at Setagoya Public Theater in Tokyo, this 109-minute performance really covers the bases well. There's a broad range of styles, emotions and tempos represented, not to mention the most impressive drum solos I've seen in recent memory. The choreography and timing exhibited during this performance is nothing short of astounding...just watch, and you'll see. There are 12 songs in all, with each lasting roughly 10-15 minutes apiece.


Overall, the background info and complimentary adjectives I've offered don't do this show justice. If you're new to Kodo (or taiko in general), One Earth Tour Special is about as good a starting point as you're going to get. Although the DVD treatment could have been a little more polished overall, Sony Music Japan has done a good job bringing the show home for us poor saps stuck in Region 1. With a solid technical presentation and a few notable bonus features, there's a great deal of enjoyment here for the low asking price. Enough small talk---let's see how this release stacks up, shall we?

Quality Control Department
Video & Audio Quality:
As if the screen captures and cover art didn't spoil the secret already, there's a lot of black on the screen at all times. While the overall image quality could have been a little sharper overall, there's a great amount of detail and contrast present on this 1.85:1 anamorphic widescreen transfer. Colors are bright and clear, and there's no major digital imperfections to be found. It's about as good as expected for such a dark visual style, and won't disappoint any fans of live concert performances on DVD.

The sound mixes found here are another highlight, offered in either standard 2.0 Stereo or 5.1 Dolby Digital Surround. The 5.1 option really puts the viewer in the middle of the action: Kodo's dynamic, energetic music sounds great on DVD and captures the "live" feeling quite well. For those without a surround setup, the 2.0 mix is no slouch either, offering clear sound and a fine dynamic range. There's only one complaint, though: despite the music's instrumental nature, there's no English subtitle option available during the entire performance (taking away some of the impact of the chants). This isn't a major issue, but it's one that could have been fixed easily.

The overall design scheme of these fullscreen menus is quite simple, offering bilingual descriptions and relatively simple navigation. The 106-minute performance is divided into 12 chapters---one for each song---and no layer change was detected during playback. This release is packaged in a slim double keepcase, and a nice insert booklet includes a few photos and essays about the band from several key members. The outer packaging seems a little sparse, however: there's little more than a track listing on the back, and a little bit of history about the group could be helpful for new buyers.

The DVD itself contains only one notable extra: To Sado and Beyond; essentially, an extended version of "Sado e" set to beautiful footage of Sado Island in Japan (the group's stomping grounds). Like the performance itself, though, there's no English subtitles found anywhere (the bulk of this piece is instrumental, but there's a short dialogue at the beginning that's entirely in Japanese). An unfortunate oversight, though the music and visuals are stunning. The other key extra is a Bonus Disc that includes a slightly condensed version of the performance on CD (the only exclusions being tracks 3, 4 and 6). Although the stereo mix isn't quite as powerful as the DVD's 5.1 counterpart, it's still a thoughtful inclusion. Overall, there's certainly a fine assortment of content for the asking price, though a longer documentary about the band (with subtitles!) would have really hit the spot.

What a nice surprise! It's always good to be turned on to new music, but it's another matter entirely to see such a powerful and energetic performance for the first time. Overall, Kodo: One Earth Tour Special does a terrific job of covering all the bases: it's good for the eyes and ears, and the DVD features an excellent technical presentation and a few interesting extras. For the asking price, this 2-disc set is a great choice for new and seasoned Kodo fans alike. Recommended.