Vince has never been one to miss the pulse of pop culture and current events. Be it the controversy of the Desperate Housewives/NFL promo, to the discrimination other nationalities might be experiencing [the French and Iraqis]. For this pay-per-view, he decided to make the fans a part of the show by allowing them to control certain aspects of each match during "Taboo Tuesday". 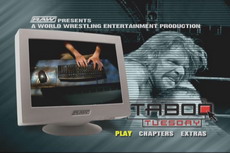 What's "taboo" about it? Beats me.

Fans who went to WWE.com were given options such as "What should the Divas wear during the Battle Royal?" to "What weapon should Kane and Snitsky use to beat each other senseless?". Being of a conspiratorial mind, I truly believe that most, if not all, of the matches were already predetermined. In fact, during the PPV, after Coach announces the options, he tells the audience which one they've chosen even if it wasn't the one that got the loudest applause. And it was always the one that the online fans chose too. Coincidence? Hmm...

Taboo Tuesday took place on October 19th, 2004 in Milwaukee, Wisconsin. The disc runs 2 hours and 50 minutes which, as with other WWE discs, considering the potential of the material here is pretty short.

and a "DVD Exclusive": 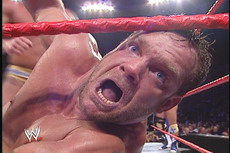 Video: For the amount of content on the disc, this was an attractive transfer. It's presented in the full frame 1.33:1 ratio and the picture is pretty sharp. Colors are bright and there were only slight instances of compression artifacts.

Audio: The Dolby Digital 5.1 sound was crystal clear and enveloped my living room while I was watching it. You're also given the option of watching the disc in Spanish.

Conclusion: As i've said in past WWE reviews, Raw is my favorite brand of the two and this disc has some pretty good matches [the Benoit and Flair matches stand out]. I do wish that they'd decided to make the Press Conference "extra" a bit longer, but I realize that would probably compromise the video/audio quality. Regardless, this is another great disc from the WWE that would be Recommended for wrestling fans.