The Film
When I first was dating my wife, her grandmother was placed in a nursing home, and being the good boyfriend I was, I went with her when she would go for a visit. It's very hard for me to do, because invariably, there will be lonely old people in the hallways, looking to grasp any chance at connection possible, even if it's a stranger walking by. It's not that I wouldn't talk to them (though I tend to avoid eye contact) but I hate to face the idea of aging. It's not a vanity thing. It's just a "I'm having a really good time at this age and I'd rather that not change" thing. Plus, I'm not too keen on the concept of death. Call me crazy. I'm still wary of nursing home visits to this day, but I'm getting better.

That said, the retirement home at the center of Sunset Story is a fascinating idea. A place for the "free-thinking elderly", Los Angeles' Sunset Hall is populated by radicals and activists who are now retired, but certainly not out of the game. A home where the bookshelves are lined with the works of Lenin instead of Reader's Digest is bound to be ripe with stories for a documentary. But when one was made, it wasn't the politics that took center stage. Instead, a friendship born in Sunset Hall is the story, one that is humorous, touching and heart-wrenching, all at once.

Lucille Alpert, a former social worker, and Irja Lloyd, a former special-education teacher, became fast friends when they moved into Sunset Hall within a short time of each other. Lucille, a wise woman of 95, who was reminiscent of Fran Fine's grandmother Yetta, from "The Nanny," is the perfect counterpoint to the younger (80), quieter, and more active Irja, who gets around in a wheelchair. They go everywhere together, with Lucille holding onto Irja's chair, forming a unity that serves as the perfect visual metaphor for their relationship. 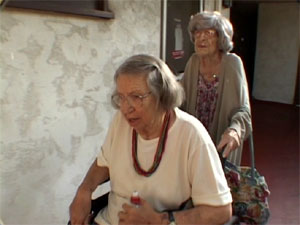 The short film (just over 70 minutes) follows the dynamic duo to their favorite diner, to the doctor and to rallies, answering off-screen questions about life, their pasts and sex along the way. Their still-active minds can still be quick as a whip, and befitting former activists, they have a bit of an attitude to boot. To watch these women maintaining their beliefs even after decades in "the struggle" is inspiring.

At the same time, to see the residents of Sunset Hall, a group that includes several people suffering from advanced mental diseases, spend their days as young minds trapped in broken-down bodies, is extremely sad. The frustration they must feel is overwhelming, though no one lets it show. Even the steeliest protester can't tell old age "Hell no, we won't go," and Lucille and Irja, though better off than many of their Hall-mates, aren't immune from the ravages of time themselves.

There are likely plenty of other interesting stories still to be told in Sunset Hall, but by going intimate, and focusing on two of the people and not the politics, Sunset Story earns its biggest strength, that being sympathy for the suffering. It's hard to get younger people to care about the elderly that aren't related to them, but this movie achieves this by showing Lucille and Irja as people, and not elderly. These are not women waiting to die. They are women living their lives.

The DVD
Packaged in a clear keepcase with no insert (and, worse yet, no two-sided cover ro take advantage of the case), Sunset Story comes home on one DVD. The full-frame static main menu has options for playing the movie, selecting scenes, viewing the special features and adjusting the subtitles. The scene selection menu is just a list of titles for each scene, while the only subtitles are in English. There is no closed captioning. 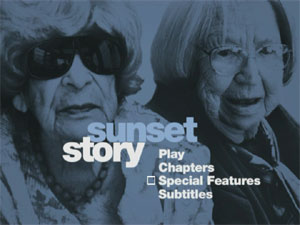 The Quality
Shot on full-frame video, the movie shows its stock, with plenty of washed-out whites and harsh shadows. There's some occasional pixilation and grain and digital noise become obvious in darker scenes. For the most part though, the film looks good for what it is, as the color is proper and the encoding . The audio, reproduced in Dolby 2.0, is your standard documentary mix, which is exactly what this story needed.

The Extras
A pair of feature-length audio commentaries is included, which is something of a shock for such a low-profile project. Up first are three producer points of view, from Laura Gabbert, Caroline Libresco and Eden Wurmfeld, while the second track features Gabbert again, this time as a director, editor William Haugse and Shana Hagan, the cinematographer. As expected, the first track is more about how the film came together, while the second focuses more on the shooting and other similar technical matters. Neither track jumps out as something special, but they aren't dull either if you are interested in knowing more about the film. Oddly, there's a "fun" feel to the conversations, which is a bit unusual for a film that's not exactly a laugh riot.

15 deleted or extended scenes are included from the movie, totaling over 33 minutes of footage. The scenes can be viewed separately or by using a "play all" function. It's really just more of the same, so if you were fascinated by the main short, these additional scenes will sate your thirst for more of those rambunctious seniors. If not, skip it.

To help explain the home, two interviews with staff from Sunset Hall are included, one with the activity director and one with the director of staff, for a combined 12 minutes of footage. In addition to text bios of the main crew, more info about the film and its making is found in the 14-minute Q&A session at the 2003 LA/IFP Film Festival, which included the primary crew and Irja. Shot with the skill of one of those bootleg in-theater tapings, it's blurry and dark, but the info is all good.

The final two extras are welcome additions, that being the film's theatrical trailer, which shows how the producers tried to sell the movie, along with a gallery of poster concepts that have some real creativity. 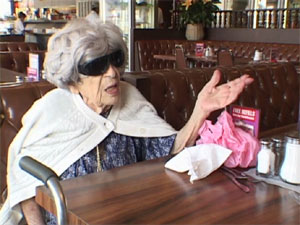 The Bottom Line
No one likes to think they will be old one day, especially the elderly. There's always someone older than you, and until they die, you still can feel better about your own advanced age. But when that person is someone you care about, those kind of concerns become awfully petty. Thus, seeing the politically active residents of Sunset Hall remain young at heart is life-affirming, until the end and after. For a short documentary about a not-so-popular topic, the DVD presentation goes beyond the call of duty, even if not all of it is enthralling. Documentary fans and those interested in the real history of activism should find this flick worth checking out, but most Blockbuster-goers will have a hard time picking this up, as it's not exactly Friday-night fun.