With their seventh Mystery Science Theater Collection Rhino releases one of the best sets to date. Featuring three shows from the fourth season, the show's golden age, and a solid effort from season 8, all of these experiments are winners.

Most of you reading this are probably already familiar with Mystery Science Theater 3000 (or MST for short.) For those of you who might have missed it, here is the concept in a nutshell: Joel (later replaced by Mike) is trapped on a satellite in space by an evil scientist. This mad man (or his mother in the later shows) tortures poor Joel by forcing him to watch really bad movies. To keep his sanity, Joel has used parts from the ship to fashion robots, Crow and Tom Servo, who watch the movies with him. While these movies are playing, Joel, Crow and Tom are silhouetted at the bottom of the screen and crack jokes at the movie's expense. It sounds simple, but it is one of the funniest shows to ever air on television. One of the reason's for the show's success is the fact that the jokes come form all over. They will throw in references to pop culture, ancient history, current events, movies, music (classical, jazz, country or rock,) politics, famous people, (and not-so-famous people) and just about anything else you can think of. Some of the trivia they come up with is so obscure it is amazing.

Of course, the quality of the movies they pick are almost not an issue. As a general rule, the worse the movie is, the better the show will be. (As evidenced by Manos, Hands of Fate. A totally abysmal film that is arguably the best episode of MST ever. Read my review here.) In any case, I'll give a brief synopsis of the movies, as well as a review of the quality of the episode. 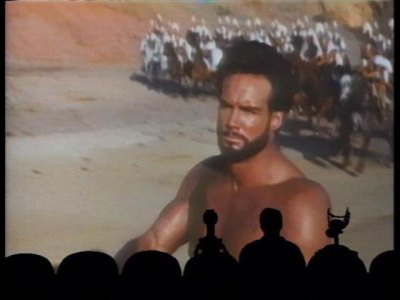 Joel : This is like Empire Strikes Back, only..not all that great.

In this second Hercules movie, the last to star Steve Reeves, the Greek hero wanders around with his pal Ulysses in a loin cloth showing off his muscles. After opening a can of Wup Ass on a guy who gets his strength from the ground, he drinks from the Fountain of Forgetfulness, and forgets who he is. (D'oh!) An evil queen captures Herc and with daily doses of the fountain's water, keeps him around as her boy-toy. It's up to Ulysses to save his friend from the horrible fate of unending sex with willing, hot babes.

Crow: Brass! I can't bend it. Guess I have to stay here with all the nymphs.

This was a fun show with a lot of riffs at Hercules expense. Joel and the bots keep the jokes flowing, and the movie has a least a little bit of a plot to keep viewers interested. There are also a great host segment where the naive robots ask a nervous Joel what Hercules and the nice women are doing off camera. All around a funny episode.

Episode 410 - Hercules Against the Moon Men:

Crow - Wait, he can bend steel but he can't break through a net?? 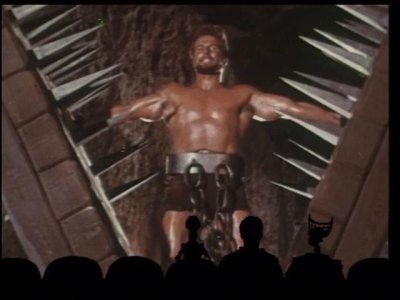 Hercules is back, but this time it's Allan Steele in the leather miniskirt. Herc finds himself knee deep in another plot involving an evil queen, this time it's Queen Samara who has been making human sacrifices to aliens from the moon. The muscle man checks it out and ends up fighting a monkey creature, some rock men, and having to get through a really long and boring sandstorm.

Adam Tyner, in his review of this set remarked that it would have been better if Rhino has selected another episode, rather than have two Hercules movies back to back. While I agree with that, I like this experiment a lot better than Adam did. It isn't as good as Hercules Unchained, but it still has some great moments.

There's a lot in this movie to make fun of; the clothing, the moon men, and the silly rock creatures that can't raise their arms. Joel and the bots make the most of it, laughing their way through this truly awful movie. The never-ending sandstorm, and all of the complaints it elicited was a great example of MST turning really bad film making into great comedy.

Joel: Guys, I think I'm beginning to give into..Deep Hurting!

The host segment with the mad scientists this time around is really good. They let Joel know that this experiment is going to involve "Deep Hurting! Deep Hurting!" which it does. While this is the weakest effort in the set, its still a solid effort. 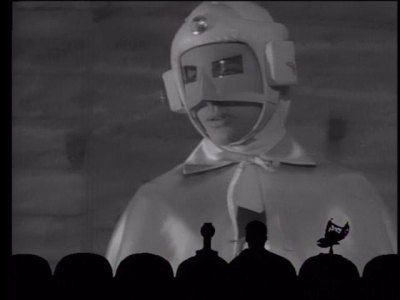 Crow: His power lies in his ability to choose incompetent enemies.

A wonderfully cheesy Japanese sci-fi movie is riffed in this episode. When beak-faced chicken-aliens from the planet crank whore, opps I mean Krankor, led by the Phantom of Krankor try to take over the Earth, the only person who can possibly stop them is *da-ta-da* the Prince of Space. You see the Krankor weapons don't work on the Prince, though he does have the tendency to run away during battles even though he's not hurt.

This is one of the strongest shows from the Sc-Fi Channel days. It just works all around. The movie is outrageously goofy and almost seems to be playing into the writers hands at times. Mile and the bots are in top form, and riff constantly throughout the movie. How could they NOT come up with a show full of jokes? The costumes alone are a laugh riot, and the little kids (it's a Japanese SF movie, it has to have kids in it) in their unsettling short pants are just ripe for being made fun of.

Crow: I have no superpowers, but I can skip reasonably well.

This is one of those episodes that you can watch again and again. It seems to get funnier every time I see it.

Episode 407 - The Killer Shrews (with the short Junior Rodeo):

Joel: Go ahead, strip me of my dignity at age four. What are you looking at!?!

This movie starts off with a short about an old man who convinces some children to put on a rodeo for kids. The jokes fly as frequently as the kids do. The managed to refrain from any PETA jokes, making fun of the kids, and the adults watching them. A great little short.

Tom: Ya know, it seems that being a cowboy would kind of suck.

Joel: Does anyone know the plot yet?

The captain of a small ship is taking supplies out to an island that houses a small group of scientists when a hurricane blows in. He's trapped on the island, and discovers that the scientists have accidently created giant, poisonous, shrews that look like dogs with bath mats on their backs. They've eaten all the animals on the island and so the starving animals set their sights on the humans in their gated compound.

Crow: They're just puppies. What's he running from puppies for? 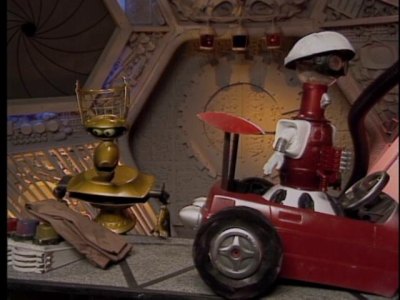 This low budget B-movie is the prefect fodder for Joel et al and make yet another great episode. The stupid looking 'shrews', constant drinking by the characters and inane subject create a lot of great straight lines for the Satellite of Love residents to play off of. The jokes are fairly constant and uniformly funny.

Joel: I think I just heard Griswold explode? Did you?

This episode also has one of the best opening segments the show ever did. It's "Present Day," and Gypsy gets a the Little Mermaid Play set she's always wanted! Joel gives Tom a scale race car that he can ride in. It will got 30 MPH, has a cool stereo, and if he runs into a wall, the car just bounces back and heads in another direction. Joel's save the best for last though, and give the excited Crow...a pair of dress pants from J. C. Penny. To add insult to injury, Tom doesn't let him forget what a great present he's received.

The audio on the host segments is very clean, and the riffs coming through loud and clear. The audio during the movies are pretty good, though the film's soundtracks leave a little to be desired. They actually do a very good job mixing the audio from the movie in with the actor's comments, adjusting the levels so that both the riffs and the movie can be heard. Of course there are a couple of times when one or the other isn't as easy to discern, but that is fairly rare.

The only movie that had really bad audio was The Killer Shrews. There was a hum through the movie and it was also scratchy. With MST, that's not really a drawback, and the show was aired that way.

After watching this show for years on the S-VHS copies that I taped off of Comedy Central when it was first broadcast, I was very pleased at how clear it was. My S-VHS tapes are good but this is much better. The host segments are clear and bright, while the silhouettes during the movie are solid black. The quality of the movies themselves leave something to be desired, but they look just as faded and scratchy as when they were first shown on MST3K, which is how it should be.

The highlight of the extras is Assignment: Venezuela. This short was never aired, it was made for a CD-ROM project that was never completed. It was only ever released as a mail order VHS tape from Best Brains. This is the first time it has been widely distributed.

Mike's the host for this show which follows a petroleum engineer as he is transferred to Venezuela and boy, this guy really likes oil. In any case, Mike and the 'bots riff on his letters home to his family as he describes the country and the wonderful Quonset hut that they'll be living in.

Running about 24 minutes, this short is okay but not outstanding. The jokes were fairly average but still enjoyable. The print used still has the time code on burned in and the silhouettes were soft, but it was fun finally seeing this rare short.

The first short that MST3K broadcast after the show moved to the Sci-Fi channel was Century 21 Calling. It originally appeared in episode 906, The Space Children. This short, which involves a pair of kids discovering what Ma Bell has in store for us at the 1962 Seattle World's Fair was also just mediocre. There were some good moments, but overall the result was uninspired.

Jumping from the first Sci-Fi era short we come to A Case of Spring Fever which was the last short ever shown on Mystery Science Theater. *sniff* (It accompanied episode 1012, Squirm.) At least the shorts went out with a bang. This odd film is about a man who wishes that there were no springs in the world. In a bizarre, twisted parody of It's a Wonderful Life, a Spring Sprite grants him his wish, and he gets to see how the world would be changed if springs didn't exist. The horror...the horror. An easy short to riff since it was so dumb to begin with, but Mike et al do a good job making this goofy short even funnier.

I have all of Rhino's four episode sets, and this is my favorite so far. All of the shows are funny, and most of them have a high replay value. The rare bonus material is just icing on the cake. If you are a fan of Mystery Science Theater, run out and snag a copy of this. DVD Talk Collector Series.