While not the #1 footballer in the world in terms of skill and accomplishments, David Beckham is almost certainly the most recognized player in the world's most popular sport and arguably the most famous athlete on the planet. His many years with Manchester United, the world's richest sports franchise as of 2004, and his status as captain of the England National Team placed him into the International spotlight, but his high-profile marriage to Posh Spice (Veronica Adams), his rugged good looks, and his ever-changing sense of style and fashion have helped make him a media super-celebrity unlike any other. Beckham's star shines so bright that Spanish club Real Madrid purchased him from Man U for around $41 million not because they needed him on the field but because his presence would likely generate an estimated hundreds of millions of dollars in marketing revenue. In this two-disc DVD release from Capital Entertainment, Becks himself instructs a group of young players, as well as the viewing audience, in the basic fundamentals of the beautiful game. 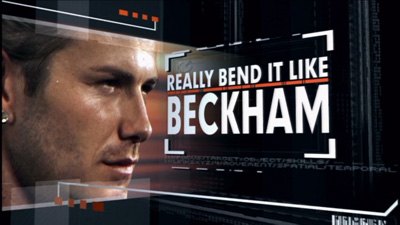 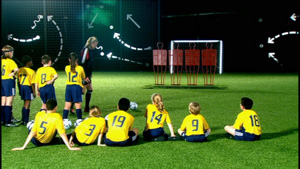 The main content of Really Bend it Like Beckham: David Beckham's Official Soccer Skills runs about 100 minutes in length and is a series of instructional sets with Beckham demonstrating a skill and discussing its relevance followed by a group of young footballers practicing that skill in repetition. Each demonstration is shown from multiple angles, forward and reverse, and in real-time and slow motion. The target audience is young players (probably 12 and under) who have some experience with the game as well as their parents and coaches. Appropriately, the instructional set begins with an array of first-touch ball control drills. As any footballer will tell you, a good first touch on the ball is just about the most important skill one can possess, and focusing heavily on receiving a pass in a position where you can quickly and effectively play the ball on the second touch is a logical first step.

Progressing from the first touch, Beckham then goes into some detail on how to create space for yourself immediately after making that touch, demonstrating a few popular and effective misdirection maneuvers like the step over and Cruyff turn. As the students gain some grasp of these concepts, he moves on to various passing skills, focusing on both the two-touch and one-touch pass as well as the classic one-two give-and-go and then returns to individual ball-handling skills forwards would use, such as working with your back to the goal and turning into free space.

Having covered many aspects of the small-space skills, the instruction opens up a bit with some long-ball drills. Beckham covers elevated crosses to the back post as well as the more difficult low-to-the-ground cutback cross and then gives the students a chance to practice their favorite aspect of the game: finishing goals. A wide range of methods is explored here, from the straight power shot to more aerial moves like the header and the volley. The students also spend some time in 1v1 scenarios where they can utilize some of the ball control skills practiced earlier in the lesson. 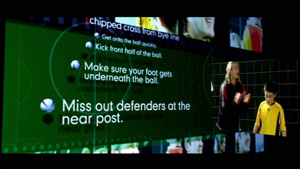 Nearing the end of the session, Becks spends an all-too-brief amount of time on defense. Learning proper defensive techniques is every bit as important as offense, but it isn't as fun or glamorous, so it is often short-changed. To his credit, Beckham does share a very good 1v1 defensive drill where two players face off -- one with the ball and one mirroring his movements -- and are flanked on the sides by cones spaced about 10 feet apart (slightly closer on the defensive side). This is a speed drill where the offensive player fakes back and forth with the ball until making a definitive move for one of the cones. The defender's job is to continually anticipate those movements and beat the player to the cone. It's an excellent drill that helps both players with their footwork.

Finally, the instruction wraps up by living up to the DVD's title with some free kick examples. While Beckham doesn't give too much insight into the specifics of how to "banana" the ball as he's so famous for doing (something that's admittedly very difficult to teach), he does set up some effective scenarios and gives the students a chance to bend a ball over and around a virtual wall of defenders.

Likely proceeding from the assumption that viewers of this DVD will have the attention spans of MTV junkies, the manner in which this instructional set is presented is very spastic, with significant amounts of shaky camera movement and zooms. Between each drill are brief cuts of Beckham performing a similar skill in a game environment or short clips of him answering personal fan-like questions from the kids. It gets pretty annoying how the action is broken up in this way, but fortunately the DVD contains a "Play All Skills" mode as well as a "Play All Timeout Talks" mode, so the viewer can easily filter out what he does not want. Although I personally found this approach distracting, I must admit that it will probably be an effective one for kids who probably cannot sit through something more dry and overly structured. 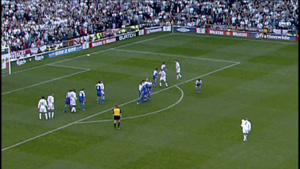 While I think the skills presented here are certainly important to learn, very little detail is given on how to specifically achieve the desired result. Beckham performs the action near perfectly, and then the youngsters come by and often do it completely wrong. His only response to their work is "brilliant" when they do anything that isn't completely terrible or "unlucky" when they do. These are young children, and you certainly do not want to harp on the negatives or remove the fun from the learning experience. However, by not pointing out at least some of the flaws in their execution, they're never going to get any better. I would have liked for Beckham to stop some of the students once in a while and show them how to do it properly and let them try again. Otherwise, it's entirely possible that viewers will fall into the same bad habits demonstrated by the participants on this DVD.

As mentioned, this main track on the DVD runs 100 minutes, but there is quite a bit of fluff, and material is often repeated. After filtering out all the innocent "what's your favorite food" questions and interview clips, there is barely an hour's worth of actual instruction, and even some of that is repeated. The skills themselves are good ones to learn, but with all the jerky camerawork and spliced presentation, I'm not sure how effective any of it is as an actual teaching tool; and since this DVD is made for Region 1 audiences who largely do not know much about International football, I don't see much value in all the personal discussion with Beckham himself. If your child loves the game, he may find great use and enjoyment in this. Then again, he may be bored to tears. How's that for an endorsement?

In a little bit of overkill, this DVD set is presented in anamorphic widescreen as well as Dolby Digital 5.1 surround. The video looks pretty good on the whole; however, the brightly lit indoor environment where the action takes place serves to wash out some of the detail. The audio, on the other hand, is really annoying. Beckham speaks softly to begin with and as he's talking with children, it's clear that he's using his "indoor voice". In poor contrast to this, there is a significant amount of background music and "swoosh" sound effects, and the bass on these clips is so strong that it completely drowns out the dialog. To make it through this DVD without waking the neighbors and yet still hear the speech, I had to just turn my subwoofer off completely, and even that was barely acceptable.

Of note, these discs can be watched in English, Spanish, or French, and it's not just the audio track that is affected, but the menus are multilingual as well. 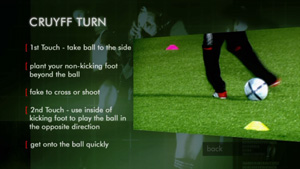 For a relatively limited amount of content, the menuing system does a really good job branching and organizing all the different material. As already noted, there are three ways to watch the content in bulk: "Play All", "Play All Skills", and "Play All Timeout Talks". In addition to that, there is a "Skills Select" mode that allows the viewer to drill down through the different skill sets and jump to a specific drill. Also, there is a "Practice Area" section where the DVD split-screens into a list of key points to achieving a skill on the left and Beckham's demonstration on the right. After watching the DVD in its entirety, this will be a more practical way for viewers to return to each skill. 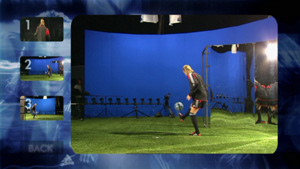 The second disc contains the "extras", but there really isn't anything here worthy of significant mention, and the addition of this disc is almost entirely superfluous. There is some "Extra Footage" that is a compilation of some behind-the-scenes clips from the filming process and additional questions being asked by the students. Also included in this is a short 8v8 game with everyone who participated in the drills. "Special Effects" collects the different transitional clips used in the main production -- isolated slow motion clips of Beckham performing various tasks -- and can be played from here. Also repurposed from the main production, "David Beckham's Football Highlights" groups different key moments from his career all in a row in one location. As all of this material is on the primary DVD, this is just repetitive. In total, these pieces run about 40 minutes in length and do not add much of anything to the overall presentation.

Although entirely gratuitous, the last extra on the video portion of the disc is a multi-angle segment of Beckham juggling, trapping, and balancing the ball on his head and the back of his neck. In real-time, the viewer can flip between different angles of this exercise, and while it doesn't have much replay value, it does look pretty cool.

Finally, accessible from a personal computer's DVD-ROM drive, there is a 13-page "Coaching Plan" for coaches (also multilingual) in .pdf format. This playbook includes diagrams of the drills covered during the instruction by Beckham as well as a few additional training exercises.

David Beckham is one of the biggest celebrities on the planet, but for the majority of Region 1 audiences, his name doesn't carry that much weight. Consequently, I don't expect too many youngsters will be overly enthralled with him personally, and much of the material here will not be of great value. The basic skills being taught are all necessary ones to learn, and while the instruction isn't as detailed as I would have liked, it can certainly be an effective teaching tool if used in conjunction with the "Coaching Plan". Although adults will find the presentation style to be pretty annoying, I would not be surprised to hear that it works well for keeping their kids focused through the entire thing. If you are a parent looking for some additional help with your young footballer in training, I suggest you Rent this and see if it fits your needs.