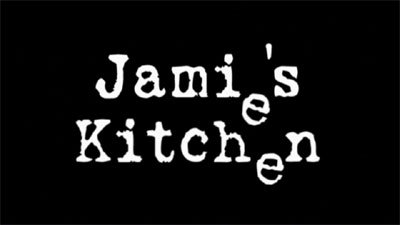 The Show
Jamie Oliver, known as The Naked Chef to fans of his many cooking series, is young, energetic and impulsive. The subjects of this series, 15 unemployed English people, are young, energetic and impulsive. Put them together, and you have "Jamie's Kitchen," which puts those 15 potential chefs under the tutelage of Oliver, as they try to start a not-for-profit training restaurant.

Though a reality show, the elimination aspect is handled almost entirely in the first episode, as the wannabe chefs are whittled down from thousands of applicants to 60 potential participants, then to 30 semifinalists and finally 15 trainees. The elimination process is pretty intense, and gives a good introduction to the "cast," though only a few are featured. As the series progresses, they will get more of a spotlight, which will expose these kids as flawed people. This is probably the first time anyone has had expectations of these people, and some show they can't live up to them. 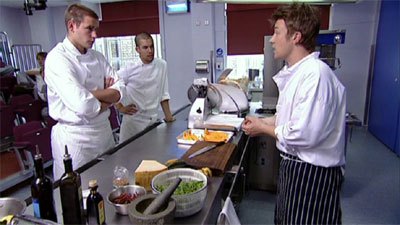 With the elimination out of the way, the education of these down-on-their-luck young people takes center stage, and it's this education that's more fascinating than just about any reality series on TV today. These "contestants" have nothing going on in their lives, and this restaurant is the real deal, not a fabricated environment. They are really working, really cooking and really living their lives. Unlike your usual "reality" show, the producers didn't need to manipulate the series to make it interesting. Real life has created true pressure for the trainees and Oliver, who invested his own money in this charitable cause.

Unlike shows like "The Apprentice," where the superstar looking to hire a protégé does it from a distance, this series shows the stress the competition places on Oliver, as his life is extremely hectic, without the hands-on participation he has in this series. A team of knuckle-crackers joins Oliver on the frontlines, but with a wife soon to give birth, a media "empire" to maintain and a restaurant to be built, he doesn't need the hassle of trying to build a staff out of nothing. Plus, the people he works with to build his restaurant prove themselves to be less than reliable, which costs him more grief and more money.

In the end, no matter what The Naked Chef does, how much he spends and how much he worries, it will be his students who decide how successful Fifteen, the restaurant named for the amount of students, will be. Anyone who knows the history of his first restaurant won't be surprised by the series' outcome, but the journey is all of the fun here. If you expect a Stand and Deliver tale of inspiration out of these kids, you don't know how real this show is.

The construction of this series doesn't follow the whip-fast pace of American reality shows, instead opting for the editing style of a documentary, complete with a narrator. Because of this, there's less artificial "reality" and more real character development. Sticking with a crew of kids as they learn how to julienne vegetables will tell you a lot about them, more than what you would get from a few seconds of an immunity challenge or a "confessional" sound bite.

Those who expect the same old Jamie Oliver will be a bit surprised by this series, as outside of his apartment, The Naked Chef is rough-hewed in the kitchen, flinging obscenities often. The kitchen of a professional restaurant is no place for nice guys, and Oliver shows this, berating his staff with the aggression of a drill sergeant. If he didn't, one wonders what the results would be and if that could make an even more entertaining show. But then, that wouldn't be real. 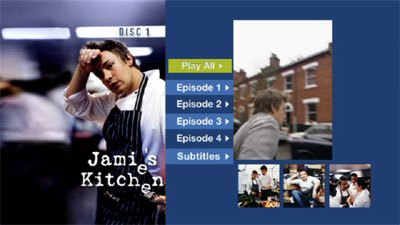 The DVDs
Packaged in a standard-width keepcase with disc wells on both sides, the two DVDs contain all five 50-minute episodes of the series, along with a pair of follow-up episodes that show what happened next. The anamorphic widescreen menus are animated with footage from the show, and include play-all options and individual episode listings. The only option on each disc is subtitles, which are English and can be turned on and off. There's no closed captioning, chapter stops or audio track options.

The Quality
The video quality on this series varies, from the clearest, most gorgeous video on the set-up shots of Jamie, to slightly grainier documentary footage in the kitchen. But overall, the anamorphic widescreen video looks very nice, much better than any of his series has looked on Food Network, especially since you can't see it in this format on American TV. Against those series, the quality of the video on these DVDs is stellar.

In terms of audio, the quality is less impressive, but there's nothing to complain about. DTS 5.1 would be a bit over-the-top for a cooking reality show, so the Dolby 2.0 soundtrack is just fine. This show's content is very real, which means when a group of people is together, they talk over each other, or in the rain, drops make noise, and this track does a good job of keeping it clean. Even at that, use of the subtitles is suggested to cope with the variety of accents and the foreign lingo.

The Extras
There are no extras included on this set. Some text recipes or a commentary from Oliver would have been nice. 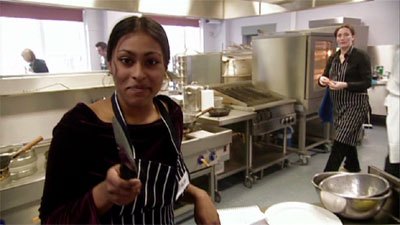 The Bottom Line
This series will be of interest to anyone who finds themselves hooked on the Food Network's celebrity chef lineup or cooking shows in general, but they're not likely to come away with new recipes. That's not to say they wouldn't end up with some interesting new ideas about cooking. Reality show fans might find themselves a bit bored by the pacing, but that's simply because it's more real than "reality." The DVDs look fantastic and sound very good, but they are distinctly bland, providing nothing but the episodes themselves. The price isn't ridiculous for almost six hours of entertainment, but one's mileage will vary when it comes to owning this set, based on their interest in the subject matter.