Riding along with the worst cops in Reno...again

A parody of the true-life series "Cops," "Reno 911!" is one of the biggest critical hits to emerge from Comedy Central in recent years. Starring several former members of legendary cult sketch series "The State," the series follows the employees of the Reno, Nevada sheriff's department as they try (mostly unsuccessfully) to uphold the law. Hot-pants wearing Lt. Jim Dangle (Thomas Lennon) leads this dysfunction group in creating a police show that's a riot. Each episode features several "busts," in addition to the main story, so there are plenty of chances for laughs and the comedy is of the absurd nature and rapid-fire, playing off the kinds of elements that are seen often on "Cops."

There's something about Comedy Central series that works against them, and it's their ability to come out of the blocks on fire, setting the bar very high after the first season. Too often, they can't come back and top it and the show suffers. Not so for "Reno 911!" The second season came back stronger, with more biting comedy and more of the running jokes that made the first season so funny.

There's no on-going plot to speak of, and character development is essentially nil, so all this show has going for it is the strength of the "sketches," which normally take the form of police busts, and the main storyline of each episode. This season, some truly inspired plots were used, including one where the monumentally naive Deputy Trudy Weigel (Kerri Kenney-Silver) may be dating a serial killer. It was so enjoyble that the usual police calls were almost in the way. Other storylines that stood out include a televangelist who wants to shoot his show from a jail cell, a dying cancer kid played by Michael Ian Black, a rivalry between the cops and firefighters and the three-part season finale in which the department is investigated by a power-hungry district attorney. 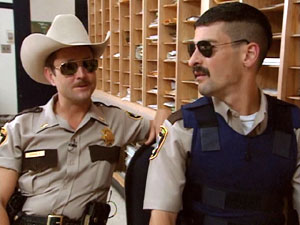 There's nothing sacred in Reno, which is one of the best aspects of the show. Everyone gets made fun of equally and the show pulls no punches, as best seen in the episode about Deputy Raineesha Williams (Niecy Nash) converting to Islam. The jokes made about Muslims would hardly be considered PC, but they are hilarious, especially one run comparing religion to cell-phone plans. Racism is rampant in this department, but it's always played for laughs, especially when the Ku Klux Klan is involved. It's rare when a show takes on Islam in such a bold way, but this show does it well.

While the storylines are great, the sketches are where some of the biggest laughs lie. Some of the better perps from Season One return, including crazy T.T., the runaway maniac, and Andy, the psycho who believes he's above the law. There's plenty of new criminals to bust and some terrific additions like "Laying Down the Law," the PSAs starring Raineesha, which have all the polish of a local Public-Access show. Not having the old "calling in tags" bits is disappointing, but there's enough funny in the new material to make up for it.

Though the show is based in the world of police work, reality stops there. After that, the insanity of these characters is at a level rarely seen outside of an asylum. The best sketches focus on how bad these cops are at their jobs, as they screw up case after case. Whether it's shooting a dog by accident or beating down a man in a milkshake costume, if there's a wrong way to do something, Dangle's crew will find it.

Done in an improvisational style, the show has a real energy to it, and the performers are truly talented. Sometimes, even if the material doesn't seem like it's at its strongest level, the performances just make it work. Cedric Yarbrough, as Jonesy, and Wendi McLendon-Covey, as Clemmy, are underrated performers, and their skill as physical comedians serves this show well. Sometimes, it's hard to say whether the laughs come from the characters or the performances. Either way, it's great. 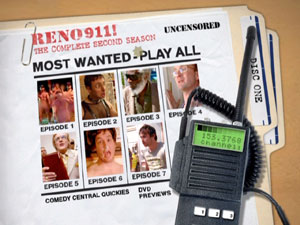 After putting 14 episodes on two discs last time out, the 16 second-season episodes get to stretch their legs on three DVDs, and the digipack packaging has been ditched for three ThinPak cases in a slipcover. The ThinPaks are designed to look like file folders, with episode descriptions on the inside. Discs One and Two have seven episodes each, while the third has two episodes and the bulk of the extras.

The discs start with some "Reno"-themed animation, before settling on a slightly animated full-frame episode selection menu, with options to play all the episodes, view Comedy Central Quickies and check out DVD previews. There are no language options or subtitles, though the episodes have closed captioning.

These episodes are presented "uncensored," a status that is explained on the back of the case. Language goes unbleeped, unlike TV, but the blurs remain intact, as the nudity is normally not real and faces are blurred to keep the joke going when the actors play multiple parts.

The full-frame video on these DVDs is very clean, better than it looks on TV. As it's a "Cops" parody, the quality of the image can vary tremendously, but it's all presented well on this DVD. Colors are bright and solid, without any shimmering or bleeding, though neon in the background can hum, while the level of fine detail is decent for a cable TV show. Despite the frequent night scenes, the video quality is impressive, without much in the way of grain. There's not a spot of damage or dirt in the transfer.

The audio, done in Dolby Digital Stereo, is standard TV stereo, with a defined mix of background sound and dialogue. There's no trouble hearing the soundtrack, which is important, as the mix features mostly natural sound. It's simple but effective.

The only extras on the first disc are the same Comedy Central Quickies seen on the network's recent DVDs, and some DVD previews. Disc Two has more content, with audio commentaries on episodes 10 (Cedric Yarbrough & Niecy Nash), 11 (Wendy McClendon-Covey & Carlos Alazraqui) and 14 (Thomas Lennon & Robert Ben Garrant), while Disc Three features another commentary on the season finale, with Kerry Kenney-Silver and director Michael Patrick Jann. The pairing were nicely chosen, as Yarbrough and Nash are the focus for most of their episode, and the McClendon-Covey and Alazraqui episode features their characters hooking up. As talented improv comics, they are good on their feet, as they respond to what's happening on-screen and share behind-the-scenes info.

This DVD also has almost 90 minutes of alternate takes and deleted scenes, tripling the amount from the first season DVDs. These can be viewed using a play-all option, or individually. The scenes come from across the season, and are usually rather funny, though the extended takes can be a bit slow if you saw the original take, as only a small amount of the material is different.

In addition to the show material on this disc is the cast's 42-minute live performance at HBO's 2004 Comedy Arts Festival, which is split into two parts. The performance takes the form of a Reno Sheriff's Department "Drug Arrest Prevention Seminar." This stage show is pretty damn funny, and all over the place as far as the ideas go, putting it right in line with the series' twisted sense of humor. A unique spin on the standard Q&A session puts the perfect capper on the show.

There is at least one easter egg on the second disc and two on the third disc, two of which are hidden versions of one of the better extras from last season's collection. Check out DVDTalk's Easter Egg section for details. 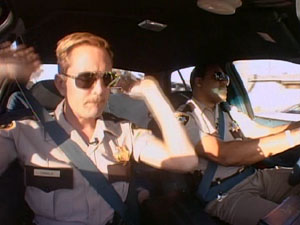 It wasn't an easy task, but the second season of "Reno 911!" actually topped the fantastic first season by taking the show much further in terms of the nonsensical comedy and the characters, while still calling back to the running jokes that worked great the first time. The episode where Raineesha discovers Islam, alone, might be better than anything in the first season. The DVD presents the episodes in optimal quality, with a nice group of extras and some easter eggs, making for a bigger, better box set. There's something special about this show that allows it to appeal to fans of both highbrow and lowbrow comedy, which makes this set easy to recommend to anyone.