Tales from the Crypt - The Complete First Season 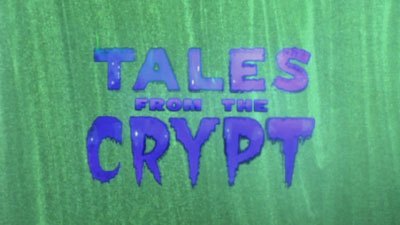 The Story So Far...
Tales from the Crypt was one of the most famous comic books ever, and not just for the high-quality tales of horror and incredibly detailed artwork. The controversy over the effect these stories have on children obscured just what the comic book did, and that's effectively combine horror and comedy, almost single-handedly popularizing the "twist ending." Decades later, a talented group of producers, including Richard Donner, Joel Silver and Robert Zemeckis, took those stories and created one of HBO's milestone series, the 93-episode run of "Tales from the Crypt."

Previously, the only way to see the tales on DVD (besides the feature films that followed the series) was by checking out the three-episode Robert Zemeckis collection that was released in September of 1999.

The Show
I wouldn't consider myself a fan of horror films, though I've enjoyed more than a few such movies in my lifetime. What I am a fan of is good stories, which is why from 1989 until 1996, I was a devoted fan of "Tales from the Crypt." Being a teenaged boy, the occasional nudity helped keep my interest, but it was the outstanding writing that had me coming back for more.

The first season of the series had the unenviable task of setting up the series premise and delivering the kinds of stories that would inject some juice into HBO. To do so, the producers put together a directing line-up that include some of the best working in genre films. Donner and Zemeckis joined with Walter Hill (The Warriors, Howard Deutch (Pretty in Pink, Tom Holland (Child's Play) and Mary Lambert (Pet Cemetery) to put together a short-stack of episodes that got the ball rolling and the crowd's buzzing.

Each episode is hosted by an anamatronic Cryptkeeper, voiced with punny gusto by John Kassir. After Kassir sets the episode's theme in motion, he retreats to the shadows until the episode is over and he provides what is essentially the episode's morale. Since the show combines a sense of horror with a sense of humor, the goofy Cryptkeeper is an excellent guide to the dark side of life. He may seem a bit cheesy and cornball, but that's part of the fun that comes right from the comics.

The Cryptkeeper's dark side covers a tremendous number of life experiences, with episode plots with foci ranging from circus stars to deranged Santas to jilted lovers. Traditionally, the subjects suffer from one or more of the Deadly Sins (normally greed), end up profiting in some what, and then suffer an ironic twist resulting normally in death or eternal punishment. It was a formula that works exceptionally well, and one that made the show more than a reason for gore. Of course, when the show wanted to be gory ("Lover Come Hack to Me" jumps to mind), they knew how to do that too. 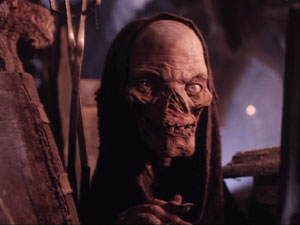 The best of the six episodes might be Donner's contribution, "Dig that Cat...He's Real Gone." In it, Ulric (The Matrix's Joe Pataliano) is given the gift of a cat's nine lives. Technically, I should say he was, as the episode is told in flashback from Ulric's coffin, where he is performing his latest trick, being buried alive, dying and being resurrected. As if one couldn't guess, things don't exactly go right, and Ulrich's memories take a darker turn.

While "Dig that Cat" and most of the other episodes invoke some twist to turn the story on its head before the climax, "And All Through the House" makes that twist the plot of the show, as Mary Ellen Trainor finds herself trapped in her house and hunted by a psychotic Santa thanks to her previous actions. It's also the episode that goes for the most visceral and artificial subject matter, eschewing psychology and allegory for pure violence, and making out well on the exchange.

Just as the episodes featured great talent behind the camera, in front there were quite a few stars. Lea Thompson is memorable as a prostitute who think she's figured life out and how wants to fix it, while Larry Drake (Darkman) is terrifying as the grinch who murdered on Christmas. Robert Wuhl, M. Emmet Walsh and Amanda Plummer are a few of the other recognized names to appear in this season, a job that would become quite in demand in later seasons.

The DVDs
The first season of "Tales from the Crypt" arrives on a two-disc set, held in a three-panel digipack with an embossed slipcase. The six episodes are on the first DVD, along with a new introduction, while the special features are found on Disc Two. The first disc features animated anamorphic widescreen menus, with options to play all the episodes, select episodes from a text list, view a special feature or adjust the languages. There's an introduction option listed as well, but it's just a repeat of the special feature. The disc has no audio options, but subtitles are available in English, French and Spanish, and closed captioning is available also. 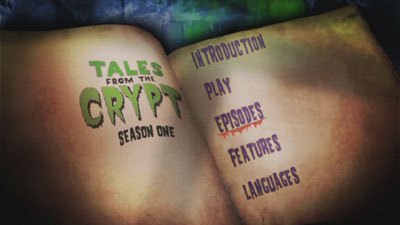 In an interesting touch, the series' opening titles, complete with the memorable theme music by Danny Elfman, is used as the opening animation of the DVD, which you can skip using an appropriate "Kill Intro" on-screen option. This is the only time on this DVD you'll see the titles, as the episodes dive in without them. Also interesting is the fact that these titles are in anamorphic widescreen. I don't know if they've ever been seen in this aspect ratio before, considering the show certainly aired in 4:3 format in 1989.

The Quality
Dark cable-TV footage from the late '80s is not likely to look all that great, and this disc's full-frame video is no exception. Though there are some differences (for example, the second episode looks much better than the fourth), there are some general truths at work. There's noticeable noise and grain in most every episode, along with obvious dirt and damage in the transfer. The fifth episode especially is quite dirty. The level of detail in these episodes is can vary from crisp to blurred, but there's a decent definition to the majority of the scenes. Overall, the color is dull but accurate.

The audio, presented in Dolby Surround 2.0, is pretty good, with some sound effect separation and a nice amount of power in the music soundtrack. Considering its age, the level of clarity and quality in these tracks is quite surprising and highly welcome.

The Extras
When I see a two-disc set that has at its core six 30-minute episodes, I think, I'm getting a nice spread of bonus material, because there's a hell of a lot of disc space available to fill. Unfortunately, in the case of this set, that logic doesn't follow through. The first disc has one extra, a brand-new letterboxed introduction by the Cryptkeeper. The sense of humor is still the same, but the voice seems slightly different after all these years. Either way, it's short and similar in tone to the rest of his appearances.

Now, if I had produced this DVD set, I think I would have split the episodes to put three on each disc, leaving plenty of room for commentaries from the incredible talents involved in this series. There had to be at least one writer, director or actor from each episode available to talk about this show. But instead, the extras are saved for the second disc. But with all that room, the extras provided seem very slim.

A short (5:30) featurette provides an overview of how the series came together and a bit about each episode. Hosted by the Cryptkeeper, this is "his" version of the story, and thus, he was the motivating factor for everything. Again, this is done purely in his punny style, and thus should appeal to fans of his. Oddly, the description of the episodes in terms of their order differs from the order on this DVD and the generally accepted order.

The other extra is the excellent 50-minute documentary "Tales from the Crypt: From Comic Books to Television." Released as a standalone DVD (with a second disc of extras) in October of 2004, this history of EC, the publisher of Tales from the Crypt, is engaging, informative and definitely entertaining, thanks to a nice mix of talking heads and animated recreations of the publisher's comics. If you enjoy the series, the story behind it is potentially even more fascinating, if only because it really happened. As the documentary leads into the creation of the HBO series, it is the perfect in-context extra for this set. (For more info on the documentary, check out Bill Gibron's excellent review of the earlier release.) 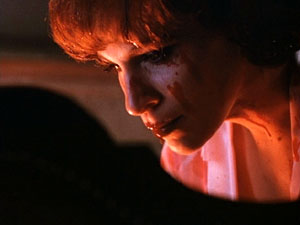 The Bottom Line
Starting with fantastic source material like the EC horror comics set this series for greatness, while the talent involved helped the show fulfill that promise, as seen in this short six-episode season. Just having this series released will satisfy plenty of boys and ghouls out in DVD land, but outside of the episodes, the set is hardly what one would expect for such a beloved series, with just a scant few extras to enjoy. At least the price is right for those who just want to enjoy these episodes.