Tango // Unrated // June 14, 2005
List Price: $39.98 [Buy now and save at Amazon]
Review by Francis Rizzo III | posted July 7, 2005 | E-mail the Author
In 10 Words or Less
Six disparate stories, one shiny pistol The Show
Anthology television shows have a bad success rate with the general audience, but a tremendous amount of popularity with critics and more informed viewers. The opportunity to tell a variety of stories with a variety of characters in the course of a single series is an intoxicating idea, one that has paid off with classics like "The Twilight Zone" and "Tales from the Crypt." Outside of the sci-fi/fantasy genre though, anthologies have had a rough go of it.

"Gun" was no exception to the rule. Only six episodes were made, despite an incredibly packed cast list and a talented creative staff led by "Tales from the Darkside" alumnus and "Gun" creator James Sadwith, executive producer Robert Altman and directors Jeremiah Chechik (Benny & Joon), Ted Demme (Blow) and James Foley (Glengarry Glen Ross.) Part of the problem is the distinct difference between the six episodes, which didn't share anything in terms of tone, feel, look or even genre. The only thing they shared was a pearl-handled .45 pistol that passed into the lives of those in each episode.

Unfortunately, the gun doesn't play a big enough role in the show to be a reason for tuning in each time. If a show is built around an item and the people it connects with, there should be some sort of mythology behind that item, and an explanation of how it transfers ownership. Instead, these guns live in what must be alternate universes, as it is registered to an owner in one episode, free of a serial number in another and lost at the bottom of a lake in another. If it was more obvious that the gun was the same one, episode to episode, there would be a reason to follow it, through tone change and genre change.

On the other hand, if you enjoy well-written and creatively produced short films, you will have every reason to sit through all six episodes, followed by the lament that there's no more to watch. If you're looking to rent just one disc, the first or second DVD are the best bets, with "Columbus Day" and "The Shot" being two of the best episodes. "The Shot" may be the best of the bunch, combining a twist ending with some smart parody to create an example of what this series could do if given the chance.

Columbus Day
written by James Sadwith, directed by James Sadwith
James Gandolfini is a proud Italian man (a shocker for sure), who only wants the best for his wife (Rosanna Arquette) and daughter. As a result, he works long hours, leaving his wife home alone. Worried about his safety, he buys her the gun. He should have invested in a chastity belt instead, as a neighbor (Peter Horton) fans her flames while her husband is away. A terrorist subplot connected to Gandolfini's job as an airport security guard increases the drama, but it doesn't really pay off in the end. 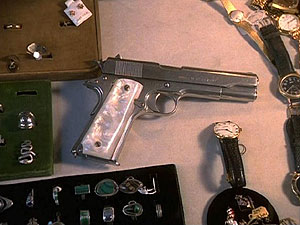 All the President's Women
written by Anne Rapp, directed by Robert Altman
Altman took the helm for this comedic episode about a country-club president (Randy Quaid) who can't keep it in his pants. When things get out of control for him, he learns how deadly the female of the species can be. Darryl Hannah, Sean Young, Jennifer Tilly and Sally Kellerman all guest, with Hannah delivering a strong performance as Quaid's wife and Tilly going full-tilt in a nearly-manic role. The pistol is something of a minor player in this one. Overall, it's a decent episode with a different feel from the rest.

The Hole
written by James Sadwith, directed by Ted Demme
At the bottom of a pond, a shiny secret lies out of reach of Sandra (Kirsten Dunst), who hopes it's the treasure she needs to escape her hellish white-trash life. Instead, she meets a former local who has served time for murder, and who also has an interest in what lies at the bottom of the pond, as well as in Sandra. Carrie Fisher's presence is wasted as Dunst's mom, and Donal Logue doesn't do much better as a shop-keep. The ending is a tad confusing, but it's a decent story either way.

The Shot
written by James Steven Sadwith, directed by James Foley
A failing actor named Harvey (Daniel Stern) becomes a national star when he foils a convenience store robbery. When his life begins to change due to the attention he's receiving, he has to make some tough decisions, but things may already be out of his hands. Kathy Ireland, Ed Begley, Jr. and Clint Howard are among the stars making an appearance in this comedic episode.

Ricochet
written by Clyde Hayes, directed by Peter Horton
A cop about to retire (Martin Sheen) is working a last case, involving a Japanese man who was shot by the gun, his wife (Nancy Travis), who is none too broken up about her loss, and a lawyer (Christopher McDonald) with a plot to win the California Lottery. This might be the weakest of the series, thanks to a plot that's rather standard in terms of crime stories. Sheen is interesting as an old man trying to go out on top, but Travis is way over the top. Bud Cort and Wil Wheaton guest star.

Father John: An Article of Faith
written by Joe Cacaci, directed by Jeremiah Chechik When John Farragut's (Fred Ward, Remo Williams: The Adventure Begins) priest uncle dies, he finds a box with $50,000, a few names and a pistol, among the posessions he left behind. When he tries to investigate what they reveal about his uncle, he stumbles into more than he bargained for. Noirish in tone, the episode loses the gun for most of the 40 minutes, as the pistol serves more as a kick-off point for the story. Edward James Olmos and Maria Conchita Alonso are the big-name guest stars. 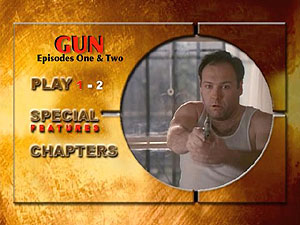 The DVDs
The six episodes of "Gun" are evenly split over three DVDs, which come packaged in a four-panel, three-tray digipak, with an 8-page booklet. The discs open with a bit of animation from the series' opening titles, before settling down on the animated full-frame main menu, which has footage from the episodes on that disc. Only the first disc has a special features option, while all three DVDs have episode selections and chapter selections inside of episodes. There's just one audio track, no subtitles and no closed captioning, while the chapter selections have small still previews and titles for each scene.

One of the more impressive aspects of this collection is the fact that the series' theme, U2's performance of The Beatles' "Happiness is a Warm Gun," remains in place. Considering how often music has to be replaced on DVDs because of rights issues, the fact that such a high-profile song is used on a relatively low-profile release is something the discs producers should be lauded for.

Also interesting is the order of the episodes, which differs from the order the episodes were originally shown in. Originally, the episode order was:
• "The Shot"
• "Ricochet"
• "Columbus Day"
• "All the President's Women"
• "The Hole"
• "Father John"

Why the order changed is unclear, but it's obviously different, as "The Shot," now episode four, is the only episode with the original typewriter-style titles.

The Quality
The video quality of these full-frame episodes is excellent, with a decent level of detail and an impressive range of color, including very deep blacks. The image can be a bit soft at times, but at almost eight years old, this series looks as good as some current series There's also not a bit of dirt or damage in these transfers.

The Dolby Digital 2.0 mix is quite nice, with a deep mix including wonderful backgrounds that are almost as good as surround sound mixes. Dialogue and music exist peacefully with each other in the mix, delivering a surprisingly good audio presentation. The way this sound is put together is better than some 5.1 tracks.

The Extras
Disc One holds the main bonus feature for this set: a slick trailer for the DVD collection, set to the U2 theme song. Beware, because much of the series' plot is given away in this clip-fest. There's also a wide assortment of trailers, 24 in all, for Tango DVDs, including the O.J. Simpson comedy series "1st & Ten."

Also found on Disc One is a slideshow photo gallery, which presents almost three minutes of full-frame still photos (at a rate of about one every three seconds.) The lack of control is annoying, but I can't imagine this feature getting a lot of use anyway. 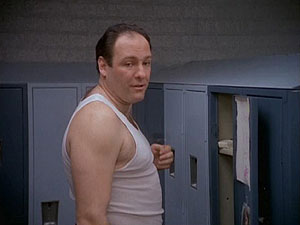 The Bottom Line
Though there's nothing much that ties together the six episodes of "Gun," besides the presence of the titular weapon, there's a common thread throughout the series, and that's quality craftsmanship. A raft-load of talent filled the show's cast with acting power, while the stories and direction went beyond the TV norm in terms of their originality and creativity. The only real downside was that lack of a connection between the episodes. Each was so different that without a thread that tied them together, building a consistent audience was nearly impossible. This DVD presents the episodes with a high level of quality, but a severe lack of extras. Depending on your tastes and flexibility in terms of interests, you may find only one or two episodes to your liking, so a rental is suggested first before diving in on a purchase.