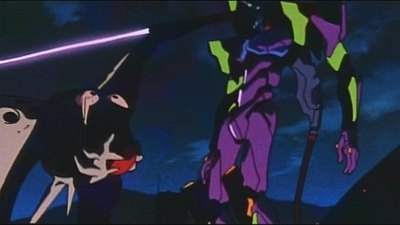 Neon Genesis Evangelion is without a doubt one of the quintessential anime titles that are a must have classic for any Otaku. Since it came out in the mid 90s it has grown in popularity and is considered by many to be one of the top shows made to date. Having run the standard season of 26 episodes, the show featured monsters, giant bio-mecha, cool battles and some of the best character development out there. What more could a boy need? Well, aside from a little more Rei in your life that is.

The popularity and creativity of the series can be seen as a reference point in many of today's current shows. Whether its character designs, concepts or overall atmosphere; there are a few recent anime that pay homage to Evangelion. One of the only faults (if you can call it that) of the show was that it ended on a rather confusing note that has sparked a lot of debate among fans.

The simple fact is that with the way the show ends you will either get it or you won't. After numerous letters (and reported death threats) to the show's creator Hideaki Anno, a pair of animated films were released to help clarify things and end the show on a different note. As with any piece of artistic work it's up to an individual's impressions whether they'll enjoy something or not and it goes without saying that you can't please everybody.

Chances are if you were a fan of the show then you have already seen these either when they first came out or at a later point. Much like the actual series though, the movies have seen a re-release and have just been reissued as a double pack. Whether you want to double dip or not is up to you because this new release is essentially the same as the previous ones.

If you haven't seen the film adaptations, but have the Perfect Collection or complete set of Neon Genesis Evangelion then you should be made aware that Death & Rebirth (the first movie) is simply a recap of the show. You should be able to cut straight to The End of Evangelion (second movie) and bypass the first all together, so in that regard a two pack is kind of pointless. 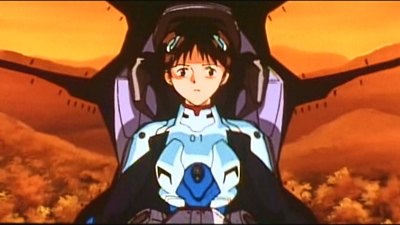 The first Evangelionm is broken up into two sections. The first, Death, is the recap of the show that I was talking about and is just over an hour of clips and flashes from the series. When you condense that much show into such a short time frame it's only natural that you're going to lose a lot of the point. Think of it as Neon Genesis for kids with ADD and you pretty much hit the nail on the head.

Death is really meant as a refresher for watchers who saw the entire series and needed to be reminded about some things. In no way is this a substitute for the show so if you have no idea about Evangelion going in, you'll be lost in no time. That being said a lot of the clips are battles with equal parts character development and plotlines that made the show as good as it was. In many circumstances there are voiceovers of dialogue to fill in the blanks but it's all snippets from the show so there's nothing really in the way of new content here.

The second part of the first movie is where the Rebirth comes in and is essentially the first half hour of The End of Evangelion (confused yet?). This is another example of the reason you can skip this disc all together and just pick up the second movie release if you already have the series. Death & Rebirth is good, but when compared to the series and The End of Evangelion there's really no point.

The End of Evangelion: 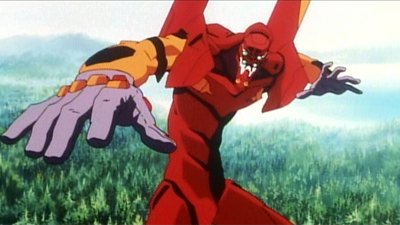 Designed to supplement episodes 25 and 26 of the original series, The End of Evangelion is an extra attempt to make a good ending for the show. The first episode (25) has a lot of fighting and bloodshed as the NERV base is stormed by SEELE in search of the Magi at the Tokyo-3 HQ. Rei, Asuka and Shinji are basically useless, but eventually Asuka snaps out of it and leaps into action.

Nine Eva units from across the world come together to battle Asuka and Eva Unit-2 to bring about the Third Impact. With a slew of religious undertones and references, The End of Evangelion may go over your head at times, but not nearly to the extent that the original ending did. The later part of the "movie" (episode 26) is a focus on Shinji and what happens to the world. It's still pretty screwed up with a lot of confusing imagery but it conveys a brilliant message

Quite simply if you watched the complete series and had questions left regarding the ending, The End of Evangelion will answer several of them for you. I don't want to give anything away considering this is supposed to be the end of a series, but I will say that while it's better than the original ending, this one is still fairly messed up. This release should only be considered by fans that have already seen the entire original show and crave an alternate ending. If you have never seen Evangelion before you will have no clue what's going on and shouldn't bother.

Both Death & Rebirth and The End of Evangelion are presented in 1.85:1 non-anamorphic widescreen, instead it's a simple letterbox showing. Considering that this is mostly a clip show from the series there is quite a bit of grain and aliasing found in the image. The video is transferred faithfully from the series though and is comparable to the DVD releases.

The End of Evangelion is definitely a step up in terms of image quality considering the later production date and higher budget. The animation has been supped up considerably and everything is much sharper and cleaner looking. There are a few moments where there is some grain and pixilation, but overall the video is much better looking in this portion than Death & Rebirth.

For the audio quality both releases again vary because of source material and production budget. Death & Rebirth offers up Japanese 2.0 stereo and English 2.0 and Dolby Digital 5.1. I typically prefer original language and subtitles with my anime, but found the 5.1 English mix to be acceptable. There is a decent amount of directionality and the dubbing for the characters never really bothered me all that much (even though some of my buddies complain about it).

The End of Evangelion offers up a lot more options with DTS 6.1, Dolby Digital 5.1 and 2.0 stereo mixes for both English and Japanese. The sound is great with a lot of the action, voices and sound effects coming at you from all directions. Towards the end of the disc when things are quieter with more conversation and music things tend to be more subdued though.

To access the special features for Death & Rebirth you've got to flip the disc over. Once you do that you'll be treated to some trailers and previews, photo gallery and background information on the show and characters. Along with a commentary track for the release there is also a selection called Mokuji in which information becomes available for you while you're watching the movie. These are the same standard extras that were in the original DVD release for Death & Rebirth back in 2002.

The End of Evangelion is also basically a rehash of the material on the original DVD release. This movie has the continuing commentary from Death & Rebirth as well as some previews for other Manga products. The commentaries here are pretty good and are the most entertaining feature on this release, but it's nothing new compared to prior versions for these films. The only thing that you'll get out of the two-pack here that you won't get out of the regular releases is a small mouse pad and post card inside of the package. 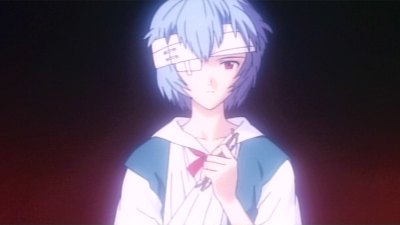 If you are a fan of Neon Genesis Evangelion then chances are that you already have Death & Rebirth and The End of Evangelion. If that's the case then there is really no point to picking up this boxed set considering there is essentially nothing new added as far as I can tell. As an alternate ending this piece does its job well and wraps things up a little cleaner than the original episodes 25 and 26 did, but if you haven't seen the show before there's no point in bothering until you do.

I'm going to recommend it for fans of the series that don't already own the movies, but suggest a skip for folks that haven't seen the show or already own the previous releases.