I was very lucky to be born in the early 70s, and here's why: I grew up with two busy parents and a big sister who wanted very little to do with her movie-addicted and perpetually annoying little brother. Which means that when my afternoons weren't filled with softball games, action figures, and trips to the mall with the neighborhood families -- I was being babysat by some of the most wonderful folks imaginable.

If I were actually able to sit down and calculate how many times I've seen Animal House, Caddyshack, The Jerk, Meatballs, 1941, Airplane!, Trading Places, Stripes, Ghostbusters, and of course The Blues Brothers -- let's just say I'd end up pretty embarrassed by the final tally. Rainy Sunday? Time for another visit with Seems Like Old Times. Bored friends stopped by with nothing to do? That sounds like a job for Vacation or Fletch. Nothing good on TV? I had a well-worn tape that boasted the can't-miss triple feature of Three Amigos, Spies Like Us, and Foul Play.

Belushi, Aykroyd, Martin, Chase, Murray; these guys were like gods to me when I was just a formative little movie geeklet. And every single time The Blues Brothers came on TV (which was fairly often), you'd know where you could find me: plastered in front of the TV, tapping my toes to the wonderful music, chuckling at the oh-so-dry jokes, and widening my eyeballs at the astonishingly cool car chases.

For the longest time, The Blues Brothers ranked at the very top of my Favorite Comedies list. I made everyone watch it. Mom, Dad, disinterested sis and her eye-rolling pals ... heck, I even had my grandmother watch the thing with me when it hit HBO -- and she loved it.

The very first (and still the very best) movie to be inspired by Saturday Night Live characters, The Blues Brothers is an absolute joy to behold. It's silly and smart; it's chaotic and cracked; it's full of brilliant musical sequences and amazing car chases. Basically it's one of the most "fun" movies I've ever seen. And I've seen it about 25 times.

The story couldn't be more simple: Jake, fresh out of a stint in the pen, and his brother Elwood decide to reunite with their old band in an effort to raise the funds needed to save their old orphanage from foreclosure. 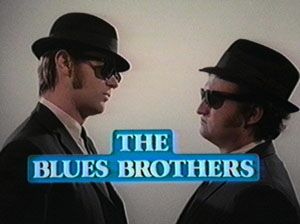 Turns out that Jake & Elwood are, by their very nature, inherent troublemakers and amazingly consistent chaos-magnets. What should be a rather easy task (find the old pals and play a packed gig) turns into a fiasco of truly epic proportions. In their travels, Jake & Elwood manage to infuriate various law enforcement officials, a group of neo-nazi bastards, an unpleasant country western band, and a mysterious woman with a penchant for powerful weaponry.

And all that really matters to these guys is:

3. Get the money to the orphanage.

Everything else is remanded to the rear-view window. The brothers drive a magical car, cheat death numerous times, destroy more public property than Godzilla, and end up hunted by the army, the coast guard, and a SWAT team -- all to save a grumpy old nun and her needy orphans.

Easily of the most ebullient and smoothly enjoyable musical comedies ever made, The Blues Brothers boasts a roster of musical talent that must be heard to be believed: Cab Calloway, Aretha Franklin, Ray Charles, James Brown, and John Lee Hooker, all legends of the music industry, had their careers earn a well-deserved shot in the arm from their appearances in The Blues Brothers. And the musicians hired to play Jake & Elwood's band? Top-notch artists across the board. The flick's basically one-third blues music, one-third character-based comedy, and one-third car chase -- and all of it's grade-A prime American Comedy, brewed in the vintage year of 1980.

Everything in The Blues Brothers is larger than life. The lead characters, who are on a "mission from god," are seemingly immortal ... or at least unstoppable. The stunts, the tunes, the set pieces, the non-stop chaos that is the finale; it's all a part of the "bigger is better" school of comedy, which in many ways makes The Blues Brothers the more highly regarded cousin to Steven Spielberg's equally insane war comedy 1941.

Although the show belongs mainly to Belushi, Aykroyd, and the dazzling array of musical guest stars, The Blues Brothers is also built with a foundation of great little character parts: Kathleen Freeman as a hilariously intimidating nun; Henry Gibson as an "Illinois Nazi" with a score to settle; Carrie Fisher as a murderous mystery woman; Charles Napier as a fuming country crooner; plus keep your eyes peeled for folks like Frank Oz, John Candy, and even Steven Spielberg! Small contributions by these guys, but each one earns a few laughs.

The Blues Brothers was produced with a then-considered-mammoth budget of $27 million, but it also went on to gross over $115 million worldwide -- and that's just the initial theatrical run we're talking about. Since its debut in 1980, the film has become a bona-fide comedy classic of the most beloved kind. Every time I pop the movie in, it feels like I'm slipping into an great old pair of slippers -- and woe is the poor fool who tries to get me on the phone or drag me out of the house before the "Jailhouse Rock" finale pipes through my speakers. 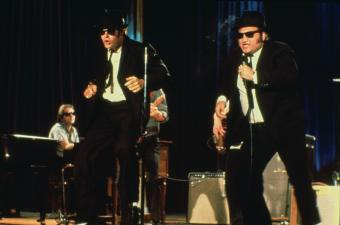 Notes on the "extended" version - Overall, I'm a "theatrical cut" kinda guy when it comes to The Blues Brothers. The original (and now out-of-print) Universal DVD did not offer the theatrical cut of the movie, which left me little choice but to "get to know" the extended cut, which runs about 15 minutes longer than the 133-minute theatrical version.

On the plus side, the long version includes a lengthier cut of the supremely rousing "revelation at the church" sequence. Indeed, nearly all of the classic set pieces (Cab Calloway's "Minnie the Moocher," Aretha Franklin's "Think," and the Blues Brothers farewell concert) are made a little bit longer in the extended version. There's also a cool gas station explosion and a few new chuckles, but...

...the longer version is also packing some dead-end sequences that add virtually nothing to the movie -- aside from extra running time. Elwood's "explanation" on how the Bluesmobile gains it magical powers and several droplets of dialogue have been reinstated -- but they don't really help the movie in any discernible way. (OK, it's cool to see where Elwood originally got the goop he used to sabotage the police car tires ... but is it this bit really necessary?) Perhaps it's simply because the theatrical cut is the version I grew up with, but I'll side (say, 60/40) on the side of the original Blues Brothers.

But that's part of the beauty in this re-release. Fans can finally choose which version they want to enjoy. On side A you'll find the extended cut; flip the disc over and there's the theatrical. (I'd have preferred Universal do this release in a full 2-disc delivery, but that's a minor gripe, all things considered.)

Video: Regardless of which version you choose, you're getting a Widescreen (1.85:1) Anamorphic presentation, and the picture quality is pretty darn solid. You'll obviously notice some grain and minor source flaws (especially in the darker scenes), but overall the movie looks quite grand.

Audio: Now here's a minor annoyance: The extended cut comes with a fantastic Dolby Digital 5.1 audio track -- while the theatrical cut warrants no better than a Dolby Digital 2.0 treatment. Hmph. (Alternate language options - French & Spanish - are offered only on the 2.0 theatrical cut.) Both audio tracks are quite good, but obviously the 5.1 brings the tunes home in truly vibrant fashion. Optional subtitles are available (on both versions) in English, Spanish, and French. 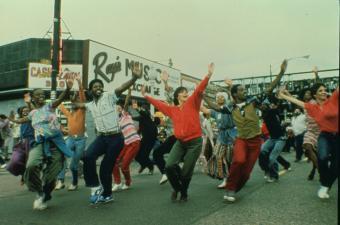 Fans who purchased the first Blues Brothers DVD should be happy to know that the 56-minute (and really excellent) Stories Behind the Making of The Blues Brothers has been carried over to this new release. Full of anecdotes and recollections from Dan Aykroyd, director John Landis, producer Robert Weiss, executive producer Sean Daniel, editor George Folsey, cinematographer Stephen Katz, and perhaps a dozen others (including several of "the band!" members), this is a fantastic retrospective featurette that gives the fans precisely want they want: the scoop on how the flick came to be, how so many great musicians were lined up, how that massive "mall chase" was done, etc. This might not be a new supplement, but it's one that's definitely worthy of a second visit.

As far as new goodies are concerned, you'll get a 22-second Introduction to the Film by Dan Aykroyd, a 7-minute mini-concert called Going Rounds: A Day on the Blues Brothers Tour (which is actually a somewhat embarrassing display by Jim Belushi and Dan Aykroyd), a 15-minute "look back" featurette entitled Transposing the Music (which offers some new interviews with Aykroyd, Landis, Jim Belushi, John Goodman, composer Howard Shore, and John's widow, Judy Belushi-Pisno), and a 9-minute Remembering John tribute, in which several of the aforementioned folks share their favorite "Belushi" moments and memories.

Rounding out the double-sided package are a handful of text-based production notes, the original theatrical trailer, and a rather pointless menu option called Musical Highlights -- as if you couldn't just flick to your favorite tunes by using the normal "scene selection" menu.

Offered on the previous DVD but missing from this one are some rather pointless filmographies and a huge, healthy photo gallery.

The Blues Brothers is loud, chaotic, indulgent, and crazy -- but it's also got a sly attitude and a palpable sense of love and respect for the blues classics. Frequently over-the-top and aggressively raucous, it's one of my very favorite comedies -- and musicals.

Hard to believe that after 25 years, not one movie has been unable to unseat The Blues Brothers as the grade-A #1 SNL-inspired comedy flick -- but then again we're talking about movies like Superstar, It's Pat!, and A Night at the Roxbury ... flicks that don't even deserve to be mentioned in the same breath as The Blues Brothers.