The Story So Far...
Jamie Oliver has had a number of series on TV, and a number of DVDs to go with them. A DVD of his show, "Happy Days Tour Live!" was made available in 2002, followed by the first disc of "Oliver's Twist" (DVDTalk review) from Sony. More recently, 2005 saw the release of "Jamie's Kitchen" on DVD. DVDTalk has reviews of that set by Francis Rizzo and Aaron Beirele

The Show
In the host-driven world of TV cooking, Jamie Oliver has to be one of the most down-to-earth TV chefs around. Instead of putting the focus on his style or personality, his shows tend to be entirely about his friends or the food. After all, he really doesn't have a cooking style, earning his "Naked Chef" moniker by stripping his recipes down to the bare bones. It could be argued that this is a style in itself, but if you're going to make that argument, there's not much you will agree with in life.

There's not all that much that differentiates this series from Oliver's previous efforts, like "The Naked Chef," but fans of the chef aren't looking for anything new. They just want more of his everyday recipes. This series follows something of a formula, as Jamie plans a nice meal for one or more of his friends, then he shows how to cook it, and then enjoys it with them. Depending on who the friend is, from his fishmonger to old mentors to his infant daughter, the menu changes dramatically.

The introductions of his friends and their enjoyment of their meals are diversions for each episode. The real meat is the preparation, as that's where Oliver truly shines. He may be fun to watch riding around on his scooter and picking out fish filets, but behind a kitchen counter he's a genius. Smooth and calm, he moves with a wild precision that doesn't seem at all choreographed, yet is efficient and down to the letter. He is such a natural presenter that one feels like Oliver isn't so much hosting a cooking show, but is instead being watched while cooking. That he helps out the voyeurs by explaining what he's doing, only shows how selfless he is. 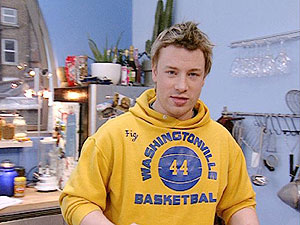 There is a bit of a downside to Oliver's recipes, and that's their origin in British cuisine. The jump across the pond isn't an easy one, making meals like Moroccan Lamb and Apricot Stew and Cheese and Pickled Onion Sandwiches a hard sell in most American dining rooms. Actually following Oliver's advice might be a tact used only by the culinarally adventurous. The rest of us should be content to stand on the sidelines as Oliver scores again with another tasty concoction.

The DVD
"Oliver's Twist" 2 is presented on two DVDs, which are packaged in a double-sided single-width keepcase. The selection of episodes is a bit weird, as it's not a season of the show (according to Food Network) and they aren't in order either, so it's not a volume in a series. Instead, it seems to a sampling of episodes from the second season. After the first DVD included seven of the first 26 episodes, this set picks 15 of the 26 in the second run, eight on the first disc, seven on the second.

Included on this set are:
Disc One
• Veg Out - Jamie tries to bribe the builders next door to finish quickly by cooking them a meal
• And Englishman and an Irishman - Chef Richard Corrigan teaches Jamie about Irish cooking
• Flash in the Pan - A crash course in one-pan cooking
• A Very British BBQ - Jamie throws a BBQ that's affected by British weather
• Pasta and the Masta - An old teacher helps Jamie learn about Italian cooking
• World on a Plate - Jamie tries out Fusion cuisine
• Carnival Brazil - Inspired by one of his staff, Jamie tries Brazilian food
• Jamie and The King - Jamie cooks for an Elvis impersonator 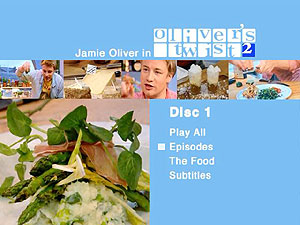 Disc Two
• Birthday Boy - For his birthday, Jamie puts together a BBQ in his dad's kitchen
• The Boat Trip - A picnic fit for a boat is the order of the day
• George's Day Off Jamie whips up a meal for his hard-working fishmonger
• Daddy's Girl - Left to care for his daughter, Jamie makes his girl a proper meal
• Jekka the Herb Lady - Jamie cooks up an herbal delight for his horticultural pal
• The Big Cheese - Visiting his friend's cheese shop inspires Jamie to try more cheese recipes
• The Night Shift - Jamie works overnight with his baker


The discs feature animated full-frame main menus, with options to play all the episodes, select individual ones, choose to view only the cooking segments and adjust the subtitles. The episode selection and cooking segment menus consist of text lists, while subtitles are available in English only. There is no closed captioning and no language options.

The Quality
The full-frame episodes look quite good, with bright vivid color and a nice amount of detail, though there's some pixilation visible along hard lines and a bit of wash-out in lighter areas of the screen. For some reason, there's a lot of Moire effect at work, but there's no dirt or damage, and the video looks better than it's looked on Food Network.

The audio, presented in Dolby Digital 2.0, is good, but not aggressive in anyway, as much of the show consists solely of Oliver talking to the camera. At least this dialogue is clear, if not always easily understood thanks to Oliver's accent. Sound effects like chopping and searing are also well recorded. When used, music tracks are bold and strong, especially the theme song, which comes across loud and clear.

The Extras
Though there's a misleading item on the menu titled "The Food," all it is is a way to select only the cooking segments of each episode. Like the "Jamie's Kitchen" DVDs, these discs are barren in terms of extras. 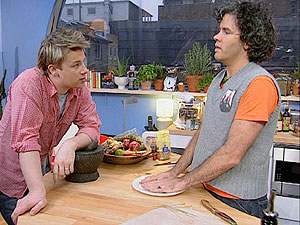 The Bottom Line
Like the rest of his shows, "Oliver's Twist" is an entertaining cooking series, one that's refreshingly devoid of the pompous egos that frequently make interesting topics dreadfully dull. Instead, Oliver makes cooking feel fun and his show presents his lessons in a lively manner. The DVD set has a very nice presentation, though the episode choices are disappointing for completists and the lack of extras is frustrating. But for fans of Oliver, ready access to his shows might be too irresistible to pass up.