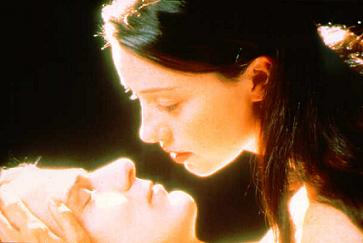 The Film:
Even when she was a little girl Sandra Larson (Molly Parker) was always fascinated by death. The cold little feet of her dead pet bird, the little kitty lying numb in the nearby forest, even the adjacent funeral home always had an unexplainable appeal to her. Now significantly older and working at the very same funeral home Sandra has all the time in the world to quench her fascination with dead bodies. She washes them, combs their hair, sometimes she even holds their hands hoping to understand what flesh becomes once life exits human bodies. Every so often, late at night, Sandra would even go to the brightly lit embalming room, she would strip her clothes, and slowly make love to them, one final time before they are buried deep into the ground.

Directed by Canadian born Lynne Stopkewich, better known for her independent music project Lilith on Top (2001), Kissed delves deep into the world of a lonely woman who shares an unusual fascination about death. In a rather provocative manner reminiscent of David Cronenberg's highly controversial film Crash (1996) where a group of people is fascinated and aroused by half-destroyed cars and the mutilated bodies of those who drive them, Kissed goes a step further reaching deep into a territory that many might feel uncomfortable with-the taboo subject of necrophilia. Now, wait a second...Before you unjustifiably dismiss this film with an ignorant aplomb claiming that it is just another exploitation flick that should have not been completed in the first place I challenge you to consider something else: what do you really know about people that are fascinated with the subject of death, or have you ever known anyone that has expressed fascination with dead bodies so that you could have a credible enough argument against them? I am not attempting to force you to embrace such behavior but help you see this film from a point of view which the director, I assume, wanted to explore.

I think that it is easier to dismiss Kissed than to try and defend it in a logical way. There is too much in it that one as a reviewer can unfortunately slip on and spur all sorts of uncalled comments. But I won't shy away from the fact that Lynne Stopkewich has boldly recreated the lonely world of a woman that by all known to me standards does not fit into what we perceive as normal behavior. Yet people like her, and those that David Cronenberg has depicted in Crash, certainly exist. So perhaps the more intelligent approach towards such individuals would be to attempt and understand what fuels their obsessions as opposed to hastily sweep them under the rug of morality.

One of the greatest assets of Kissed is the delicate manner in which the film's controversial subject is introduced to us. We follow Sandra from her childhood years all through her transformation into a practicing embalmer and I don't think that the director could have approached the subject any better. Not even for a moment did I sense a touch of vulgarity in Sandra's behavior. On the contrary I wanted to understand why someone as beautiful and as intelligent as she obviously was would avoid the attention of those around her in favor of a world where affection is not being mutually exchanged. Or, perhaps it is and I, just as many of you out there, failed to detect it.

Many years ago during the time of the great Pharaohs the wives, loved ones, and even servants of the powerful rulers were sacrificed after the death of their masters so that they could extend their relationship in the afterlife. Such a ritual was considered a natural extension of the relationship these human beings shared together. In Kissed Sandra Larson was attempting to connect with men that she did not know while they were alive. Is this normal? I don't know, others will certainly have to decide. But don't judge the film for what it is not-a glorifying piece of cinema approving a behavior most of us certainly do not understand. See Kissed for what it is, a fascinating portrait of a woman and her obsession told in a beautiful, intelligent, and above all mature manner.