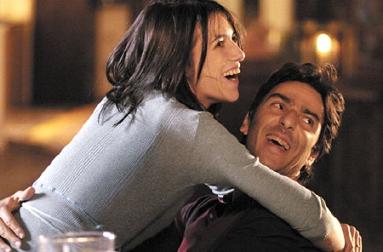 The Film:
Vincent (Yvan Attal) and Gabrielle (Charlotte Gainsbourg) live almost a perfect life. Almost…They are visibly in love, they enjoy each other's company, they go out together on the weekends, they even have great sex. But like most every other man Vincent has stopped wishing about a passionate affair and has materialized his dream with a beautiful blond woman which he sees every once in awhile in a hotel room not far from his workplace. Suspecting that Vincent is not the most faithful of all men Gabrielle has decided not to confront him but to swallow it all and keep their marriage in tact if for nothing else at least for the sake of their beautiful child.

At the Mercedes-Benz dealership, however, where Vincent works his two best friends, Georges (Alain Chabat) and Fred (Alain Cohen), are unsuspecting of his secret affair. In fact they envy Vincent for the perfect relationship he shares with his wife. In the meantime Gabrielle grows more and more bitter of the way her life progresses with Vincent and often finds herself secretly wishing about having an affair on her own. One day while browsing the CD collection at a local music store she nearly falls for a young and very attractive man (Johnny Depp) who nonchalantly smiles at her. Is this fate's invitation to Gabrielle? Funny…is that what it takes to put a marriage, a child, and all these years spent together with Vincent in the past?

ls se marièrent et eurent beaucoup d'enfants a.k.a Happily Ever After is yet another film from the enigmatic real life couple Yvan Attal/Charlotte Gainsbourg which first appeared in the romantic comedy My Wife is an Actress (2001). With Yvan Attal once again appearing in the director's seat Happily Ever After is very much a European dissection of all possible relationship issues you could imagine presented to us with a tasty twist of light comedy which is as funny as it is also quite thought-provoking. Consider for example the dilemma which Gabrielle has in front of her-at what point does she confront Vincent and tells him that she knows about his affair? Timing appears to be everything even in this light romantic comedy. If Gabrielle confronts Vincent the very moment she finds a proof that he has been unfaithful there would be very little that would prevent the couple from a possible break-up. Now fast forward a bit and consider what Vincent has come to realize…that his affair is just a distraction putting an enormous strain on his beloved family. Is it however too late? Has Gabrielle already made up her mind? Is their child just a pretext for keeping a doomed relationship in tact? I loved the manner in which the film juggled with all of the options the main protagonists had. It certainly made their hesitance to move forward that much more enjoyable for me and quite frankly made me stay until the end credits rolled.

What really serves as a litmus test for this film however is…Johnny Depp's character. And unfortunately for those that seem to enjoy his presence he is more than a bit off in Happily Ever After. Not because he is not good enough, quite the contrary…he is perfect in what he does. So what seems to be the issue then? Quite frankly I don't think that there are that many women out there that would pass on an inviting glance from the sexy heartthrob and continue listening Radiohead's famous "Creep". With other words here's a friendly advice to Mr. Attal: next time you decide to invite an actor that brings an edge and authenticity to your films please do not cast Johnny Depp as your average white male nonchalantly browsing the CD aisles at the local music store while willingly exchanging looks with middle-aged, possibly in a family crisis, women. Why? Chances are not only Gabrielle but any woman out there would fall for him. It is that simple!! 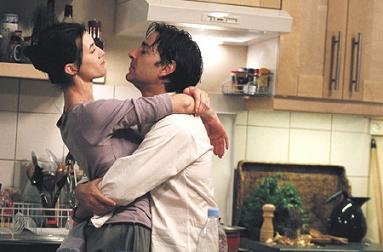 If you are looking to discover the ultimate answer to what drives divorce rates up and successful marriage rates down look elsewhere as Happily Ever After certainly does not provide one. In fact, it only further strengthens already well-known clichés about men and their tendency to act and substantially later on consider the consequences of their deeds as well as…women's tendency to follow up rather convincingly. What you would discover with Happily Ever After is a somewhat funny story of the dilemmas modern couples encounter and the often awkward situations they slip in without thoroughly realizing what is at stake.

-An Interview with writer-director Yvan Attal

-A deleted scene with a commentary by Yvan Attal