Other // Unrated // August 1, 2005 // Region 2
List Price: $24.99 [Buy now and save at Cd-wow]
Review by Svet Atanasov | posted September 15, 2005 | E-mail the Author
The Film:
For generations of Frenchmen Asterix, Cleopatra, and the rest of the cartoon characters created in the early 1960s by Alberto Uderzo (cartoonist) and Rene Goscinny (scriptwriter) hold some dear memories. In fact, they were so successful that for a number of years film directors did not dare touch the Gallic heroes afraid of disappointing the thousands of passionate fans around the world with an inadequate adaptation. In Europe, the Asterix phenomenon slowly grew bigger and bigger and by the early 1980s the comic hero was rivaling its North American competitors, Superman, Batman, and the Mighty Mouse, quite successfully. In places as far away as Russia and Australia Asterix gained the love and dedication of millions of kids that were reading his stories. In its native France, the superiority that Asterix established was unquestionable.

It was 1999 when director Claude Zidi finally had the courage to put together a workable script which unfortunately for many of Asterix's fans quickly turned out to be a disaster of paramount proportions. Asterix and Obelix Take on Caesar (Astérix et Obélix contre César) bombed at the French box-office and left a bitter taste even between the most dedicated fans of the charismatic cartoon character. Plans for a possible sequel quickly cooled off and all of a sudden everyone in France agreed that it might be a better idea if Asterix and his comrades were left alone resting in peace. 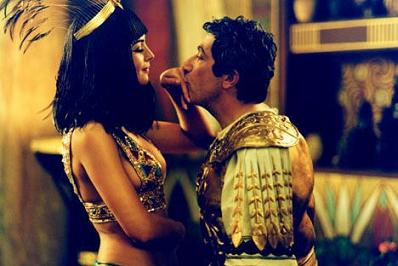 In the year 2000, however, a much older fan of the Asterix cartoon-series, director Alain Chabat, stepped up and announced that he was going to head an unprecedented for France and its film industry project that would breathe new life into the Gallic hero this time relying on a record breaking 50 million dollars budget, at the time the largest ever seen by the French film industry. The sequel to the disastrous first Asterix film was to be named Asterix and Obelix: Mission Cleopatra (Astérix & Obélix: Mission Cléopâtre) and was going to rely on an ambitious cast including some of the best actors France had to offer. The Asterix paranoia was again gathering some serious momentum. 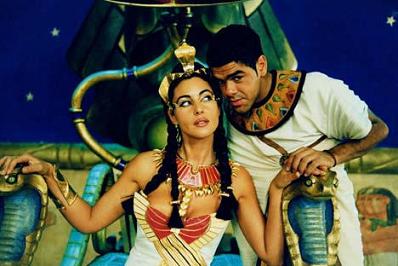 It seemed like this time around unlike his predecessor the director and member of the comics group Les Nuls Alain Chabat was taking the challenge very seriously. The cast to Asterix and Obelix: Mission Cleopatra was welcoming one of Europe's new divas, Monica Bellucci, and the buzz was everywhere. To assure maximum involvement the director himself became part of the new project playing the role of Caesar alongside French icons Gerard Depardieu and Christian Clavier. The stars finally seemed to be aligning for Asterix and his fans and in 2002 when the film hit the French cinemas it quickly transformed into an unprecedented financial success warming the hearts of its nervous sponsors. Somewhere Alberto Uderzo must have finally felt satisfied with the results.

The story of Asterix and Obelix: Mission Cleopatra revolves around Caesar's (Alain Chabat) bet with Cleopatra (Monica Bellucci) prompted by a rather insulting comment ("You people are declining…you are no longer the ones who built the pyramids"). Caesar challenges Cleopatra to prove the greatness of her people and in return she promises to erect a palace in the middle of the desert that will honor Caesar's greatness. Quickly all of Egypt's architects are summoned to Cleopatra and the daring task of building the palace that will defend the country's reputation is granted to Numerobis (Jamel Debbouze). If he succeeds with this project in the time specified by Cleopatra he will be richly rewarded, however, if he fails to erect the palace in three months Numerobis will be fed to the crocodiles. It seems like the incentive is surely there… 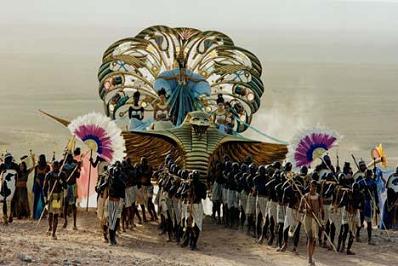 It is not difficult to say what separates Asterix and Obelix: Mission Cleopatra from its disastrous predecessor-the dialog is well-written, the acting is superb, the film is full with witty remarks which elevate it from more than just an eye-feast, a tremendous supporting cast that truly compliments the main protagonists, a director's vision that reveals the passion of a long-time Asterix admirer. On the other hand there are plenty of faults that one could find in this feature film-at times Asterix and Obelix: Mission Cleopatra feels too pompous, the Latin references might prove a bit too challenging for some of its viewers, the massive stage sets that are obviously meant to rival some of Hollywood's more successful blockbusters, a number of hilarious references that might quickly go out of fashion.

The cast of Asterix and Obelix: Mission Cleopatra however is extremely homogenous therefore negating much of the imperfections in this charming adaptation of Alberto Uderzo's story. Perhaps the most unfortunate surprises in the film come from the actors that everyone expected will carry the film, Gerard Depardieu whose performance often drags a bit, and to a lesser extent Christian Clavier, whose humor is not as razor-sharp as it normally is. On a positive side, the story stays true to the final chapter of Asterix's adventures.

Looking back at the history of this production one must wonder what was going through the minds of its creators when they initially agreed to support it. It must have taken a lot of courage to follow up the steps of the horrendous first installment as this surely was a make-it-or-break-it deal for everyone involved. With prestige and financial investments behind Asterix and Obelix: Mission Cleopatra at stake, even a minor failure would have backfired at both actors and sponsors in a resounding manner. Fans were also not itching to give Asterix a second chance, though the wishful thinking was certainly there. Thankfully Alan Chabat and his team have delivered a film that while not spectacular offers a steady dose of humor and more than lived up to the expectations of both fans and critics. 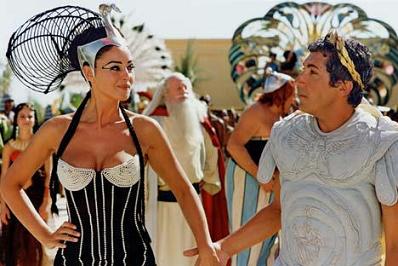