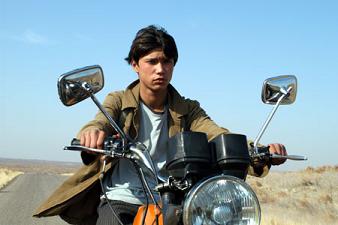 The film:
In the once glorious union of Soviet states chaos has taken over. Deep into the far East Kazakhstan has gained its independence but instead of economic prosperity and political stability the country is swamped by criminal elements and homeless beggars trying to make ends meet.

The infrastructure of the state is nearly non-existent: cars are barely seen running, electricity is often down, fresh water and medical supplies are a rare commodity. Yet, for fifteen-year old Mustafa, or as his friends call him Schizo (short for Schizophrenic) life still has a lot to offer.

When Schizo befriends his mother's lover (Eduard Tabyschev) everything changes in a matter of days. He quickly enters the underground world of illegal boxing where men would fight for money.

After a regular "match" goes wrong and one of the boxers dies in Schizo's hands the money, food, and attention of the local girls quickly become pointless. The local labor market where Schizo would typically look for new talent rejects him.

He lives far away from the village in a shack resembling what the mind of Tim Burton would invent. Like most unemployed men Schizo's uncle is also constantly inebriated. Once a powerful fighter the old man now looks like a ghost.

With family pride running deep in Schizo's kin the uncle agrees to follow the skinny boy back to the city. But what good can the future hold for a half-sober man, a mentally sick boy, and a world where life is as cheep as a pair of worn out boots? 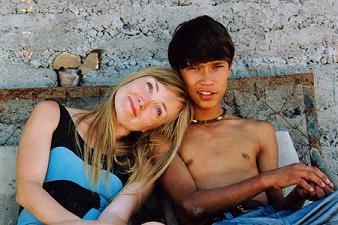 Directed by Gulshat Omarova Schizo is an enormously beautiful film to behold where nearly all of the main characters are played by amateur actors. Yet, it feels as if the cast gathered by Omarova have long rosters of films and years of experience in the film industry.

In addition to the excellent acting the camera work in Schizo is absolutely spellbinding. Towards the middle of the film when the main protagonist arrives in the countryside searching for his uncle we see a huge battered shack in the middle of an apocalyptic-looking wheat field. There is no electricity, no power, or a transportation device of any sort. The view is sublime, so powerful, a good enough reason to see this film.

The simplicity of the story however is what truly transforms Omarova's work into a memorable cinematic experience. One could tell by the faces of the actors that for many what takes place in Schizo is daily life. The chaos, pain, and sense of helplessness are without a doubt gut-wrenching!!

Schizo was part of the official selection at the Cannes Film Festival (Un Certain Regard) in 2004 and was awarded the Best Female Director Award at the Copenhagen Film Festival in Denmark.

Presented in its original aspect ratio of 1.85:1 and enhanced for widescreen TVs Schizo looks very good. Excellent contrast, good and fleshy colors, mostly stable image and a relatively low degree of edge-enhancement certainly make this print worthy of recommendation. With this said I did notice a minor degree of macro-blocking especially at the labor market scenes as well as edge-enhancement but overall I am pleased with the transfer. The film was also recently released in France and it would be nice, if possible, to compare what the R1 looks next to the R2 release. As it is however this release makes me extremely happy to see Schizo available in North America. (*Please note that all screen caps in this review are "media-shots" and are not directly taken from the DVD provided by Picture This Ent.).

Schizo offers a very eclectic soundtrack, one with an almost ambient vibe where light electronica is mixed with exotic folk tunes. Dialog is well-separated from music and overall the 5.1 mix (Russian) comes along really well. There are optional English, Spanish, and French subtitles.

The following extras are present on this disc:

A gallery of other Picture This releases-

An extremely emotional film that comes from a part of the world we rarely hear about Kazakhstan-made Schizo provides a glimpse at a state where life is a surreal experience! Powerful, edgy, and with an enormously talented cast Schizo comes HIGHLY RECOMMENDED!!