Ren & Stimpy Show: Season Five and Some More of Four, The 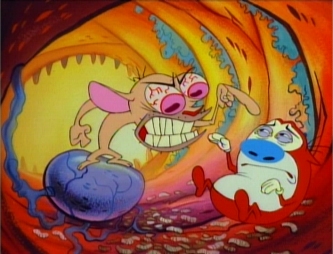 Remember that scene in The Simpsons when Bart and Lisa stared in shock at the TV while Itchy and Scratchy sat peacefully on the porch, drinking lemonade instead of killing each other? That'll be what you look like when you watch the final seasons of Ren and Stimpy. The show certainly started with a bang, as Nickelodeon's fledgling lineup of animation had a new champion almost immediately following its August 1991 premiere. Though the success of Ren and Stimpy lasted longer than its creator's time with the network, his 1992 departure resonated deeply with fans. Spümcø---the animation company Kricfalusi founded, named after industry pioneer Raymond Spum---was a fountain of ideas, so a few of them were built upon for later episodes. Bob Camp, a friend and colleague of Kricfalusi's, eventually took the helm (much to the dismay of many Spümcø employees), with Nickelodeon eventually controlling the show's production completely. It was all legal, of course--after all, John K. sold the rights for Ren and Stimpy to Nick before the first episode aired---but it quickly proved to be the show's downfall.

Many fans cite the first season (and a good deal of the second) as the "true" adventures of the lovable cat and demented Asthma-Hound Chihuahua, and for good reason: it set the foundation that Nickelodeon would "borrow" after most of the original team departed. After John K. and company left, most of the new team didn't make much attempt to establish its own style. As a show that relied on gross-out humor and disgustingly memorable characters, Ren and Stimpy became too comfortable with its formula. Unfinished episodes created by Spümcø were completed by Games Animation (Bob Camp's company)---and honestly, they do a decent job of keeping things up to par. Unfortunately, it didn't stay that way for long; while there were still a few gems to be unearthed, it didn't take a genius to figure out the business was under new management.

For these reasons, it's no surprise that the first two seasons of Ren and Stimpy---currently available in a convenient 3-disc set from Paramount---included the series' best moments. Even the last volume, Seasons Three and a Half-ish, contained a handful of decent shorts to keep the collection relatively entertaining. By the time the show reached its fifth and final season, however, it wasn't hard to see that the well had run dry. The spark and energy of earlier seasons just wasn't that strong anymore, the production values and art weren't up to par, and…well, you get the picture. It's hard to believe the show's been dead and gone nearly ten years now---aside from the short-lived Adult Party Cartoon series in 2003, of course---so the lackluster final seasons of the original Ren and Stimpy Show aren't exactly a secret at this point. This final DVD collection offers one-and-a-half seasons of pure, unadulterated cartoon mediocrity, including the following shorts: 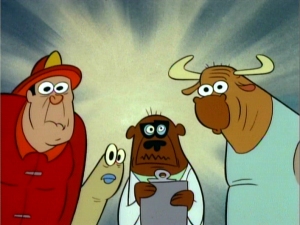 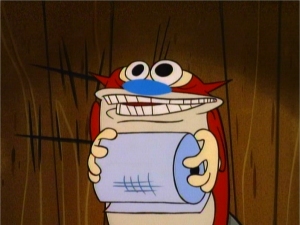 Again, it's easy to see that the quality of the show is down the toilet at this point---literally and figuratively. While Ren and Stimpy always aimed for gross-out humor right from the start, the outright psychosis of the stories helped to take the series to a new level. By the time Seasons 4 and 5 rolled around, the show simply relied on topping itself in toilet humor with each passing week, shoe-horning the sick scenes in between paper-thin plots and stories. Overall, this batch of shorts seems more like a parody of the older stuff than anything else: a few bright spots like "Ren's Brain" and "The Last Temptation" keep things from being completely bad, but the large majority of the content is a pale shadow of its former self. The included audio commentaries help to even things out a bit (more on that later), but overall, there's not much here to get excited about.

This 3-disc set isn't without a few highlights, but it could actually be much worse. Paramount has once again delivered a decent technical presentation and a few worthwhile extras, salvaging what has proven to be a lackluster batch of actual shows. While the complete package may not add up to a collection worthy of your hard-earned money, there's enough here to warrant a closer look.

Quality Control Department
Video & Audio Quality:
As with past volumes, these episodes are presented in their original 1.33:1 format. Colors are bold and bright, while the overall transfer appears clean and polished. The only mild problem here is a moderate level of interlacing---especially common in animation DVDs---which creates a bit of softness and blurriness during scenes of action (a problem also present in earlier volumes of the series).

The audio is also a quality presentation, as the included English 2.0 Stereo mix is front-heavy but surprisingly dynamic with a lively atmosphere that gets the job done. No subtitle options have been provided, though this release supports Closed Captioning for the hearing impaired. 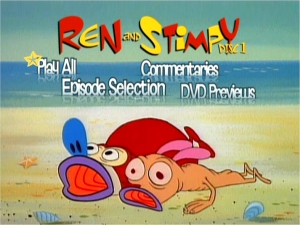 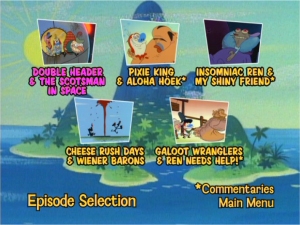 The appropriately-themed menu designs (seen above) are smooth and simple, offering easy navigation and clean layouts. The 12-minute shorts have been presented with two chapter stops (one for the opening theme, and one for the actual story), while the longer 24-minute episodes are presented with roughly double the amount. Speaking of the packaging, Seasons Five and Some More of Four follows suit with past collections: each of the three discs is housed in its own slim case, with everything squeezed snugly inside a colorful, glossy slipcase. Only a promotional insert has been included, though each slim case also offers a complete episode listing and summary.

Bonus Features:
Continuing the trend started by the last volume, this collection features a nice assortment of Audio Commentaries to spice things up. By this point, it's the only logical step: we know the cartoons aren't great, so why not hear why? Returning here are members of the Spümcø team---including, of course, creator John K.---as well as a few members of Games Animation, including artists Scott Willis and Bill Wray. It's nice to hear several different viewpoints during these 14 tracks (identified in the episode listing above), especially when the two "opposing teams" are herded together. On two occasions, each "side" gets their own mic time---and, like last time, there's also a commentary by Ren & Stimpy themselves, voiced by John K. and Eric Bauza. Though the former participant seems less than thrilled during a few sessions, he manages to fill most of the time in a creative and entertaining manner. These tracks aren't necessarily required listening for fans of the show, but they do help to provide a nice layer that saves this collection from scraping the bottom of the barrel.
Final Thoughts

I want to recommend this release...I really do. Here's the problem, though: the first collection offered a handful of classic cartoons and terrific extras. The second collection offered halfway decent cartoons and some interesting commentaries, helping to explain how and when the show actually got derailed. By this third and (thankfully) final collection, it's obvious that the show is completely over the falls without a barrel---and as interesting as the commentaries are this time around, only the most die-hard Ren and Stimpy disciples should bother adding this one to their collections. It's really sad when any show burns out quickly, but it's even sadder when a studio beats a dead horse. By and large, fans of animation are advised to give this one a weekend look at the very most. Rent It.

Randy Miller III is a sick little art instructor and gallery assistant based in Harrisburg, PA, who also enjoys freelance graphic design and illustration. When he's not doing that, he enjoys slacking off, general debauchery, and writing things in third person.