Serious jazz has always been somewhat of a persona-non-grata for mainstream radio stations. In recent years with the explosion of the so-called "soft-jazz" programming, which is nothing more than well-polished lounge music sprinkled with a mix of sax tunes, what serious music aficionados describe as "professional jazz" has been on decline. Unless you happen to live in a very large metropolitan area where there are still a few jazz clubs left struggling to make ends meet or, you live in a vital college town where the local university passionately supports its jazz department providing funding for live shows I would say chances are you are not seeing that many live jazz performances. Sad but true.

For those of you however living in the city of Montreux luckily the local Jazz Festival delivers what can be described as a healthy dose of quality jazz music. Which is where in 1998 Dutch-born alto saxophonist Candy Dulfer delivered a remarkable show mixing funk, jazz, soul, and a variety of other styles. Unlike many of her fellow colleagues, however, the manner in which Candy Dulfer mixes her music hopping from funk to pop to jazz actually works. She knows how to stay just a tad away from being too pop yet close enough to the jazz genre so that she could appeal to those that actually like their jazz in a more conventional, old-fashioned, form. 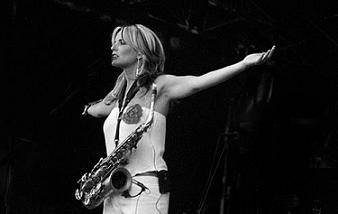 Like many others, I suppose, my fascination with Candy Dulfer began with her enormous European hit "Lily Was Here", part of her "Saxuality" album, where she teamed up with Dave Stewart from Eurythmics (the song consequently became a Top 10 UK hit). Add to the mix Candy Dulfer's enormously captivating stage presence and of course irresistible looks and I was quickly transformed into a die-hard fan. Ever since I have followed her career rather closely and though she hasn't been as active as she once was when she stopped at Montreux back in 2002 I made sure to book a plane ticket.

Courtesy of Eagle Rock Entertainment this very well put together DVD presents Candy Dulfer's 2002 show in Montreux and as a bonus feature we are offered a few selected performances from her famous 1998 show as well. While the newer 2002 show clearly unveils a more subtle, relaxed, and perhaps more mature saxophonist, the 1998 performances bring back memories of a wilder and in my opinion more intense Candy Dulfer (a newly arranged version of "Lily Was Here", of course without Dave Stewart, also appears in the bonus section).

Released individually as a CD, and now on DVD, Candy Dulfer's Live at Montreux 2002 show has the following track listing:

6. Pick Up The Pieces

It is worth pointing out that there is a slight difference between the CD release of the 2002 Montreux show and the actual DVD presentation. "Lost and Gone" appears only on the DVD release and "Pass the Peas", "Gimme Some More", and "2 Miles", appear only on the CD release.