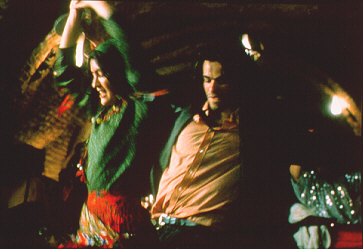 In the middle of frozen Romania Stephane (Romain Duris), a twenty-something Frenchman, is desperately looking for a sign that would lead him to a mysterious gypsy singer his father once adored. Equipped only with a portable cassette player, a light anorak, and a pair of busted shoes, Stephane is visibly lost. However, when he encounters Izidor (Izidor Serban) an ethnic Romanian gypsy, he is taken to a primitive village where electricity is often looked upon as God's greatest gift to men. Hardly speaking a word of the Gypsy dialect the locals use Stephan is drawn into a sea of boisterous rituals, never-ending drunken parties, and a culture he knows very little about. Soon what begins as an exotic search of a mystic singer evolves into a journey of self-discovery where Stephan must make some difficult decisions.

Directed by the enigmatic Tony Gatlif (Exils; Vengo), a man from a mixed Algerian-French-Gypsy descent, Gadjo Dilo a.k.a Crazy Stranger offers enormous poetic beauty which I have only partially seen in the films of Emir Kusturica. While Kusturica's works however are often lavishly produced revealing the polished camera work of a director that Cannes has embraced as its own son in Gadjo Dilo Tony Gatlif delivers that raw, almost documentary-like, authenticity that will certainly leave you breathless. There is also something else that profoundly separates Tony Gatlif from Emir Kusturica. We often see in Kusturica's films the desire of a director to outgrow his own country, his consistent focus on the political inability of Serbia to become a civilized country. In Tony Gatlif's Gadjo Dilo there are hardly any hidden political overtones. From beginning to the end this is a film that simply celebrates life. 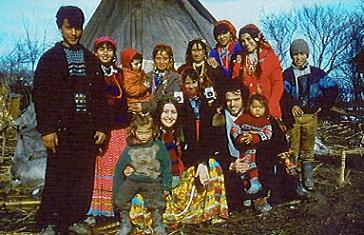 I suppose like every other film lover I am guilty of constantly comparing Gadjo Dilo to the early films of Emir Kusturica. I even caught myself drawling parallels between Goran Paskaljevic's award winning Bure Baruta a.k.a Cabaret Balkan and Tony Gatlif's work desperately attempting to locate some sort of a common thread, a formula that explains in simple terms the logic behind a gypsy culture we know very little about. Because there is plenty in Gadjo Dilo that would create consistent head-scratching between those accustomed to rational behavior. I mean how else you would explain the fact that at the dawn of the 20th century there are still communities in Europe where people do not have access to fresh water, there is no electricity, yet music is looked upon as a divine miracle.

There is hardly a plot in Gadjo Dilo that the viewer will be interested in once Stephane is introduced to the gypsy village. Yes in the back of our minds we know that he is on a mission to discover a singer that his father was in love with but we never really care what she looked like, where she was from, or how exactly Stephane will find her. What we care about is the gypsies we see running naked in the snow, the dances and songs they perform, the drunken rakia-infused celebrations they enjoy, and of course the amazing language of gestures which Stephane and the gypsies must rely on. This truly is an amazing film that leaves very little to the imagination.

I would like to specifically point your attention to the fact that with the exception of Romain Duris there are no professional actors in this film that you are likely to have seen in another movie. What you see is what you get…pure, unpolished, raw "acting" that simply recreates the gypsy culture in Romania-some of it poetic, some of it dirty, and some of it perhaps a bit dangerous.

To think however that the gypsies portrayed in Gadjo Dilo are simply an isolated community immune to racial, economic, or even class issues is to greatly misinterpret their role in modern-day Romania (or just about any other Balkan country for that matter). Living on the outskirts of a country where they are hardly considered "Romanians" the gypsies are often a target of racial abuse and even deliberate state-approved prosecution. And from what we see in Gadjo Dilo they have their fair share of "involvement" in this complex state as well-they often steal (what else would they do, there are no jobs for them), they get involved in pointless arguments, and they are equally disrespectful to state laws...like those that are supposed to implement them. 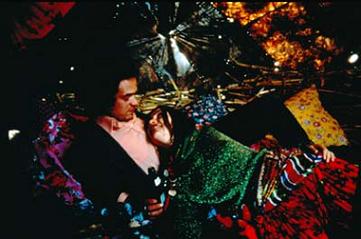 Films like Gadjo Dilo don't come around that often. And I really mean it. I am not attempting to generate an artificial buzz around it for the sake of simply promoting a "different film". This is indeed a very unique production that redefines the meaning of the term cinematic experience. Outstanding!!!

I continue to wonder why is it that New Yorker insist on providing average transfers for their DVD releases. They certainly remind me of the old saying about the right hand not knowing what the left hand is doing. Someone in the company certainly has a good taste and understands what quality cinema entails…yet there is a certain member(s) of the company that simply does not care what the market requires. This is so sad considering the fact that with improved transfers (please avoid the dreaded PAL ports) and decent cover designs New Yorker can most definitely be one of the marquee names among DVD distributors.