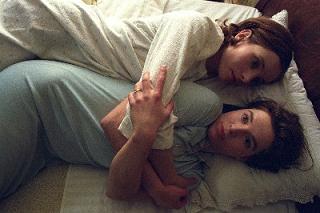 When six years old twin sisters Lotte (Julia Koopmans) and Anna (Sina Richard) see their mother fall victim of a deadly disease everything they have known-the morning walks in the garden, the cheerful songs their mother would sing, even the witty stories their mother would tell them late at night-everything disappears in an instant. Lotte, the often sick little girl, is taken to an upper class family in Holland where she would reside with a distant relative. Anna, the healthier sister, is taken back to the farm of her strict uncle in northwestern Germany where she would spend her time until she grows up and is able to take care of herself. Separated by hundreds and hundreds of miles and a war that is slowly changing the map of Europe the two twin-sisters hardly even communicate. Until one day fate will bring them back together.

Based on the bestselling novel by Dutch writer Tessa de Loo De Tweeling a.k.a Twin Sisters is a beautiful film recapturing the uneasy times of war-ravaged Europe where two sisters are desperately attempting to regain their identity. Unlike many of the films we have seen recently that deal with the subject of war this is an enormously intimate film that never really aspires to be an adequate representation of the events from 1920-1945. On the contrary De Tweeling elaborates on the idea that no matter what side you happen to be a part of during wars there are no real winners, there are only victims left to deal with the consequences of human madness.

De Tweeling is a brilliantly structured film that certainly works on multiple levels. The masterful eye of its director Ben Sombogaart is especially effective in the manner in which the horrors of the raging war are portrayed in this picture. There is hardly any fighting in De Tweeling yet the emotional struggles which the main characters are exposed are comparable to the devastating impact films such as Roman Polanski's The Pianist easily convey. By sparing its viewers the graphic depiction of human struggle I believe that Ben Sombogaart achieves a very fine degree of subtlety that not that many films offer.

Perhaps the biggest asset of this film however is the dilemma which the story presents within the second part of De Tweeling when Lotte and Anna confront each other over the men they love. As fate will have it Lotte falls in love with a wealthy Jewish man who gets deported to a concentration camp in Germany. He is soon transferred to one of the notorious "death-camps" and from what we are told in the film shortly after executed. Anna on the other hand gets a job as a maid in the family of a German baroness as the war continues to spread over Europe. She consequently falls in love with a German soldier and during one of the very few visits to her sister in Holland she is stunned to "discover" that her sister is in love with a Jewish man. The "discovery" presents an enormous problem for the two sisters as they are visibly incapable to outgrow the social stigma which the war has placed on them. I really think that this is where the film picks up pace and evolves into a much more serious analysis of the choices people make during political conflicts. The moral angle that De Tweeling conveys is not a confrontational one but certainly a very thought-provoking one.

Submitted as the official Dutch entry to the Academy Awards (Best Foreign Language Film) in 2003 De Tweeling is an enormously powerful film that unlike many of its counterparts (films that deal with the subject of war aspiring to convince us that they are as realistic as a war picture could get) actually works extremely well. The film plants a very different kind of horror in its viewers, even a sense of desperation I would say, fueled by the inability of two human beings to reach a common ground. As a result the tragedies and personal humiliation they are forced to endure destroy the only thing that binds them together-their love for each other.