I have a lot of fond Bewitched memories from my long-ago childhood days of watching TV in huge, 4-hour blocks. Like just about every male person of my approximate age, I fostered a deep crush for Ms. Elizabeth Montgomery, and I had a ball with all the nifty little tricks that she could do as a domestic housewife witch-woman. So when I sat down to dig through Sony's DVD collections of Bewitched, I found myself a little bit psyched – and a little bit worried.

Keep in mind that, in addition to Bewitched, I also grow up in love with sitcoms like Gilligan's Island, I Dream of Jeannie, Green Acres, and The Brady Bunch -- programs I now consider somewhat painful to watch. I was worried that seeing Bewitched through my now-(somewhat)-grown-up eyeballs would take a little luster off of the series, and that my now-inescapable cynicism would have me reaching for the STOP button within half an hour.

I needn't have worried, because Bewitched is as charming, amusing, and quaintly adorable as it's ever been. Oh sure, you'll find a lot of outdated "wifey belongs in the kitchen" material scattered amidst the chuckles, but hey, society was just a little bit stupider in the mid-60's. Putting aside the antiquated, yet never overtly off-putting, sexual politics aside, Bewitched is basically as sweet as an old sitcom gets.

Plus Elizabeth Montgomery, now forever immortalized on DVD, is just as beautiful as I remembered.

The plot is precisely as you remember, and if you're a newcomer to Bewitched, then the plot is simplicity itself: Darrin Stephens is a hot-shot advertising exec and newlywed husband to Samantha. And Samantha is, of course, a witch. A pretty, young blonde witch who promises her new husband that she'll absolutely try to curtail her nifty witchcraft practices – a promise that, of course, manages to get broken in each and every episode.

There's a colorful menagerie of supporting characters that continue to pop up throughout the first season's festivities: nosy next-door neighbor Gladys Kravitz and her long-suffering husband Abner, Darrin's likable boss, Larry Tate, Samantha's goofy old Aunt Clara … and then there's mother-in-law Endora. A true royal witch if ever there was one, Endora is constantly at odds with her daughter's befuddled husband and perpetually causing some sort of static in the Stephens household. (Agnes Moorehead is quite simply hilarious as Endora, stealing almost every episode she appears in.) And Season 2 is where we got to meet Tabitha, the adorable offspring of witchy woman and mortal geek.

One might suspect that a TV series beholden to one relatively clever gimmick – Samantha's witchery and the silly old tricks she's always playing – would lean on that gimmick to a desperate degree. But this is where Bewitched transcends simple silliness. You'll find as much wit and good cheer from the simple dialogue and acting performances than you will from the antiquated-yet-still-effective special effects showcases. Bewitched is a warm and witty series, and one that holds just as many giggles today as it did during its 1964 debut. The witch-tricks might have been enough to entertain me as a 7-year-old, but it's the good humor of the material, and the effortlessly charming performances by Elizabeth Montgomery and Dick York, that I found most entertaining as a crusty ol' 30+-year-old.

But that's not to say that Bewitched is nothing but tasty fluff. Believe it or not, this is a series that actually blazed a few trails in its day: Darrin & Samantha were among the first TV spouses to share a single bed, Endora and her estranged husband were clearly divorced (or at least separated), the idea of Sam & Darrin being a "mixed" couple raised its head a few times, and there's one Halloween episode that displays a lot of insight into the way in which those who are "different" are often categorized in horribly stereotypical ways. (Anyone out there think that Samantha Stephens looks like your typical wart-nosed, hunch-backed, cauldron crone? Didn't think so.)

While it's certainly true that Bewitched's second season got a bit sillier than the initial season was (how many things can Darrin be turned into before he just loses his mind?), it's still a warm & comfy piece of TV nostalgia. Those who rushed out to the store to purchase the first season set should have no problem doling out another 25 smackers on the sophomore season set.

Those who hold this classic sitcom in high regard should absolutely consider this full Season 2 set a must-own. But you might want to double-check the DVD case before making your purchase; in an effort to appease the folks who like to see classic artworks molested in the name of simple commerce, Sony has decided to release the Bewitched Season 2 set in two separate packages (exactly like they did with Season 1). Both releases are nearly identical in every way – but one set is presented in the original black & white, while another has been "colorized" for your convenience.

And perhaps I'm just a snooty old purist, but colorization pretty much – well, sucks is what it does. While it's true that the technologies used to colorize an old TV program have improved drastically over the years (anyone see Ted Turner's old colorization of King Kong? Yeesh.), there's just no getting around the fact that it just seems … kinda … off. But I suspect I'm probably preaching to the choir here; anyone who truly admires this great old sitcom will undoubtedly want to own Bewitched in its original broadcast format. And the more B/W versions that are sold, the more the message will be made clear to the powers-that-be: a sincere round of thanks for delivering Bewitched in fine DVD form, but next time … don't even bother with the colorization gimmick.

Disc 3 Disc 4 Disc 5 (I find it a little strange that Sony would opt to include a fifth disc for the final two episodes ... when two other episodes (one on disc 2 and another on disc 3) are simply repeats from season 1! Weird.)

The B & W release - The episodes are presented in their original fullscreen (1.33:1) format, and they clearly look a whole lot better than they did on the after-school UHF reruns! Heck, I'd bet they look crisper and cleaner than did during the original broadcasts! You'll still notice a few flecks on the prints, but they don't come close to marring the presentation in any noteworthy way.

The Color release - Ah, the irony. To colorize a TV show in the hopes of appealing to a more "modern" audience ... yet the color gimmick looks pretty darn awful. Remnants of Ted Turner's "colorize the world" campaign from several years back, these fuzzy and pastel displays are more distracting than anything. Every character onscreen seems to share the exact same flesh pigment, the Stephens home looks like a giant dollhouse, and several of the stock backgrounds belie the original black & white presentation: 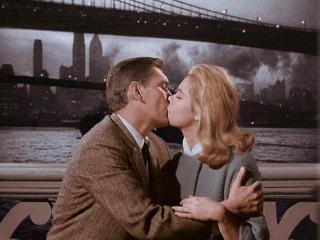 I mean ... just look at that. Yuck! And on top of all that, the colorization method seems to add a filmy layer over the whole of each episode. It's just a bit grainer, tackier, and less pleasurable to the eyes. Trust me, if you're a fan, you really do want the black & white collection.

Audio: It's just a Dolby Digital 1.0 track, but the sound is pretty darn pristine for a series that's over 40 years old. Dialogue is audibly clear, as are the silly little musical cues and the omnipresent and ever-appreciative laugh track chortles.

Somewhat disconcerting is that fact that Sony opted to include a few extra audio tracks and subtitles within the color release -- but not the black & white. If you want to enjoy Bewitched in its original broadcast form, you can do so with optional English captions. But if you purchase the color version, you have the availability of Spanish & Portuguese audio tracks and subtitles in Spanish, Chinese, Portuguese, and Thai. Why these options are not available on both releases is quite a mystery. No, I don't exactly need subtitles in Thai, but why would they be included in one package and not the other?

I freely admit that I had a ball getting reacquainted with Sam, Darrin, Endora, and the rest of the original Bewitched gang during season 1, and while the follow-up collection isn't exactly as sharp, it's still full of old-fashioned sitcom fun. I'd even go as far as saying that of all the classic old 60's sitcoms, this one still holds up among the very best. Yes, some of the seriously outdated "a woman's place is in the home" perspectives might have you chuckling in disbelief, but Bewitched has such a sunny disposition and warm veneer – it's tough to get really offended by the time-capsule silliness. Plus, hell, the wife is a WITCH (and the star of the show), so it's not like she's the victim here! Also, Sam's no dummy: she knows how to use that witchcraft when hubby's not looking – thereby allowing him to think he's the boss … while she knows who is!

Just like the first DVD set, Bewitched – The Complete Second Season easily earns our Highly Recommended rating, thanks to a series that offers just as many good, goofy laughs as it did when you were seven years old. Fans of classic sitcom material should consider this 5-disc set a must-own … but please -- just stay away from the colorized version.

A classic series like Bewitched doesn't need an extra coat of pastel-plated paint to make it worth watching.