Leni Riefenstahl is best known for impressive her directorial work, most notably the films Triumph des Willens (Triumph of the Will) (1935) a propaganda film about the 1934 Nazi Party rally in Nuremberg and Olympia (1938) which chronicled the 1938 Olympics in Berlin.  Before she ever stepped behind a camera though, Leni was a successful actress.

She first came to the public's attention while staring in a series of mountaineering films directed by Arnold Fanck.  Fanck held a doctorate degree in geology, and was an avid mountain climber.  He thought that the drama and danger of ascending peak would make the perfect setting for a film, and he was right.  He built a career around mountain epics. 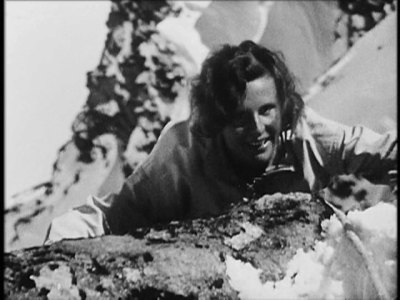 Kino has now released a trio of Fanck's films that star Leni Riefenstahl.  They include S.O.S. Eisberg, Stürme über dem Mont Blanc (Storm over Mount Blanc) [review], and this film, widely regarded as the best film that Leni Riefenstahl stared in; Die Weiße Hölle vom Piz Palü (The White Hell of Pitz Palu.)  In this film Fanck was assisted in his directorial duties by G. W. Pabst, and they created a very entertaining and exciting film.

Maria (Leni Riefenstahl) and her fiancee Hans (Ernst Petersen) are vacationing in the Alps and plan to climb the Pitz Palu Mountain.  Soon after they arrive, they meet Dr. Johannes Krafft (Gustav Diessl), a man who is haunted by his past.  Dr. Krafft attempted to climb the Pitz Palu on his honeymoon, but his wife died in an avalanche and her body was never recovered.  From that time on he has wandered the mountain like ghost, trying to scale the unclimbable north face.  He's never been able to do it because of the lack of a climbing partner.

When a local guide Christian (Otto Spring) mentions to Dr. Krafft that a group of students are arriving the next day to attempt the north face, he prepares to set out once again alone.  In the morning however, Maria and Hans insist on going with the doctor and helping him achieve his goal. 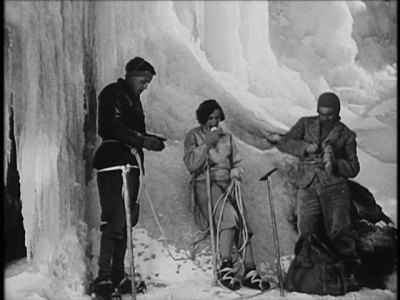 The students have a head start, but the older trio climb a steeper but faster section of the mountain and are soon ahead of them.  After a break, Hans insists on leading the way, and slips.  He's seriously wounded his head, and Dr. Krafft climbs down to rescue him.  Unfortunately the pair get trapped in a small avalanche, and Krafft breaks his leg.  Halfway up a mountain with two wounded men, the group can't get down and their only hope is to be rescued.

This is a very exciting film, and great fun to watch.  It started off at a gallop with Dr. Krafft's wife getting killed in an avalanche, but then takes the time to introduce the other characters and develop their personalities a bit.  The race with the students was a nice touch, lending a sense of urgency to the film.  Of course this pales in comparison to the life and death situation the group soon becomes trapped in.  There are several very tense scenes, and the suspense is really gripping at times. 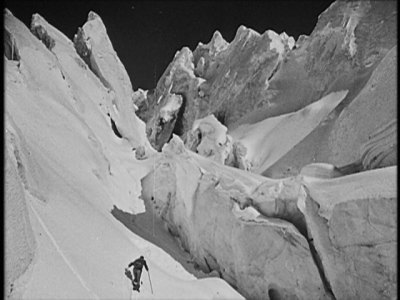 Directors Fanck and Pabst also created a very visual film.  Some of the mountain scenes are truly stunning, especially the night shots that were lit solely with torches that villagers were carrying.  In addition to the breathtaking scenery, Fanck created several avalanches which were also impressive and added to the look of the film.

One trick that I noticed Fanck using in this movie was that he'd film the men differently from the women.  When Leni had a close-up she'd be filmed in soft focus, making her look somewhat angelic.  The male leads, on the other hand, would be photographed in a stronger light and with a sharper focus bringing making their features stand out and giving them a more rugged look.  This is a trick that Leni Riefenstahl would use in her own films.

The stereo audio track sounds excellent.  The score, preformed by a full orchestra, was composed by Emmy winner Ashley Irwin and it is very good.  Though he sometimes emphasizes the emotion of a scene a little too much, bellowing dramatic music every time Pitz Palu was shown before the assent for example, the soundtrack added a lot to the film.  The march that was played while the torch bearing villagers start up the mountain at night was very effective.  The sound quality was very good, without any distortion or other audio defects.

Unfortunately, the original negative to this film is lost.  All that has survived is a nitrate print that was out of sequence.  This was reconstructed using the original censor notes as a guide and restored in 1997.  I'm very impressed with the results; the image quality is very good.  There are some spots and the occasional scratch, but these were minor.  The picture is sharp, and has a good amount of contrast.  The level of detail was excellent with the texture of the snow on the mountainside easy to discern.  This is a great looking film.  The only thing that I disliked about this restoration was that the intertitles were new creations and in English.  I would have preferred if the original titles would have been left in, but this is a minor critique since they did try to approximate the look of the original cards.

Exra features include an 8½-minute except from the 1935 sound reissue of the film (with poorly dubbed voices) and a very nice photo gallery of  promotional stills and advertising for the movie.

The most interesting feature is The Immoderation in Me an hour long interview with Leni Riefenstahl that was conducted in 2002.  In this interview, in German with burned in subtitles, Leni tours her house and shows some of the many mementos that she's kept from her life.  An amazing collection of photos, press clippings and film.  She has kept the original editing sheets from Olympia, and discusses the system that she used to edit the 400,000 meters of film that were shot.  The most amazing thing about this is that everything is neat and organized.  She was quite the archivist.

The interview was conducted in association with the release of her last film, Impressionen unter Wasser (Underwater Impressions) and a good amount of time is spent talking about that film.  Ms. Riefenstahl does talk about other aspects of her full life though, commenting at length on Triumph of the Will (she claims she never thought of the impact the film would have) and her relationship with Hitler.  I found it very informative and entertaining.  Whatever your opinion of Ms. Riefenstahl you have to admit that she lived a very full life.

The White Hell of Pitz Palu was a very pleasant discovery.  I hadn't seen this film before, and it was much better than I was expecting.  The scenery breathtaking, and the plot was very engrossing.  There was a lot of suspense and several nail-biting scenes that raised the film above the average.  The full orchestral score was powerful and added a lot to the viewing experience and the restored print looked fabulous.  The film itself is reason enough to buy this DVD, but the added bonus of an hour long interview with Leni Riefenstahl makes this a disc that silent movie fans should include in their libraries.  Highly Recommended.