Imagine a song so powerful that it literally forces those who hear it to tear their hearts apart and commit suicide. Now imagine that this very same song became an instant hit only months before one of the most tragic events in modern day history took place-World War II. That is exactly what happened to Gloomy Sunday, the infamous song which Hungarian musician Reszo Seress composed in the beginning of the century. In a matter of days the song became a radio hit that drove hundreds of people on the brink of committing a suicide. But why?

Reszo Seress was a struggling musician in pre-war Budapest attempting to make a living by accepting odd music gigs that barely helped him pay the bills. He would often argue with his fiancée and fiercely disregard her suggestions that he needs to get a "regular job" instead of relying on his talent to make ends meet. Eventually, like many gifted musicians involved in a committed relationship, Reszo faced the century-old dilemma of either following his passion for music or listening to his heart and following the love of his life. He made the more difficult decision-he chose music and consequently composed one of the most heartbreaking melodies ever that would spur a string of suicides from Paris to Moscow to the booming at the time city of New York. Rolf Schubel's film Ein Lied von Liebe und Tod a.k.a Gloomy Sunday retells the true story of Reszo Seress and his song. 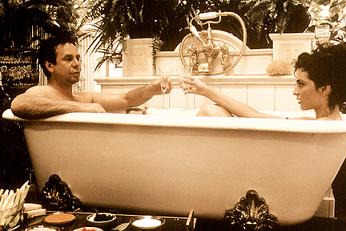 In the beautiful city of Budapest Laslo (Joachim Krol) is attempting to start a small restaurant where people can enjoy a nice meal while listening to the soothing tunes of a classical piano. With the assistance of his lovely waitress Ilona (Erika Marozsan), a gorgeous dark-haired beauty, Laslo must choose a deserving for the restaurant pianist. Unfortunately none of the applicants that he has auditioned seem what the restaurant really needs. But when Andras (Stefano Dionisi) walks in only minutes after Laslo has decided to call it a day and asks politely if he could audition for the job it seems like the tiny restaurant might have found a man with the proper music skills. Andras plays a beautiful Hungarian tune which Laslo and Ilona are impressed with and earns the gig.

A few months later when Ilona celebrates her birthday Andras presents an unusual gift-a lovely but sad melody called Gloomy Sunday. The melody is short yet so powerful that those who hear it immediately drift away in a sea of unfortunate memories often recalling the darkest moments of their lives. It is indeed a strange gift which Ilona is unsure how to accept.

In the meantime neither Laslo nor Andras seem capable of resisting the beauty of Ilona. They are both madly in love with her. Unable to cope with the pain of seeing Ilona with another man Andras decides to leave. But Gloomy Sunday has become such an enormous hit in Budapest that more people now come to the restaurant to hear the song than to enjoy the chef's culinary miracles. Realizing that without the splendid piano music the restaurant will never be the same Ilona begs Andras to stay. Deep inside her heart she is also torn between the two men she now loves and seeing either one of them leave would be a disaster. Andras agrees and the trio slowly begins to learn how to share their love. For awhile it all goes well until one day a German Nazi officer (Ben Becker) walks in the restaurant and approaches Ilona.

I don't quite know how else to describe my experience with Gloomy Sunday other than to say that almost five years after I first saw it (entirely in German without English subtitles) I still think about it. I did some extensive research to learn more about the fate of Reszo Seress and his song as I found it strange to say the least that a simple melody can force hundreds of people on the verge of committing suicide. Suffice to say the more I read the stranger it got.

Directed by Rolf Schubel this Hungarian-German production is easily one of the most stunning stories I have ever seen. For the unsuspecting viewer what might seem as your standard love triangle story is actually a perfectly structured film that delivers all the necessary components an intelligently made love story should offer. Above everything else however this is simply a beautiful film to behold. The Danube River, the beautiful old city of Budapest, and of course the enigmatic Erika Marozsan will without a doubt keep your eyes glued to the screen in a manner you have not experienced lately. Furthermore Gloomy Sunday offers a story that should appeal to those who prefer adult storytelling and not the cheap and often sugary plots we have come to expect from mainstream cinema. Each character is fully developed and there are no standard clichés that would spoil an otherwise sublime narrative. With other words this is an entertainment made for the thinking adult.

Gloomy Sunday is without a doubt a European film that I could only describe as a timeless epic. I am aware that too often film critics use this specific term to unjustifiably hype up a certain film they think deserves the proper accolades. Allow me to distance myself and claim that Gloomy Sunday indeed deserves all the praise it has garnered so far. This is a film that easily ranks as one of the best ever to recreate the domed relationship between three human beings and its intelligently structured narrative is between the best to ever come out of Europe.

Soundbites-a few selected interviews with the main actors and the director of Gloomy Sunday. All of the interviews are subtitled in English.