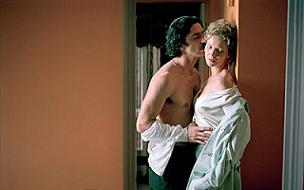 She (Joan Allen) is a lonely middle-aged American wife living a life full of lies and disappointments. He (Simon Abkarian) is a dark and handsome Lebanese man working as a chef in a local restaurant. She is tired of patching up a marriage where illusions are the only thing left to share. He is no longer capable of staying quiet when people question his religion. She is bound to meet him. He is bound to meet her. What follows up is a love story between two people willing to test what fate has to offer.

YES is simple, beautiful, and poetic. It is a film that asks many questions yet it hardly offers any answers. Love, God, sex, politics, and racism, are all entangled in an explosive mix where the viewer is asked not to expect a logical climax but to observe. The viewer is asked to analyze. And I did. I followed the innocent rendezvous between She and He, I listened to the rhymed dialog the film is built upon, and I laughed on the subtle yet aggressive statements director Sally Potter has snuck in attempting to enrage the dormant idealist in me.

YES is without a doubt a film of contrasts. You would either love the fact that it plays with your senses provoking edgy comments or you would hate it for the sake of being different, being a film that defies standard clichés. After all no one talks in rhymes, why would the director imitate Shakespeare in a film that deals with contemporary issues? Maybe because they are not so contemporary after all, maybe because Shakespeare still has something to teach us, or maybe because every once in awhile we need to see a film where the acting, the plot, the way the actors talk, are meant to wake up an audience accustomed to the typical for our cineplexes ninety minutes of "unpredictable storytelling" a.k.a boredom. 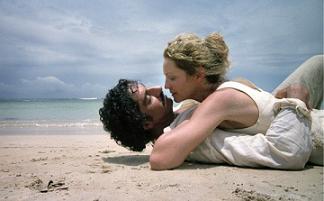 This is a film that reminded me a lot about Baz Luhrman's rendition of Romeo and Juliet and I am sure I am not the only one that liked its witty style. The unusual approach which Sally Potter has used to put together a story where two people learn to love each other by beating the odds fate has to offer really struck a chord with me. Imagine how boring of a picture YES would have been if we had yet another "updated" version of When Harry Met Sally where a bored and sexually frustrated woman in her early 40s meets a foreign man working as a chef in London? We would get the usual talk, the predictable "he is willing, she is not", and of course the favorite for Hollywood lesson of "we told you so, having an affair with a single man with an accent is bad". O, yes I think I've seen this film before. Instead we are introduced to two characters that think and more importantly speak with their hearts…using the verses Shakespeare would.

I do not wish to make outrageous parallels with classic visual directors such as Antonioni and Kar-Wai but Sally Potter's YES certainly offers something we don't get to see that often in our local theaters. The film blends together the audaciousness of a genuine theater play with the visual power of a timeless classic extremely well. Add to the mix an excellent group of actors that transforms YES into an intelligent modern tale of love and survival and you have a film that certainly should make your "most-wanted" list this month.

Sally Potter's YES is the winner of the Seattle Golden Space Neelde Award which was granted during the Seattle International Film Festival earlier this year.

Previews for other SONY releases-