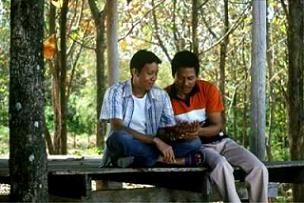 There is certainly a lot to be said about Apichatpong 'Joe' Weerasethakul's latest film Tropical Malady. Wrapped in a veil of mystery and plenty of controversy this bold new Thai film explores the passion between two male lovers reflected through the prism of an ancient mythical story about magic, love, and the dark side of the human soul. In addition, there is plenty in Tropical Malady that comes from the vaults of Thai folklore and the story which the film offers is indeed partially based on it.

Tropical Malady is structured as a two-part film and the story is often difficult to follow. During the first part we see Keng (Lomnoi) and his future lover Tong (Kaewbuadee) while they slowly come to realize that fate indeed has a plan for them. Keng is consistently pursuing Tong and the two soon fall for each other. The second part of Tropical Malady follows a soldier in his search of a mystical shaman who has the ability to transform into a white tiger.

I don't know how else to approach this review other than to say that Tropical Malady is a very difficult film to fully comprehend if for nothing else at least for its deep underlying messages which Western viewers unfamiliar with Thai folklore will most likely have a difficult time grasping instantaneously. The narrative offers anything but a straightforward plot where characters, images, and story are as transparent as what we are used to seeing in mainstream cinema. There is something special in the way the film is structured and a second viewing is highly recommended.

The strongest quality of Weerasethakul's film however is its striking visual power. Suffice to say that even if you don't fully comprehend what is happening on the screen the beautiful imagery which Tropical Malady offers will certainly keep your eyes glued to the screen. The slow camera, the commendable attention on detail, and the purely atmospheric soundtrack make this film an unusual cinematic experience. Tropical Malady certainly felt like a modern tale of passion and folklore that managed to play itself just beautifully even if at times the story took some unconventional for my taste turns. 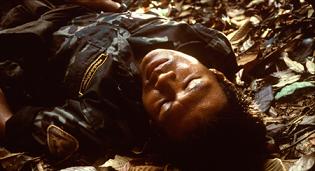 Winner of the Jury Prize at the Cannes Film Festival and nominated for the prestigious Palm d'Or (2004) Tropical Malady had a much bigger appeal overseas compared to the nearly arthouse-like treatment it received in North America. For a film this highly decorated I would assume that we would have at least gotten a chance to see it on more than a few screens (limited to major metropolitan areas only). Quite frankly Weerasethakul is a name that I have a feeling will soon be referred to with a great dose of respect. The director clearly knows what direction he wants to explore and more importantly he is not afraid of challenging the traditional status quo mainstream Thai cinema is often associated with. Furthermore Weerasethakul appears well versed in both Eastern and Western culture which tells me that his work is most likely going to reflect even more of the knowledge this unique film director has to offer. Educated at the prestigious Art Institute of Chicago and his native Thailand Weerasethakul clearly has the stars shining his way and judging by the enormous success which Tropical Malady generated in Europe I am convinced that we will soon be surprised with yet another beautiful picture.