Tales From the Crypt - The Complete Second Season


The Story So Far...
Produced by a dream team of Richard Donner, David Giler, Walter Hill, Joel Silver, and Richard Zemeckis, the "Tales from the Crypt" horror anthology series ran for seven seasons on HBO, inspired by the old EC comic books. Due to the comic's cult popularity, the creative freedom of the show and the high-powered production staff, the series was able to draw top-shelf talent to create the half-hour episodes, among which were some truly memorable stories.

Warner Brothers released the first season of the show on DVD in July of 2005. DVDTalk has a review of the set here. Before that, the only way to see the tales on DVD (besides the feature films that followed the series) was the three-episode Zemeckis collection released in September of 1999.

The Show
With the concept fleshed out well in the first season, the focus is completely on the stories in the second go-round. The creative staff certainly delivered, creating some of the best 20-minute tales the series ever saw. Calling on big names like Howard Deutch (Pretty in Pink), Arnold Schwarzenegger, Walter Hill (The Warriors), Frank Darabont (The Green Mile) and Richard Donner, the series pushed the envelope in terms of quality for an original cable series.

It wasn't just the writers and directors who turned out to make good TV, as a roster of stars joined in the fun, including Demi Moore, Kelly Preston, Lance Henriksen, Teri Hatcher, Carol Kane, Patricia Arquette and Don Rickles. There was just something about the freedom and quality that working on the series provided its cast. 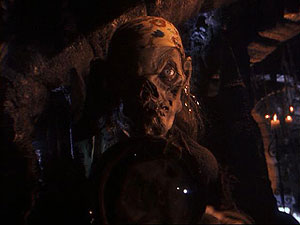 The all-star formula is certainly at work in what is probably the best episode of the season. Written by Darabont, and directed by Donner, "The Ventriloquist's Dummy" is an example of a near-perfect episode. Rickles and Bobcat Goldwait are excellent in this dark story of potential unfulfilled, which has a bit of all the best parts of the series, including humor, violence, and a disturbing twist at the end that makes sure a moral is clearly delivered. That's one of the best parts of the show. The evil are almost always punished, and no matter what the nature of their crime, the punishment is always capital or cruel and unusual.

Ironically, two of the highlight episodes this season deal with amputation, but in distinctly different ways. "Cutting Cards," which stars Henriksen, is a brilliantly twisted story about why they tell you to bet with your head, not over it. The ending features a visual that will stick with you for at least 15 years and likely much longer. Meanwhile, "Fitting Punishment" might be the cruelest to its innocent victim of any of the shows, but it also delivers in a big way, by engraining its ending in your frontal lobe. Sleep will not come easy, no matter how cheesy the climax becomes.

That's also the problem with "Television Terror," an example of how good the series could be, and its flaws as well. For most of the show's 21 minutes, it's a tense trip into a reportedly haunted house, with the late Morton Downey Jr. doing the Blair Witch thing 10 years before the film. But with a few minutes remaining, the show handed over the reins to the special effects crew, trading the unseen for the obvious, destroying the suspense of the episode. The reliance on shock and gore was the only disappointment for those who enjoyed the clever stories, but it was certainly a selling point for many fans. 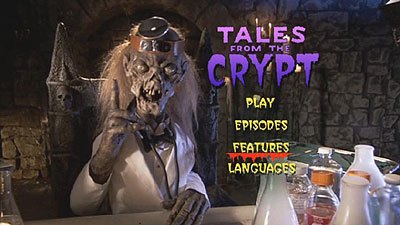 The DVDs
After getting just six episodes in the first season collection, this set is much more fulfilling, with triple the episodes. The 18 second-season episodes are spread over three DVDs, with six per disc. The discs are held in a five-panel digipak, that features a large photo of "Ghouls Playing Poker" under the three trays. The remaining panels have synopses, cast and crew information and airdates for each episode. The whole package comes in a nicely embossed slipcase.

Fans of the show will be saddened to know that the signature journey into the crypt, and the accompanying Danny Elfman music, which was available only at the start of the disc last time, is completely missing from these DVDs. The main menus and episode selection screens start with a new introduction by the Cryptkeeper, and go directly into his introduction on each episode. Whoever thought it a good idea to eliminate the intro entirely deserves a fate similar to any of the victims in these episodes. The anamorphic widescreen main menus features options to play all the episodes, select individual ones, view features and select languages. The episode selection menu is a text list of titles, while the language options include English, French and Spanish subtitles. Close captioning is also available.

The Quality
The full-screen transfers look pretty good overall, with nice color and detail. Surprisingly, they look rather crisp, without the softness you might expect for dark shows of their age. A few episodes have trouble with lines running through the image, while most have a bit of dirt and damage in the transfer...some worse than others. It's not horrendous, but you'll notice it, whether you're looking for it or not.

The Dolby Digital 2.0 audio track delivers an excellent presentation, with some nice enhancement of sound effects and music in the surrounds. It's not theater-quality, but considering the age of the source materials, it sounds very nice, and should pump up the scare factor in spots.

The Extras
The extras are shorter this time, with just two featurettes making up the whole bundle. "Shockumentary" is a letterboxed featurette that runs almost 14 minutes, covering the production of the second season of the show. Hosted by the Cryptkeeper, the piece looks at the show from all angles, including the influence of the comics, the talent involved and the creation of the Cryptkeeper himself.

Interviews with Joel Silver and the Cryptkeeper's voice, John Kassir, among several others, help present an interesting, though brief retrospective of the show. Kassir's presence in particular is fascinating, as it's an odd experience to hear that creepy, high-pitched voice emerge from this rather normal-looking guy.

The other extra is a quick look at the creation of an episode of SciFi.com's Seeing Ear Theater short-lived series of "Tales from the Crypt" episodes. Recorded live at the Museum of Television and Radio, with Tim Curry as the narrator, the audio play is interesting to see performed, but apparently not to listen to, as the series lasted just eight episodes. The featurette lasts less than three minutes. 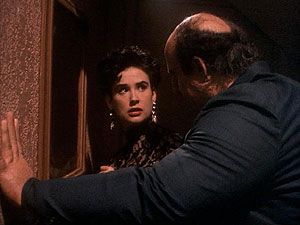 The Bottom Line
After establishing itself in the first season, "Tales from the Crypt" hit the big time in the second year, draw some big names and putting together some big episodes. Several of the series' most memorable moments happened in this season, along with the origin of the Cryptkeeper. The DVD does a nice job of presenting the episodes, despite the obvious age of some of the materials. The extras feel pretty light in comparison to what some series of similar popularity receive, but aren't just fluff either. Fans of the series will want to own these episodes, but between the lack of bonus material and the disappearance of the show's opening credits, there are at least a few reasons to hesitate. In the end though, the episodes are so strong that it will be hard for the "kiddies" out there to not pick this set up.