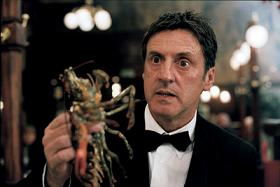 With an all-star cast that simply guarantees excellent results Apres Vous a.k.a After You, Pierre Salvadorri's latest film, certainly delivers what it aspires to-a good amount of laughs. With a collage of witty dialog, awkward situations that most definitely feel familiar to me, and a great, just great soundtrack this is a film that surely stands out among the sea of boring comedies that recently flooded the home video market. Apres Vous does not offer anything you have not seen before yet the film is full of fresh acting which transforms this modest little picture into a pleasant surprise.

Amongst all of the films I have seen I can hardly recall a specific performance where old charmer Daniel Auteuil has managed to disappoint me. His versatility as an actor who knows how to deliver a convincing performance once again proves that he is one of France's best, right next to Gerard Depardieu and Gerard Lanvin. He easily switches between serious roles which demand utter concentration (Cache) to exotic characters with an irresistible charisma (Recontre avec le Dragon a.k.a The Red Dragon) to some well, more edgy roles such as his infamous reincarnation as Marquis de Sade (Sade). In Apres Vous which is nothing more than a bubbly little comedy with an exotic flavor he indeed shines once again proving that actors with his talent are nowadays a rare commodity.

The supporting cast in Apres Vous is also quite impressive. Jose Garcia who Claire Denis invited for her scandalous project Trouble Every Day (2001) about a human carnivore on the loose plays the role of a loser to perfection. His off-beat behavior, erratic actions, and of course consistent thoughts about committing a suicide really elevate Apres Vous a notch higher among your typical comedies which Hollywood mass-produces with an impressive brilliance. And then we have the extremely talented Sandrine Kiberlain which Claude Miller fell in love with in his thought-provoking project Betty Fisher et autres histories a.k.a Alias Betty (2001). As you could see the core of Apres Vous indeed boasts some impressive talent which surely fueled my desire to see this film. And I was not disappointed.

With all of this said this is not a film that would change your perspective about contemporary French cinema nor it is likely to create an Oscar buzz among film afficionados with a taste for quality European cinema. But for what Apres Vous aspires to deliver, a few laughs which hopefully you and your company will share together, this is indeed quite a gem. There are plenty of interesting "twists" which after the end credits roll you are likely to dismiss with "o, well, I saw this one coming" but will still make you feel good. After all who could resist a film where there is plenty of good food, exotic French wines, a spectacular music score, and of course a cast ready to tickle your senses…certainly not me.