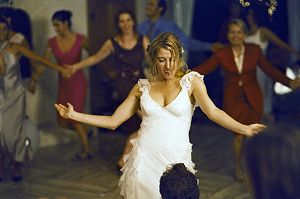 Structured somewhat similarly to Memento and its reversed way of storytelling Francois Ozon's 5 x 2 (Five Times Two) follows the brittle relationship between Marion (Valeria Bruni-Tedeschi) and Gilles (Stephane Freiss). This is indeed a film that takes us back to what Ozon became known for- his unparalleled ability to dissect human relationships where things are not as simple as they appear. 5 x 2 is structured as a collage of five scenes where we witness the genesis of a union which right from the beginning we are told is doomed. There is hardly any surprise in the manner in which the storyline is built, from the opening scene all the way through the finale the outcome of the love relationship between Marion and Gilles is well known.

5 x 2 begins with a plain yet very convincing scene where we see a lawyer explaining the details of a divorce settlement between Marion and Gilles. Shortly after they sign the accord the couple exits the lawyer's office, heads to a nearby hotel, and succumbs to an intense and passionate sex. There is barely any dialog between the two protagonists, the little which they share hardly provides any "logical" explanation for their actions and not until later in the film do we realize that there have been additional motives that "justify" their deeds.

As the film progresses we are introduced to the circumstances that eventually will lead to the collapse of Marion and Gilles' union. We first see them encounter each other during a vacation trip where Gilles shares a room with his soon-to-be wife. Slowly yet very convincingly Ozon follows the demise of a relationship and the birth of a new one which will eventually suffer a familiar fate. The camera pursues the romantic build-up between Marion and Gilles and from that point on all the way through the end of 5 x 2 similar to a puzzle we are allowed to add up small pieces to a story which we know will end tragically.

5 x 2 in my opinion is clearly a film that bears a heavy resemblance with the manner in which theater plays are constructed. Each major fragment of the film, or scene, is perfectly assembled as to address a specific aspect of the relationship between Marion and Gilles. Quite frankly this is the very reason why Ozon manages to present a convincing story-although we are told what the outcome of the union between the two protagonists is we do not know what the circumstances that lead to it are. Ozon does a wonderful job in revealing only enough of the details surrounding Marion and Gilles' divorce so that we can continue to follow the story with interest.

Yes, this is indeed a film where huge gaps are being left to be filled with information and while for some features this could be regarded as a negative occurrence for Ozon it is an excellent way to manipulate an otherwise predictable story. The result is an unusual, often inviting interpretation film where two emotionally rich characters are being followed by the camera of a filmmaker with an agenda. In addition, the beautiful and expressive look of 5 x 2 truly puts the entire story between some of the better examples of doomed relationships shot on film.

Deleted scenes -(selected deleted scenes that bring additional insight look on the relationship between Marion and Gilles. Quite frankly I think that Ozon was correct about not having them incorporated into the film as they provide very little to enhance the story.

The Making of 5 x 2- Auditions- a collage of scenes showing the actual auditions for the film where the actors present their lines.

Lighting Tests- I truly enjoyed this piece of extra material as somehow it brought out more of the stunning visual power of Ozon's film. Be warned- it is a very short one!

Gallery of trailers for other ThinkFilm releases-