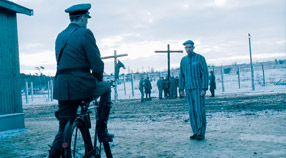 The Ninth Day (Der Neunte Tag) tells the story of Father Henri Kremer (Ulrich Mattes- Der Untergang/Downfall), a Luxembourg priest thrown into the well of souls-Dachau. Together with a group of catholic priests from all over Luxembourg, Belgium, and Holland Father Henri is awaiting the fate which the Nazis have chosen for him and everyone else unwilling to recognize the new regime-death. Miraculously, Father Henri is granted nine days during which he must return back to Luxembourg, bury his deceased mother, convince Joseph Philippe, the bishop of Luxembourg, also known as "The Silent One" to embrace the new order, and report back to Dachau. Can Father Henri manage to save the lives of his brothers in Dachau, convince the bishop of Luxembourg to reconsider his stance, and remain true to his fate?

A film that simply defies any categorization you might want to consider Der Neunte Tag has spurred some very extreme reactions throughout Europe and as it appears now in North America as well due to its brave involvement with a subject that to say the least is deemed rather sensitive-the official policy of the Catholic Church during the WWII and its treatment of the Nazi regime. Based on the book by Father Jean Bernard which follows his ordeal in Dachau and his journey back to Luxembourg Der Naunte Tag explores simultaneously two different subject matters. The first one follows the personal struggle of Father Henri to survive his captors and has a more restrained and in my opinion personal feel. The second one tackles a much broader issue which as history tells us has spurred countless opinions regarding what would have been the most appropriate course of action for the Vatican with the heart of Europe conquered by the Nazis.

Acclaimed director Volker Schlondorff (The Tin Drum) certainly shows a great deal of respect to Father Bernard's work as the story remains largely truthful to what the book describes. Der Naunte Tag captures perfectly a man's struggle to remain true to his fate in a time when godless deeds are being done. From the graphic tortures in Dachau to which the viewer is exposed to the subtle address of the Vatican's "silence" Der Naunte Tag is withtout a doubt a film of engrossing visual power.

Many have tagged Der Naunte Tag a "shameless Catholic propaganda"; many have also described this film as one of the more honest depictions of a time when "faith" was a vain word. I happen to share the latter description. I am unsure how the personal journey of a man who during the course of this story begins to question his own fate in God can diminish the powerful message which Volker Schlondorff's film delivers. Morality, the ability to endure the unthinkable, the power to remain truthful to your fate, these are all aspects of Der Naunte Tag which Schlondorff dissects with immaculate precision.

I fail to see how Der Naunte Tag is a badly structured excuse or propaganda of some sort as some are eager to claim. If anything this is a film that asks some serious questions. Towards the middle of Der Naunte Tag Father Henri asks the bishop of Luxembourg to address the Nazi occupation of his country. In return the bishop responds "Do you know what happened in the Netherlands?" (after a letter of protest signed by Dutch priests more than 40,000 of them were exterminated by the Nazis). Consider what would have an official letter of disapproval from the Pope instigated…another genocide as fierce as the one Stalin unleashed upon religious leaders in the former Soviet Union?

I am far from oversimplifying the message which Der Naunte Tag delivers by describing it as "propaganda". Doing so would be unfair to those involved with this project. I also do not think that the film, and even more so its director, need to address any such claims as they are ridiculous and in my opinion disrespectful to those who vanished in the concentration camps. This is a much more complex film that is meant for those that can see beyond a literary "reality" and consider what human suffering can cause to your fate…regardless of your religion.

I find it difficult to analyze films that deal with part of our history that is as charged with emotions, most of them negative, as the WWII. Furthermore, it seems like very few films manage to perfectly capture that subtle element of believability (Der Untergang is a perfect example) that would truly separate the amateurish work from that worth seeing. Der Naunte Tag is a pleasant exception…every little bit of it is charged with so much emotion and controversy that they truly transform it into a cinematic experience unlike any other.

I don't quite know what would take for Kino to begin flagging their transfers properly and drop the dreaded PAL ports once and for all!!! They have some great films in their catalog but presentations such as this one which shows that a beautiful print is indeed available only leads me to believe that someone in Kino is simply not interested in making that extra bit of effort and delivering a quality to their releases that consumers obviously at least to me expect.