Filling the gap somewhere between power metal, crossover-hardcore, and nu-trash metal, Machine Head are certainly a band that has a lot going for them. With a surprisingly large European fan base (especially Scandinavia) this powerful outfit has evolved into quite the monster since their debut album Burn My Eyes (1994). Promoted by old friends Roadrunner Records for a long time Machine Head was in the shadow of their much more prominent Brazilian counterparts Sepultura. In fact, at least in Europe, Machine Head drew comparisons with the less heavy and more hardcore in my opinion Biohazard, the more industrial-oriented Swedish warriors Meshuggah, and of course as already mentioned above the classic Brazilian trashers Sepultura. A lot has changed since 1994, with a much larger fan base, solid gigs at UK's Donnington Park, and of course the support and exposure which Machine Head enjoyed through Ozzfest the Oakland California-bred group are now stars on their own.

I always found it strange how much more popular these guys were overseas compared to the status they enjoyed in North America. In Holland, England, Scandinavia, even as far East as Greece and Russia Machine Head always had thousands of dedicated fans that would line up for tickets the minute a show was announced. In the United States with exception of die-hard rock radio stations (and No not the ones that would play your father's favorite Rush and Journey) Machine Head was always in the shadow of the bigger, more "serious", and let's just say it heavily-promoted Christian bands (I am sure you have heard about Creed). This was the sound of "heavy rock" respectable radio stations were concerned with. Times are different now I suppose…as with the enormous success of Roadrunner Records' leading acts Slipknot and Nickelback and their shameless promotion by MTV (money is money after all) looks like Machine Head will finally get the much deserved exposure. After all many of the new kids on the block such as Slipknot, Ill Nino, and Coal Chamber have much to thank their older peers.

This new and exciting DVD offers some great material for die-hard Machine Head fans. Comprised of life concert footage from the Brixton Academy in London (2004) where 5000 fans were screaming their hearts out, 3 music videos, and 3 short Making-Of featurettes, as well as "The Making of an Album"-featurette, Machine Head-Elegies is the long-awaited tribute to a band which to the delight of its fans seems to have risen from the ashes. With a familiar line-up: Rob Flynn - Vocals and Guitar, Phil Demmel – Guitars, Adam Duce – Bass, Dave McLain – Drums which willingly discusses the hard times the band went through, the traditional strong support Europe provided, and a disturbing lack of confidence from their native Roadrunner Records-USA this DVD set is an absolute must-buy if you consider yourself a true supported of the Raiders! 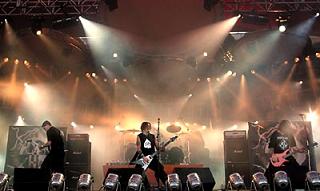 5. "Life on the Road" Clip of touring

10. In the Presense of my Enemies

12. Descend the Shades of Night

*(As mentioned above each video includes a Making-Of Featurette).

Presented in an aspect ratio of 1.33:1 this DVD set looks gorgeous. Excellent image (even during the live performances), well-rendered colors, and lack of disturbing digital imperfections Elegies is indeed one spectacular package of a DVD.

Perhaps the only area where this DVD lacks substantially is the audio presentation. For some strange reason (could this be another Roadrunner Records-USA flop?) what you get here is a standard 2.0 mix. Why? With the awesome and absolutely amazing life footage together with the added videos we should have gotten a thunderous DTS track. What happened??

I was watching the documentary mentioned above and could not stop thinking about how underrated this band is in their native land. Judging by the voices of Rob, Phil, Adam and Dave and the stories they shared Machine Head were indeed quite a bit saddened by the fact that Roadrunner Records-USA came second long after Roadrunner-International had signed the band. Well, not a surprise as far as I am concerned…seeing the hordes of fans in Europe and the way they have greeted the band's new album (Machine Head are once again on the top of heavy-metal charts around the Old Continent) I think that the band's heart indeed lies somewhere else. Too bad…as these guys are one honest bunch of musicians that simply want to play good music…and they should definitely be on US radio stations. RECOMMENDED!