POPcinema // Unrated // December 13, 2005
List Price: $14.99 [Buy now and save at Amazon]
Review by Bill Gibron | posted November 28, 2005 | E-mail the Author
The Product:
Something Weird Video has been doing it for years. Along with their usual treasure trove of time honored exploitation classics, the company has larded their DVD releases with bonus features focused on the old nudie loops of the 40s thru 70s. These strip showcases were part of the standard operating procedure for most storefront adult bookstores during the era. With the company's genre success has come copycats. Retro Seduction Cinema now wants to join the ranks of the ribald with this initial outing of nudie loops - peep show product from the once sinful streets of NYC. As with most product from the past, we learn more about the era than the erotic. 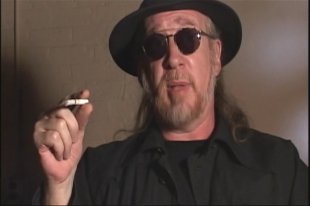 This DVD is made up of a brief introduction by noted grindhouse scholar 42nd Street Pete, followed by a dozen ditzy, glitzy snapshots of the 1960s sex industry. These loops - averaging about eight to ten minutes per segment - feature femmes of questionable looks and even more miserable lustfulness gyrating and genuflecting in a series of salacious proto-porn pose downs. Blouses and bras come off very easily and breasts of a natural, non-buoyant quality suddenly fill the screen. So does pubis. Indeed, one of the striking aspects of these mini-movies is the concentration on the vagina, both in and out of panties. As the timeline of this DVD progresses (early censorship laws didn't allow full frontal views) you start to see exposed hair, followed rather quickly by minor fondling. There are no gynecological-like moments, no times when the "fleshier" facets of the female nether regions are exposed, but we still see a lot of hirsute honey in this crazy carnal collection. Seduction Cinema has even named the 12 films here (they usually had generic, interchangeable titles when they played the peep circuit). Some are suggestive, while others hint at salaciousness that never arrives. In order, they are:

The DVD:
Campy, crude and slightly rude, the big difference between Retro Seduction Cinema's release of this collection of nudie loops and the work of Something Weird Video is all in the tone. SWV, long the leader in this domain, understands that most 'regular' people haven't been privy to the harder, more homely version of the grindhouse gang, and they try to keep their digital displays of this kind of material on the far more safe, soft and sensual side. Sure, they have lots of these gritty, grimy pieces lying about their Washington state warehouse, and you can buy compilation presentations containing untold hours of hygiene-free females exposing all sorts of occlusions. In general though, the Something Weird women appear innocent, carefree and, for the most part, fairly wholesome. The Retro Seduction sweethearts, on the other hand, would give dive district bar maids a real run for their repugnance. 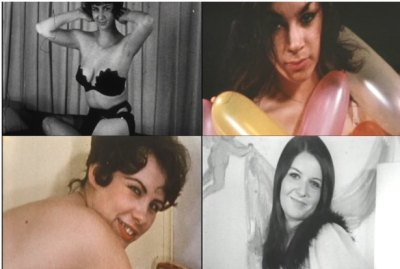 There is no balancing act here. No amount of natural, un-enhanced cleavage can countermand the absolutely unsightly elements we have to battle during this disc. Remember, this is the adult industry circa 1960-69, when things like waxing, shaving, grooming, plucking, trimming, clipping and skin bleaching were as foreign a concept as video, the computer and industry-regulated STD testing. If you like your gals in full follicle mode, you'll be enraptured by the amount of femme fur you'll see on this disc. By around 1966, the taboo against showing pubic hair was almost completely gone. During later shorts like "Caress My Body" and "Susan's Sensual Tan Lines", there is more time spent on the triangle toupee than on the typical teat skin sacks. Legs and ass get short shrift as more and more mons makes it onto the screen. By the end, we are approaching the near revelation of labial lips, one of the still forbidden features that would help the industry turn the hard-corner in the mid-70s. 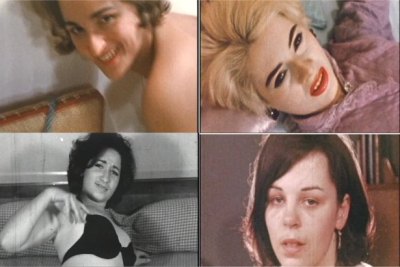 In addition, these loops are a lot like the pornography of today. Once you've seen a couple copulate in reverse cowgirl mode, the constant repetition of said act grows tiresome. Similarly, once you've seen a sloppy, slovenly skid row stripper drop her undies for the sake of a camera, you've seen them all. There is a kind of depressing drabness to these "models", the desperation of what they would do for money written all over their incredibly bad, almost always flabby skin. One of the reasons modern hardcore material is so captivating to most men is that it walks a strange, surreal tightrope. The gals are obviously being exploited, but they appear proud and empowered because of it. Back in the 60s, however, this was true use and abuse of available - and dire - dames. Many of these women appear less than pleased to be on camera, their inner turmoil easily misinterpreted as a kind of craven "come hither" allure. 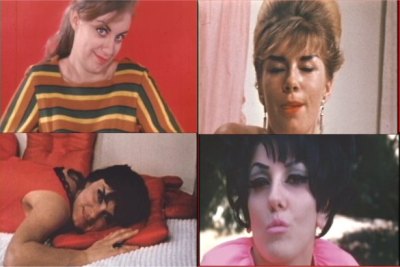 So if you can get past the Neanderthal cavewoman wonders of these ladies' loins, if the sour gin-soaked atmosphere of quick money and loose morals doesn't phase you one iota, then it's time to belly up to the bare bodkin boudoir and relish the view of pre-plastic surgery-ed skin in all its zany zaftig glory. You'll find no underfed supermodels here, no worried-about-their-waistline waifs clogging up the screen with their skeletal skankiness. This is a rarified peek at what got dad and granddad all hot and bothered. It's a dopey, drab delight that offers some indirect social insight into the times in which it was created. At several moments throughout this DVD, as balloons suggestively slink along crotch areas, as stubby-fingered hands manipulate mammaries, you're shocked at how far the flesh film industry has come in just a scant four decades. These gals may not have been the height of fashion, but they represented sex just as readily as the barely legal teenage runaways who fill up volume after volume of vice at your local adult video store.

The Video:
Oddly enough, Naughty Nudes of the 1960s is offered in an anamorphic widescreen presentation (around 1.66:1) that is filled with defects and dirt. Scratches are plentiful and editing errors are abundant. But this is part of the fun of such a feature. It gives a real level of authenticity to the presentation, almost replicating the Time Square sleaze of the original viewing experience. Certainly those who dig the digital domain because of its pristine parameters will be PO-ed, but anyone who understands the ambience of the old grindhouse will actually prefer the problematic visuals here. The introduction is clean and crisp, and overall, the colors are correct and the contrasts are fine.

The Audio:
Retro Seduction Cinema makes the odd choice of including newly recorded soundtracks for each one of these shorts (they were almost always shown without sound) and, in addition, they include the rather odd element of projector noise over each and every offering. While the camera cacophony is an attempt to replicate the peep show scenario, the music made for this DVD is almost antithetical to the scenes shown. Groups with names like The Pink Delicates and The Ubangis don't attempt to replicate the garage rock bump and grind that is most closely associated with the skin industry. Instead, their sonics, along with those of Ron Arkins, have a kind of electronica drone tone to them, with muffled guitars growling in the background as a bland beat pounds away. No real sizzle or heat, just dirge-like musings that add almost nothing to the experience. While it's nice that the company went to these lengths, it's too bad the musicians didn't follow the auditory aspects of the era more closely. 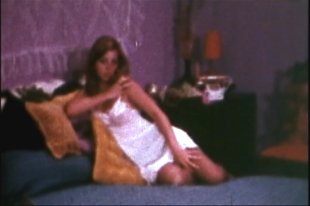 In another bizarre move, seven more shorts make up this DVD's sole added content (aside from 12 trailers featuring the films of Joe Sarno, exclusively). Aside from seeing Rene Bond in a badly out of focus bump and grind ("Rene's Sexy Striptease"), there is nothing really complimentary or contextual here. Along with Ms. Bond, we get "Thigh High Garter", "Mega Beehive Super Doo", "Bouncin' Boobs", "Red Head Beehive", "The Stewardess", and "Trailer Park Sex". Aside from the two hair-don't disasters that make up the pair of B-52 bonanzas, and a really bizarre look at the life of an airline hostess (it has a real found in a cellar snuff film feel) there is nothing here that matches the tainted tone of the original shorts. Indeed, it looks like these ladies lost the digital beauty pageant, relegated to the back pages of this DVD offering. And for those who'd like more information on the glamor gals featured here, 42nd Street Pete has authored a wonderful insert that describes each loop. Cool. 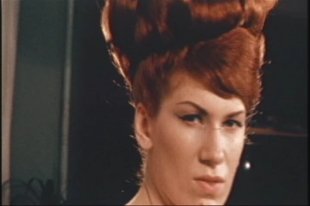 Naughty Nudes of the 1960s is Recommended for a lot of reasons, none having to do with titillation, arousal or physical perfection. At a certain point in their education, any real film fan needs to stop and look along the outskirts of the medium to see where the real influences on the artform came from. People can point to foreign films and their far more free attitudes toward sex and nudity and claim they caused the turnaround in Hollywood's handling of the subject. But the truth is a lot seedier. It was the exploitation business that bought into the showing of skin - Swedish, French or home grown American - and carved out a niche for such naked novelties. Loops such as these went a long way to influencing the public's proclivity toward erotica, and before hardcore hindered the industry, offerings of this nature made the case for openness and realism. So don't go into this DVD hoping for some video Viagra. Instead, view it for what it is - a way of understanding the big, bawdy picture about sex in the cinema. It is a very engaging journey while it lasts.