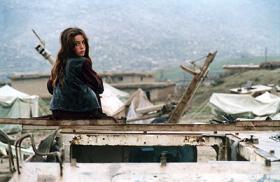 Written and superbly directed by Bahman Ghobadi Turtles Can Fly follows the story of a group of children nestled in a village somewhere on the outskirts of unrecognized Kurdistan. Living a life that would be more suitable for a nomad tribe, literally forgotten by time, Soran (Soran Ebrahim) and his posse of underage boys are awaiting the arrival of the Americans. Rumor is…the Americans have overthrown Saddam's regime and are now on their way to the village where Soran, or Satellite as the locals refer to him, is trying to make ends meet by selling deactivated mines. In an attempt to meet the growing demand for updates on the war Soran will help the village obtain a brand new satellite dish which as it appears allows access to plenty of the so-called "forbidden channels". Fascinated by the English language and impatiently awaiting the arrival of the Americans Soran will often deliver the news ...eventhough he barely understands what President Bush is announcing through the tiny TV screen.

Instead of a detailed synopsis for Turtles Can Fly I have decided to offer as little as possible, in fact I provided only a tiny bit of the narrative, with the intention of giving you the chance to experience a film that in my opinion should be a required viewing for anyone questioning whether or not the "war on terror" is a success. I don't believe that there is any other way I could have approached this film without being accused of glorifying a "political propaganda" meant to deliver an unrealistic look at the current situation in Iraq. Suffice to say that after viewing this film you will most certainly have an opinion as to whether or not what we are doing in the region has provided the needed results. That is all I have to say regarding the political baggage of this film.

With this said Turtles Can Fly indeed left me deeply disturbed. Not because I did not know what to expect from it (or maybe I did not know) but because I was completely unprepared to be so profoundly moved by such a simple film. I have seen Bahman Ghobadi's A Time for Drunken Horses (2000) and knew how talented the director is but after seeing Turtles Can Fly I am simply amazed how anyone with a clear head can describe it as propaganda. Obviously, the film made certain people feel very, very uncomfortable.

For a long time I thought about what to write in this review, how to describe Turtles Can Fly, and say as little as possible. Not because I am not willing to talk about it, trust me there is a sea of emotions in me, but because I hope that when you see this film you will be as unprepared for the visual shock Turtles Can Fly offers as I was. I shiver at the thought that somewhere somehow someone thought that this was a political film. Claims that Turtles Can Fly lacks nuanced and coherent narrative make me shake my head in disbelief…after all what nuances are we looking for in a feature that shows a boy with severed arms deactivating a mine with his teeth?

Presented in its original aspect ratio of 1.85:1 and enhanced for widescreen TV's Turtles Can Fly looks great. Steady colors (some of the hazy vistas are intentional), great contrast, and excellent print which hardly suffers from any disruptive damage. Seeing the WB's logo on the back of this Canadian release by Seville makes me think that the picture quality is identical with the US R1 release. Indeed, this is one beautifully looking film.

Presented with a 5.1 Kurdish dialect and optional English and French subtitles I have absolutely no reservations with the audio presentation. Crisp, clean, and often piercing audio quality make this an easy sound evaluation-just great.

If there ever was a film that should have been granted a massive 3DVD set full of extras this must have been it. To be honest with you I don't know what to think here…is it intentional that there isn't a single piece of extra on this set? Did Seville listen to their US colleagues MGM and copied their bare-bones release intentionally? It bothers me quite a bit that one of the most powerful films I saw this year does not offer even a theatrical trailer. One must wonder what would have happened if Criterion were to unleash their version of this magnificent film…or MK2!!

One of the most remarkable films I have seen in recent years Turtles Can Fly transports its viewers in a world that many have chosen not to discuss for fear of being tagged "unpatriotic". There is just too much in this film that is likely to enrage those who think that intentional political statements are being hidden underneath. As far as I am concerned Turtles Can Fly is a film about tragedy…the kind which words and 60 Seconds specials can not describe. HIGHLY-RECOMMENDED!!