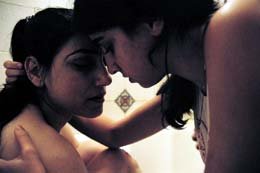 Or (Dana Ivgy) works in a nearby restaurant where she washes dishes and takes care of the garbage. She is trying to help her mother Ruthie (Ronit Elkabetz) to get back on her feet after twenty years of prostitution. But Or is slowly losing control over Ruthie's inexorable forays into the old habit. Day after day Or begins to realize that in order to have a decent life she would have to distance herself from her own mother.

Bold, visually striking, and deeply disturbing Keren Yedaya's award winning picture Mon Tresor a.k.a Or (My Treasure) is a chilling exploration of two people unable to control the course of fate. This is also a very quiet film where there is no background music, there are no abrupt camera moves, and there are hardly any beautiful vistas to soothe the bruising punch Or delivers. Everything in it is meant to create an enormously powerful sense of disgust that won't let you go until the final credits roll.

Shot in the Holy Land this is anything but a holy film. In fact Or is full of explicit nudity, female abuse, and plenty of human degradation that will certainly leave a bitter taste in your mouth. Or is also a film revealing a very discomforting side of Israel where drunks are sleeping around garbage pick-up stops, prostitutes are working the darkly lit streets, and men are generally being shown as careless female abusers. To put it rather mildly Or reveals an Israel very different from the country you are likely to see in the glossy brochures at your local travel agent.

Or is the second Israeli film I saw this year (after the Oscar-entry Campfire) that delivers an extremely harsh criticism at the manner in which women are being treated in Israel. In both films I noticed a sense of desperation, an alarming message, meant to expose a society where female abuse seems to be largely tolerated. Or however goes a step further from Campfire. Karen Yedaya has created a film where we see the main protagonists as "social outcasts" yet they feel quite normal. These are not morally degraded people; they have not given up on life. On the contrary, it seems like life has given up on them. Both Or and Ruthie struggle to live a decent life not because they lack the desire to rebuild their lives but because the society they belong to constantly flushes them back on the streets.

Similar to Lukas Moodysson's A Hole in My Heart (2004) Or tiptoes on the edge of being dangerously suffocating. The sobering look at female abuse in Israel is not only disturbing it is indeed shocking. Judging by the reactions Or has generated in Europe and Israel it seems like many, I would assume men, felt quite uncomfortable with what Karen Yedaya's camera shows. There have been sporadic calls of criticism claiming that the film is more exploitative than revealing. And I would not have expected anything less! Such reactions show to me that Or has pinched a few nerves and has delivered a message exactly where it is needed…amongst those who benefit from vulnerable women and hide behind empty moral slogans.

Or (My Treasure) is the winner of the Camera d'Or Award (for Best First Film-Keren Yedaya), the SACD Screening Award, the Young Critics Award, and the Critics Week Grand Prize at the Cannes Film Festival (2004); The Grand Prix Award at the Bratislava International Film Festival (2004); European Discovery of the Year at the European Film Awards (2004); and winner of the Best Actress Award (Dana Igvy) granted by the Israeli Film Academy (2004).

There is a bit of a controversy with this upcoming DVD release. As it appears the original aspect ratio of Or is 1.66:1 and looking at the back cover of the DVD I see an aspect ratio of 1.85:1. When I popped the DVD in my player the aspect ratio in which this film is presented is neither 1.66:1 nor it is 1.85:1. The film is framed slightly wider than 1.85:1 yet it is nowhere close to 1.66:1. With this said the image does appear to be enhanced for widescreen TV's and generally speaking it is quite pleasant to view on a standard tube-contrast is largely well handled, there is no print damage, tone colors are steady, and saturation level tolerable. The problem once again stems from the fact that this is a PAL sourced print which I am fairly certain has a lot to do with the French master. Why this release however is not in the same aspect ratio as the French disc (the original aspect ratio of 1.66:1) is a mystery to me. For some the difference between 1.66:1 and 1.85:1 may not be an issue but clearly it is unacceptable as some cropping will be visible for those with a more sensitive eye.

Presented with a Hebrew 2.0 track the audio quality is indeed very, very good. There is no music score in this film and the dialog is clean and crisp. I have absolutely no reservations as far as the sound presentation is concerned whatsoever. With optional English subtitles.

The only extras provided for this release are a few trailers for upcoming Kino release and a "Making-of" in Hebrew with optional English subtitles.

I applaud Karen Yedaya for her courage to step up and deliver such a brave and uncompromising debut feature. I certainly hope that many will take a very, very serious look at what Or reveals and consider the manner in which Israeli women are being treated. As to Kino's presentation…I have said it before and I will say it again: there are people in the company that clearly know what quality cinema constitutes and more importantly they have a clear vision as to where World Cinema is heading. So, what will it take for Kino to finally start converting their masters properly? If they were to avoid the dreaded PAL-NTSC transfers I would certainly embrace them as one of the more serious players on the DVD market. Until then foreign film aficionados will have to rely on their region-free players. RECOMMENDED.