A few years ago, David Lynch made available for sale only on his website a beautifully restored version of his cult classic, Eraserhead on DVD. The transfer went through a serious restoration courtesy of Mr. Lynch himself, and the results were fantastic. So was the price. It was an expensive release made even more expensive by the additional shipping costs required to accommodate the unusual boxed packaging that the disc was housed in. Members of Lynch's website picked it up as did a fair amount of other die hard fans, but the general public had to more or less make due without it until now. The film and the supplements that adorned that earlier restored release have been ported over to this standard edition that is now available at regular retail outlets in a normal keepcase and at a lower price thanks to distribution from Subversive Cinema. 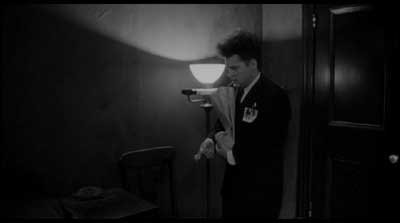 For those of you who haven't seen the film - what is it all about? Well, that's not as easy to explain as you might think. On the surface, it tells the story of a quiet man named Henry Spencer (the late Jack Nance) who lives in a run down industrial city filled with smokestacks and factories. It's a gloomy town, and he lives in an even gloomier apartment with his girlfriend, Mary X (Charlotte Stewart). When Mary gets pregnant and subsequently gives birth to their child, his world is turned completely upside down as it proves to be nearly impossible to keep the child, if you can call it that, quiet. There's something very wrong with the baby – it's not human, or is it? It's definitely very alien like in appearance.

At any rate, the only solace Henry has in his life is watching the woman in the radiator. At certain times, Henry is able to see into the radiator where a strange but sweet woman sings on a stage in a nightclub about heaven, where everything is fine. Strange creatures that look like sperm drop from the ceiling above her onto the stage as she performs her sweet song. As Henry's world becomes more and more claustrophobic, things only get worse as Mary's parents are introduced to the picture, making the beautiful girl who lives across the hall (Judith Anna Roberts) look more appealing by the minute if for no other reason than she represents to him a possible escape from the nightmare that his life has become. 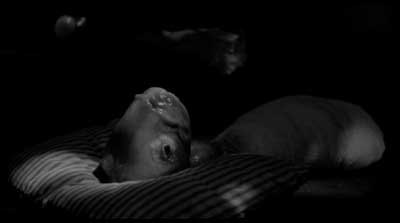 There's a whole lot more to it than that. Interpretations differ from viewer to viewer and coming up with your own take on what the movie means is half the fun. A half a dozen or so viewings of the film and this reviewer still isn't entirely sure it all makes sense but that doesn't in the least diminish the power and the raw, horrible beauty of the movie. It's a truly captivating film; one that once you start you can't really stop watching. Lynch has never gone on record and explained what the film really means, wisely opting to let audiences make up their own minds and find their own take on the film.

A few set pieces within the movie really stand out to the point that they've become almost famous. Every time that the 'baby' is on screen the movie is repulsive, which is odd considering that in almost every other film a baby is a happy thing. The scene where Henry, Mary and Mary's parents sit down to eat their chicken also stands out thanks to some completely grotesque results. When Mary X feeds their newborn, things get eerie once again. It's impossible to forget the song in the radiator, and the ending where Henry's head is surrounded by floating debris (the cover art shot) has adorned many a t-shirt and college dorm room poster over the last two decades. 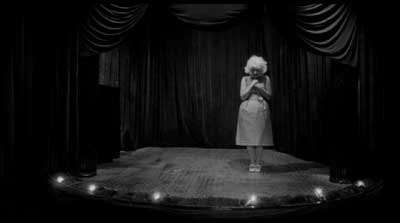 One of the most impressive aspects of the film is the sound design. The audible portion of this film plays out like the city that it's set in – it's loud and abrasive at times and it hurts. It works a little too well in spots, it can really get under one's skin. The cinematography is fantastic from start to finish. Each shot is set up wonderfully and while this is an incredibly dark film, it is still very impressive on a visual level and time has been very kind to the movie in that regard.

Jack Nance is perfect in the lead role. He brings a strange screen presence to the film and is instantly recognizable in the part thanks in no small part to his giant puffy hair and stark eyes. The breakdown that his character goes through, what with the responsibilities of being a new father and all of the pressure that those duties obviously entail, isn't so much believable here as it is inevitable and Nance does a very fine job of parlaying that confusion and that repressed anger in his performance.


The 1.85.1 anamorphic widescreen transfer was taken from a newly cleaned up high definition master that Lynch supervised himself and the film was cleaned up frame by frame. The results? Outstanding. Everything is perfect as far as the video is concerned on this release. Contrast is set exactly where it should be, print damage has been all but completely eliminated and there's an insane amount of both foreground and background detail present in the image. There are almost no problems at all with mpeg compression artifacts (I say almost because one or two scenes do exhibit some really mild artifacts but that's it, really) even with the high amount of black spots in the compositions, and edge enhancement and aliasing problems are never worth complaining about at all. There is some moderate film grain present, but that's the way it should be. Eraserhead has probably never looked better than it has on this DVD and considering it was shot over five years in the mid seventies for a hundred thousand dollars on 16mm film stock, it looks damn good. On a completely anal retentive note, though the feature is properly flagged for progressive scan playback, the extra features are not, nor are they anamorphic. 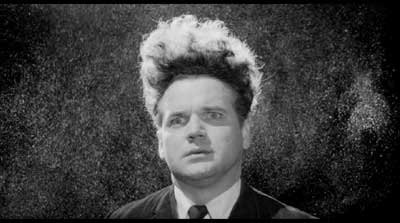