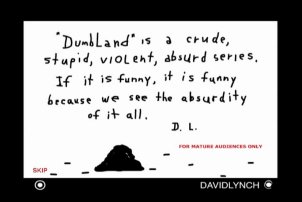 When David Lynch opened his official website some years back (and asked members to pay a monthly fee to partake of all its online wonders) the one thing the auteur promised was original content. As time went by, he delivered the delightfully surreal series Rabbits, about a group of bummed-out bunnies living in a strange post-apocalyptic space. His other main offering was Dumbland, another dip into Lynch's oddball sense of humor. Not unlike the weird wit of his only foray into television comedy, the short-lived On The Air, Dumbland derived a great deal of its laughs from this artist's alien perspective. Now it's available on DVD, and if you can dial into his dementia, you may find yourself giggling as well as gagging. 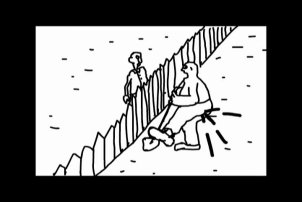 Dumbland centers around a loud, abrasive family unit living in the middle of a mindless suburban nightmare. Wife is the animated equivalent of an Edvard Munk painting, while baby Sparky is a blob-like adolescent zygote with ADD. Randy the dad is a domineering pig with a frighteningly foul mouth, a flatulent ass and a titanic, nuclear temper. He has a friend who likes to hunt and kill, and repugnant relatives including a humongous heifer Mother-in-Law and the terminally ill Uncle Bob. There are eight adventures on this single DVD, each one running about four and a half minutes. In total, there is just over a half hour of Dumbland mayhem. Here are the titles, and a short plot description, of each installment:

"The Neighbor" - Randy admires his neighbor's shed.
"The Treadmill" - It's a battle between Randy and a treadmill for mechanized superiority.
"The Doctor" - After being nearly electrocuted, Randy gets a visit from the doctor.
"A Friend Visits" - Randy and his pal reminiscence about killing things.
"Get the Stick" - A man with a stick stuck in his mouth gets Sparky and Randy's attention.
"My Teeth are Bleeding" - It's a typically demented day in the Dumbland family's lives.
"Uncle Bob" - While Wife and Mother-in-Law go shopping, Randy and Sparky are put in charge of watching their ill Uncle.
"Ants" - Randy battles bugs - and the insects win. 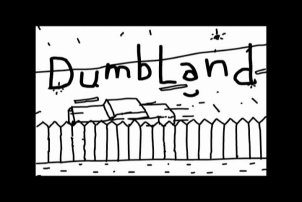 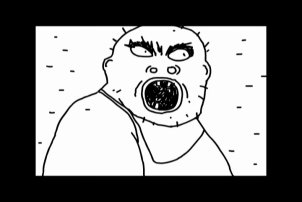 Loud, crude and certifiably insane, David Lynch's Dumbland represents perhaps the steepest steps into the strange ever taken by this notoriously nutty auteur. Lynch's films are always profoundly odd, dealing directly with nightmare and dream imagery to make their enigmatic points about the human condition. Even his occasional comedies (On the Air, the infamous short The Cowboy and the Frenchman) find their humor in the most unusual, mannered ways. Lynch is convinced that comedy derives from the three "S"s - surrealism, slapstick and the sophomoric. His long running newspaper comic, The Angriest Dog in the World, was one of the rare occasions when the filmmaker actually attempted regular jokes. Unlike that newsprint funny, with its so mad he's paralyzed pooch acting as the sounding board for a series of straightforward bits, Dumbland mines most of its delirium from a combination of low brow lunacy and high end artistry. 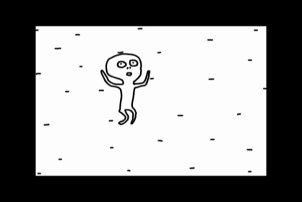 This is Lynch's first foray into animation (he wrote, drew, directed and voiced all the characters for this cartoon) and the primitive cast depictions really sell the suburban Hell set up. As our ogre-like antihero, Randy looks like a throwback retard, spewing ire-laced epithets like a sailor rejected by the local working girls while using his massive, meaty brawn in the place of thinking and common sense. He is a potent representation of pure, polluted Id, all reaction and no rationalization. He is surrounded by an equally fetid collection of crazed family members. Wife never says an audible word. She just mumbles and shrieks in a constant state of quivering fear. Sparky is a stunted, junk food fed bratling who has no real discernable human shape. He's an emaciated doughboy with extraterrestrial eyes. Lynch concocts the most horrid voices for all these individuals, combinations of human and inhuman horrors resembling the aural equivalent of sucking on stickpins. Indeed, almost every person here is an irritant, a symbol of the horribly harried society Lynch is obviously laughing at. 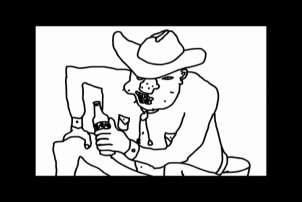 Many of Dumbland's gags develop directly from the gross-out side of silliness. Randy is a notorious farter, letting rip with riotous russet gussets that would kill a small cat. He's also a bombastic belcher and an expert in the use of blue language. This is not your standard G or PG cartoon fare. This is R to X rated ridiculousness. Also, Lynch is not concerned with the true basics of animation. He doesn't render his action realistically, and his drawing style is incredibly amateurish. But this is also part of Dumbland's charm. It allows us a little window into David Lynch's world - how he sees children, boorish bullies, redneck reprobate and domineering in-laws. His scripts are simplistic, with conversations consisting of repeated phrases, four to twelve letter words, and half-heard ideas. Many outside the director's fan base will probably find Dumbland grating, gratuitous and just plain goofy. It doesn't strive for a single familiar element (even Randy's frequent flatulence disappears by the middle of the series) or rely on recognizable formula to fashion its funny business. Dumbland is a lot like Lynch's evocative cinema. It says something serious inside a mysterious, morose methodology. 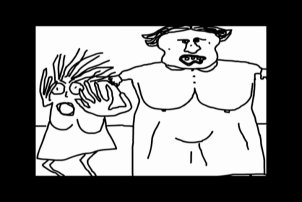 The best episodes here don't try to do too much. "Get the Stick" and "My Teeth Are Bleeding" may be exercises in tantrum tolerance (they are a cacophonous, chaotic pair) but they also represent Dumbland at its most focused. "Stick" is just sickening gallows humor, nothing more or less, while "Teeth" is a weird comment on life in stifling suburbia. Lynch loves to mock the mundane, and seeing Randy surrounded by the pandemonium of everyday life, only to comment on the least of his aggravations, is basically brilliant. Other times, Dumbland can fall a little flat. We anticipate where the 'I like to kill' conversation will go in "A Friend Visits" while "The Doctor" is all set up with only a partial payoff. The absolute best installments here deal directly with pure visual oddity. The ant song and dance that Randy hallucinates is classic (with another certified loony Lynch song lyric that will have you instantly singing along) and Uncle Bob's choreographed coughing jag is another masterpiece of misguided merriment. Indeed, all of Dumbland is pointless puerile fun. It's a filmmaker letting his stern, eccentric hair down and experimenting with a new form of medium manipulation. While it may not be on par with his sensational cinematic efforts, Dumbland is pure David Lynch. That sentence alone should sell you on the series.

The Video:
Dumbland is presented in a full frame 1.33:1 aspect ratio that recreates the series online origins perfectly. The monochrome is sharp and clean and there are no digital defects - pixelization, compression - to speak of. The visuals are vibrant and flawless. Though its nothing more than black line drawings on a stark white backdrop, the image here is really first class.

The Audio:
Lynch is meticulous about the sonic aspects of his releases - to him, the auditory is as important as the visual - and he takes great pains to deliver a professional aural package for Dumbland. The two channel PCM stereo is wonderfully modulated, with sound effects shrieking across the speakers as the dialogue remains distinct and decipherable. There is some manner of nu-metal industrial blitz going on as part of the scoring, but it never overwhelms the other aspects of the presentation. As with most of his product, Lynch delivers a solid technical treat.

The Extras:
Sadly, the sole bonus for this DVD is an eight page booklet with a list of episodes, a collection of cast drawings, and a few interesting photos (one show's Lynch sitting at his PC, working on the show). With only 35 minutes of total content in the series, one would hope for something more than a mere pamphlet. Yet that is all that is offered. The DVD presentation itself will be recognizable by anyone who bought Lynch's Short Films or Eraserhead discs from his website. The large square box houses the DVD in a cardboard slipcase and the booklet sits inside. Everything folds inward and an outer slipcover (with a huge picture of Randy adoring the front) keeps it all closed. It's very nice, but will make storage a struggle. It is not a standard size by any far stretch of the imagination. 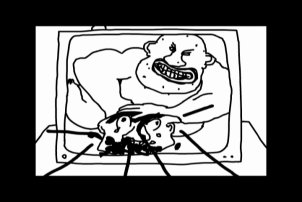 Those of us who joined David Lynch.com the minute it went live were a little miffed at the level of content the director initially provided. Some of the stuff on his site was wonderfully perverse (an animated meat monster was one memorable bit) while the rest was just a server storehouse for future material. Along with Rabbits, Dumbland was a tad disappointing on a first go round. After downloading and waiting for Quicktime to click in, you couldn't legally save or sample the series a second time without returning to the 'Net and hoping that your membership was paid. Having it now on DVD is wonderful, as it gives everyone, even those without a Lynch link, a chance to see some of the auteur's animated anarchy. Here, devoid of its PC setting, Dumbland becomes a Highly Recommended spectacle. It may not always be hilarious, but in the world of David Lynch, the line between humor and horror is very thin indeed. Dumbland closes the gap even further. This is frightening, funny stuff.