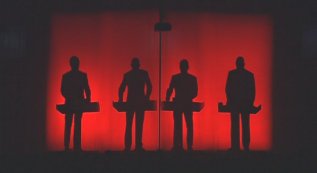 They are one of the truly original acts in all of rock and roll. Their music is more important to the modern sound of current pop culture than all the punk bands and rappers combined. They rebelled against the standard guitar/bass formula for founding a group, and instead, relied on electronics and synthesizers to satisfy their muse. The result is some of the most important, innovative noise in the entire lexicon of resonance. Still, they are seen as sort of an enigma, a hermetically sealed entity functioning within their own little Teutonic world. To this day, Germany's Kraftwerk remains one of the seminal acts of the rock era, and their lack of public presence has only made them more mysterious. So imagine the surprise of fans worldwide when the group decided to play live again. The Minimum Maximum tour was a rousing success, and now Kling Klang Musik Films (the band's brand) in conjunction with Astralwerks has release a DVD of this amazing show. It proves that, in the realm of motherboard-made music, no one tops this legendary act.

The Plot:
At nearly two hours and covering 19 songs, Minimum Maximum is not only one of the best concert DVDs ever released - it is also one of the greatest Kraftwerk performances ever. While fans await the promised CD remastering of their classic catalog, the incredible versions of their songs here will have to do - and they have never EVER sounded better. Indeed, the most amazing part of Minimum Maximum is how well Kraftwerk's music translates into the live setting. Tones that were thin and reedy become full bodied and fierce, while the ever-present mechanical bass becomes a true bombastic bump and grind. There are a few gaps in the chronology (nothing off their first two self-titled albums or Ralf and Florian) and a missing hit or two (no "The Voice of Energy", "Showroom Dummies" or "Computer Love" to be found) yet this is still a fantastic concert DVD. The actual tracks played are as follows: 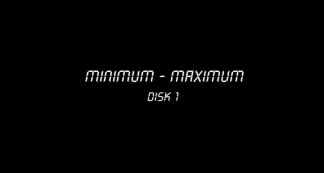 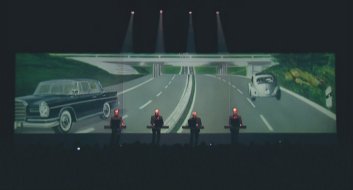 Though some may argue that this is just a studio band meticulously recreating their sound for a decidedly addicted and fervent fanbase, Kraftwerk's stellar Minimum Maximum concert is unquestionably a spectacular experience in sonic bliss. On record (or CD), Kraftwerk's music tends to be dense and dour or light and breezy. Rarely does it meld the two to argue for the synth's secure place in the pantheon of potent rock and roll. Indeed, one of the things the band strived to overcome in the earliest part of their career is the poncey prog label that affixed itself to so many electronics-utilizing musicians. They didn't want their sound to remind people of King Crimson, Keith Emerson, or fellow Germans Tangerine Dream. Indeed, for Kraftwerk, keyboard-based sound was as much about the technology as it was the tune. Often accused of being cold, sterile and emotionless, a typical album might consist of nothing more than a couple of tracks, endless improvisations of a single song strung out via variations in the frequency and modulation of the music. The result is mesmerizing, but some find it monotonous. And since vocals are not the band's strong suit, there are very few sing-alongs in the Kraftwerk canon. 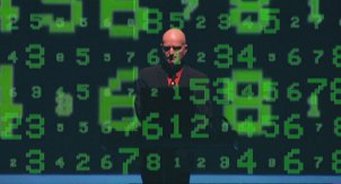 What's important about the group then, and what makes Minimum Maximum so remarkable, is that the sounds that they make tend to envelope and replace the actual atmosphere of the space they are playing in. As a result, we get the impression of resting beside the Continental countryside as the "Trans-Europe Express" rolls by, or lost in the loveliness of a well-lit strassa suggested by the seminal, sanguine "Neon Lights". Part of the power in these songs comes from the visual presentation of the music. Since Kraftwerk aren't really "playing" on stage - they do twist dials, essay the occasional melody line on keyboard and modulate the balance between tracks - they need some manner of optical wonder to wow the crowd. Combining digital imagery with archival footage, the film presentation that acts as a backdrop for the band is breathtaking. "Numbers" looks like a scene from The Matrix gone manic, while "The Model" is a reminder of the early days in fashion, before every glamour gal had to be "super" sized. Many of the movies are simple - "Vitamin" is an explosion of pills, while "Pocket Calculator" is exactly that - yet the effect is overwhelming and enigmatic. At first, it's the sound that captures our imagination. Then the films come along and paint in all the details. 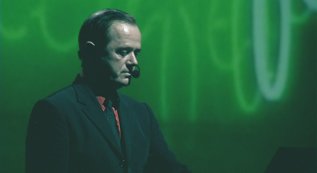 From a pure performance standpoint, it is very entertaining to watch a pair of men in their late 50s (co-founder Ralf Hütter will be 60 soon) give the wimpy whippersnappers of modern music a run for their money. Ralf, along with bandmates Florian Schneider (the other original member) Fritz Hilpert and Henning Schmitz are like secret agents as session men, dressed impeccably and near immobile behind their laptop set ups. On occasion, the camera comes in close to see the guys working an oscillator or sharpening a pitch. As the group's lead singer, Ralf carries most of the spotlight, and it's a hoot to watch him warble away in that skeletal, yet charming voice of his. There is very little crowd participation - they do sing along with "Dentaku" and express untold amounts of joy when the musicians make their way through the older material. The loudest ovation comes from the oddest element, actually. For a long time, it was rumored that Kraftwerk wanted to substitute preprogrammed robots for their actual human selves during shows. They could then play several cities at once while resting in comfort at home. Well, nothing ever came of this idea except a collection of creepy, half-metal mannequins. When these props arrive onstage (during "Robots", of course) the crowd goes wild. Even when all these automatons do is move in a synchronized herky jerky fashion, the level of love is palpable. These people not only adore Kraftwerk's music - they worship what it represents. 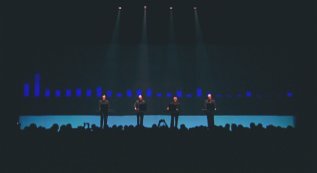 Indeed, the entire story of Kraftwerk's career can be divvied up into the sound and the significance. Without the band's music, we would not have the electro-pop craze of the late 70s/early 80s. Artists like Gary Numan, Depeche Mode and Human League would have no formal foundation for their bleep and squeak hit songs. But beyond that, Kraftwerk came along at a time when science was promising a fantasy future of unlimited possibilities. Ralf and Florian fought such rose-colored notions, placing the preoccupation right where it belonged. In essence, their music questioned how man would react with and as part of the growing technological tidal wave. Their sonic response wasn't just pretty, it was prescient. It spoke of subjects - computers, robots, space - long before they were part of the normal lexicon. Seeing them preach their caustic cautionary tales live after years of being a CD only symbol is a real revelation. Without a doubt, Minimum Maximum is one of the best live performance based DVDs ever to hit the market - and here's hoping that this band finds their place in the Rock and Roll Hall of Fame very soon. They are that important and necessary to the manners of all modern music.

The Video:
Visually, this digital presentation is dazzling. The colors are sharp, the interplay between film and band is out of this world and the attention to composition and artistry is top notch. The 1.85:1 anamorphic widescreen image is vibrant, luminescent and near flawless. Aside from some minor pixelation in the initial blacks, Minimum Maximum is a true reference quality release.

The Audio:
Speaking of home theater perfection - the DTS 5.1 Surround Sound mix is just incredible. Completely immersive, filled with surreal spatial dynamics and pristinely recreating the musical experience of the concert, this is hands down one of the best aural experiences this critic has ever had the luxury of reviewing. It puts all other music DVDs to shame, and sets a standard that very few bands will be able to meet in the future. There is a PCM Stereo mix that's equally good, but if you've been looking for that digital package that will really test your subwoofer set-up, Minimum Maximum is it.

Extras
Because of the incredibly technical clarity of the disc's audio and video elements, there is no room left for bonus material - not that Kraftwerk would be one to load a DVD with personal perspective. A recent interview in Mojo Music Magazine was their first - and supposedly, only - sit-down in celebration of the live album/DVD release. They are notoriously shy, and aside from proclaiming a real love of cycling, not much is known about the band. While a context-laden presentation would have been nice, just having the concert in a single stellar setting (though spread out over two discs) is reward enough. 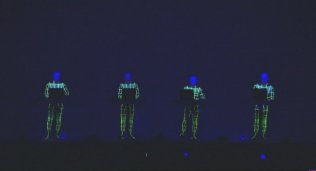 It's interesting to note that, last year, another seminal 70s act - that pesky power trio Rush - delivered one of the most masterful live DVDs ever: the resplendent and radiant Rush in Rio. Now, another group who made their most successful noise in the heart of the Me Decade has delivered an equally striking celebration of their craft. As musicians, Ralf Hütter and Florian Schneider may seem like nothing more than glorified keyboard jockeys, but that would be dismissing their obvious skill and sonic sentience. Minimum Maximum is a brilliant primer for anyone unfamiliar with the band. For those in tune with Kraftwerk's ways, there is no other grade one can give this disc aside from DVD Talk Collector's Edition. From its flawless technical attributes to its gorgeous combination of sound and vision, this is an actual in-concert masterpiece.