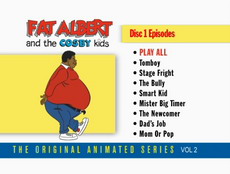 It's Bill Cosby, coming at you with music and fun. If you're not careful, you may learn something before it's done. - Bill Cosby (obviously)

It's weird the things that stay with you. Sure, you might find yourself humming the latest Ashlee Simpson song as your local Clear Channel radio station plays it for the 3,423 time, but back in the 70's, things were a LOT different. Now, I don't wanna get all "Why, when we were younger we used to walk 564,593 miles to school in a snow storm with no shoes" on you, but the television medium was very different back then. There weren't 2,594 channels to choose from. TiVo didn't exist. For that matter, neither did DirectTV, fiber optics or any of the modern-day conveniences we have today. So, for something to make a life-altering/enhancing impression, it had to be pretty unique. There are some who might not think Fat Albert falls into that category, but they'd be wrong.

See, back when I was embarking on my scholastic journey, some "experts" decided that I was too advanced for Kindergarten and needed to be bumped up to the First Grade ASAP. There I was, leaving all my friends behind and having vowels forced on me. Not to mention that I was short. Much shorter than all the first graders. Heck, I was shorter than the kindergarteners too. And this fact, coupled with the whole "stranger in a strange land" experience, gave me a terrible complex. One day after school, I remember tuning in to Fat Albert and saw an episode that would change my life. It was called "the Runt" and in it, the gang met Pee Wee, a guy who didn't let his small stature get in his way. Watching this episode, I realized that being short wasn't such a bad thing and it wasn't height that mattered. This stuck with me my whole life. Out of all the cartoons i've watched in time, this was the one cartoon made a profound impact and helped me deal with a difficult time in my life. That was one of Bill Cosby's plans. 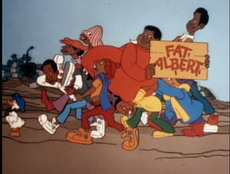 Besides entertaining, Cosby wanted kids to come away with a better understanding of life without being preachy. During this second collection of cartoons, kids will see Fat Albert and his friends confront a variety of issues ranging from stereotypes ("How the West Was Lost") to bullies ("the Bully"). They also touch on issues such as divorce ("Mom Or Pop") and alcoholism [!] ("Ounce Of Prevention") that, besides being presented in a way that was never pandered to the audience, were both groundbreaking and controversial for Saturday morning TV back in the day.

This second volume features the next twelve episodes of Fat Albert in addition to another bonus CD of music from the series. The episodes are: 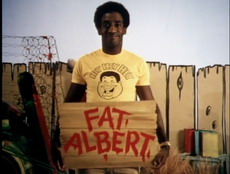 Video: The picture quality for this collection is adequate and, though the colors aren't as vibrant as i'd like, i'm sure that has more to do with the original source material. There's some slight dirt and grain, but it's nothing terribly distracting.

Audio: The stereo soundtrack is decent. With the exception of Mushmouth, the dialogue is intelligible (okay, so maybe i'm the only one that has a problem understanding him). Unfortunately, the canned laugh track is still present too (exactly why is there a laugh track on a cartoon?).

Supplements: There are none whatsoever. However, as with the first collection, UrbanWorks has included another CD containing twelve more songs from the episodes in this set. There's also a full-color, eight page booklet with an episode guide, a great essay and lyrics to all the songs.

Conclusion: Doing a review that strikes a nostalgic cord with oneself is harder than you might think. Despite the flood of great memories watching this collection brought back, i'm forced to wonder if this show was produced today, would it matter? The cynic in me shouts "Heck No!". Thankfully, we won't be listening to him today. It's true that kids are more mature than we were back in the day, but I think this Recommended Fat Albert collection should find a place in any youngster's DVD collection. And let's hope they're not careful.