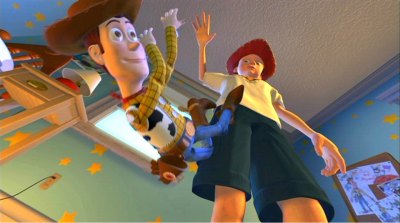 Believe it or not, it's been ten years since Pixar Studios turned the animation world on its ear with Toy Story (1995), planet Earth's first full-length computer animated film. Not surprisingly, it still stands tall as one of the best---though its toughest competitors have been the company's follow-up efforts, including The Incredibles, Finding Nemo and even Toy Story's 1999 sequel. Pixar's commitment to making films by animation lovers for animation lovers has earned them a near-invincible status: they've produced a string of CGI features that have succeeded on critical and commercial fronts, a rare feat for films of any genre.

The sequel in question is Toy Story 2 (1999), a film whose tight story and amazing execution defy its bland name…not to mention the theory that sequels often don't live up to the originals. Though director John Lasseter was very reluctant to revisit an existing cast of characters, the creative team had enough ideas left over from the first film to get the ball rolling quickly. Overall, the finished product was bigger, bolder, brighter and better in just about every conceivable way---in fact, the only thing that kept it from being even better was the fact that Pixar had already set the bar so high. Even so, audiences and critics alike recognized Toy Story 2 as the modern classic it immediately became, easily putting it in the same league as Pixar's best work (and with their nigh-invincible back catalogue of animation, that's certainly saying something). 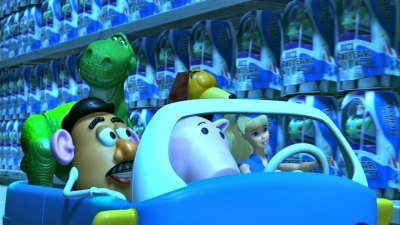 While the first outing is more of a buddy comedy, Toy Story 2 is more of a straightforward adventure---and yet it's not straightforward at all. When Woody, our hero, gets nabbed by toy collector Al (voiced by Wayne Knight), Buzz and company set out to get their friend back. Unfortunately, Woody's beginning to like his new life; after all, his massive ego is a perfect match for the attention that his new "Collector's Item" status brings. Along for the rescue mission are familiar friends like Slinky, Mr. Potato Head, Hamm, Rex and more---but there are also a few new faces on board, including Jessie (voiced by Joan Cusack) and Stinky Pete the Prospector (Kelsey Grammer). Overall, the mix of old and new---not just the characters, but the atmosphere as well---keeps things familiar enough to be comfortable with, but new enough to feel fresh. Plus, it's about as entertaining as animation gets.

This newly-released 2-disc Special Edition of Toy Story 2---hot on the heels of August's landmark 10th Anniversary Edition of the original film---is a worthy treatment in its own right. It's been assembled from bits and pieces of The Ultimate Toy Box---the infamous 3-disc set containing both films and a slew of extras---and topped off with a handful of new retrospective featurettes and interviews. If that weren't enough, the film has been given a technical upgrade similar to Sony's "Superbit" line of DVDs, as Toy Story 2 boasts an improved transfer (yes, improved) and a pair of newly-created Dolby Digital 5.1 EX and DTS-ES mixes. Overall, it's a well rounded release that captures Pixar's history and spirit perfectly. Though no screen comparisons or ratings are given to contrast earlier releases with this one, this review has been written with those viewers in mind.

First things first: owners of any Pixar DVD know how amazing the image quality can be. Toy Story 2's 1.77:1 anamorphic widescreen transfer absolutely sparkles with clarity...hardly surprising, since it was taken directly from the digital source. As it stands, the main difference is an increased bitrate (averaging right around 7 Mbps), though this improvement won't be easily noticed by those without fancy setups or progressive scan capability…hence the lack of screen comparisons. Rest assured though, this is a superior transfer: the image is more detailed overall, making this new version of Toy Story 2 a true reference-quality disc (again). Like the first film's 10th Anniversary Edition, this is as good as transfers get on DVD. It's no surprise that this one earns a perfect rating.

Equally perfect is a pair of brand new reference-quality sound mixes, including Dolby Digital 5.1 EX and a brand new DTS-ES mix (both remixed by sound designer Gary Rydstrom). Each mix exhibits an impressive atmosphere, highlighted by crystal-clear dialogue, punchy sound effects and an incredible dynamic range. The DTS offers a slightly smoother audio experience, easily helping this disc rank among the best sounding in any genre. Either way, you'll certainly be impressed. English, Spanish and French subtitles (as well as Closed Captioning) are included for the deaf and hearing impaired. English, Spanish and French 2.0 Surround mixes are also included for the 5.1 impaired. 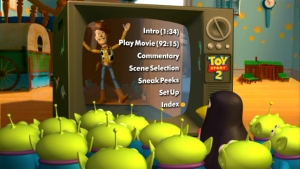 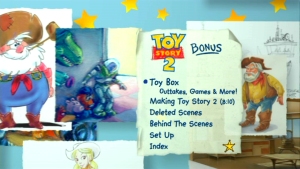 Perfectly suited for this release's retrospective theme, the animated menus for Toy Story 2 (seen above) feature lots of colorful scenes and conceptual artwork. Navigation is smooth and simple, highlighted by clever menu transitions and a lively atmosphere. This 92-minute film has been divided into 35 chapters, while no obvious layer change was detected during playback. The packaging is standard Disney fare, as this 2-disc set is housed in a slim double keepcase with a matching slipcover and DVD Guide. It's not as cool as The Ultimate Toy Box…but then again, what is?

Bonus Features:
Similar to the 10th Anniversary Edition, this re-release of Toy Story 2 combines extras new and old---but for those keeping score at home, a comprehensive list of goodies from the previous Toy Box can be found in either of these reviews. To make a long story short, owners of the original 3-disc behemoth may want to hang onto their prized possessions---but in more ways than one, this new 2-Disc Special Edition makes a terrific companion piece. With that said, let's see what's on board:

First up on Disc One, there's a new Introduction by John Lasseter (1:34) where he hypes the new technical presentation and Wheezy the penguin. The film is also paired with the original release's Audio Commentary featuring director Lasseter, co-directors Lee Unkrich & Ash Brannon and co-writer Andrew Stanton. This enjoyable discussion is full of interesting stories and other anecdotes, though it's a shame we couldn't get a true retrospective. Closing out the disc are Sneak Peeks of upcoming Disney/Pixar films and DVDs, including Cars, Toy Story, The Little Mermaid: Platinum Edition and more (10:26 total). Don't worry, though---there's much more included here. 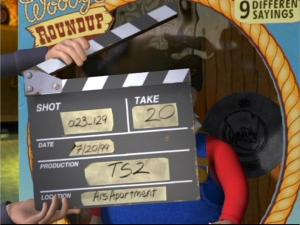 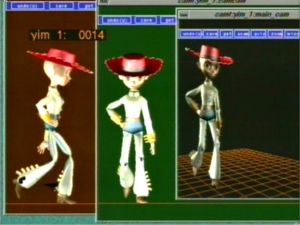 The party continues on Disc Two with a catch-all section titled "The Toy Box" (which is a bit confusing, since some of it's all-new). First up in this section are a series of Outtakes (5:27), or "animated bloopers", which Pixar is now somewhat famous for. There's also Who's The Coolest Toy? (3:19), a vintage collection of interviews (including Tim Allen and Tom Hanks), as well as a brand-new game called "Which Toy Are You?" (basically, it's a personality quiz). Also here is the amusing Ponkickies (an excerpt from a Japanese TV show of the same name) which features a rock-paper-scissors game with Woody. Next up is a "Riders in the Sky" Music Medley (3:11)---a combination of live action and film footage---while the section closes out with Autographed Pictures (0:45), a self-explanatory photo montage. It's a fun mix of stuff, but could've been a little beefier.

Next up is the same Making of Documentary (8:10) as seen on the first release. It's a short trip back with some the cast and crew (sporting larger glasses and more hair), so those who've never seen it before are in for a treat. Also here are a pair of Deleted Scenes (4:11 total, with optional introduction) in various stages of "completion". It's hard to believe there weren't more, though.

Like the 10th Anniversary Edition of Toy Story, the real meat is found in the "Behind the Scenes" section (the bulk of which appears to be ported over from the Toy Box). It's fronted by a promotional featurette titled John Lasseter Profile (3:02), an overview of the director's role in the film; followed by Cast of Characters (3:30), a look at the voice acting talent. Next up are a series of Design Galleries (roughly 33:00 total), including looks at character models, 3-D turnarounds, sets, color design and much more. There's also a brief Story section (7:08) which includes a pair of story pitches by the writing team (including the late Joe Ranft). Next up is the Production section (17:19) which includes a production tour, progression montages, animation tests, a brief "Special Effects" featurette and more. Music and Sound is up next (approximately 14:00 total), including a pair of music videos for "Woody's Roundup" and "Jessie's Song", a featurette about the film's sound design and a neat mixing demo. Last but not least is the Publicity Archive (8:32) which includes the film's trailer, TV spots and a poster gallery. A few easily-found Easter Eggs are also on board.

As a sidenote, all of the bonus features have been anamorphically enhanced---yes, even the fullscreen ones, though the film footage is boxed in on all four sides---and they even include optional English, Spanish or French subtitles. This is a major plus for the overall presentation, so here's hoping that more studios follow suit in the future. All things considered, it's a nice assortment of goodies: those who already own the Toy Box should hang on to both for the complete experience, while those unfamiliar with the vintage extras should be satisfied. This 2-disc Special Edition isn't quite as packed as the 10th Anniversary Edition of Toy Story, but there's still enough new content to make it worth revisiting.

Is this a fine release? You bet. Was it absolutely necessary? Well, maybe not…but that shouldn't stop fans of Toy Story 2 from picking up this excellent 2-disc set. There's a handful of new goodies here, combined with a slightly improved transfer and a fantastic DTS track---and let's face it, only the most ardent fans were able to snag The Ultimate Toy Box. While there's still some content that sadly didn't make the cut (including a handful of Pixar's early shorts, though maybe they'll get their own release someday), most of the film-related goodies are all present and accounted for. If you've only got the one-disc release, there's absolutely no reason why you shouldn't make the upgrade. This landmark film isn't quite a landmark double dip, but it's still a well-rounded release that just oozes fun and creativity…just like the studio that created it. Highly Recommended.