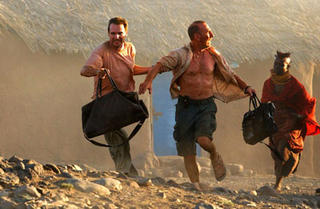 Straightforward, conventional, obviously a bureaucrat who knows how to follow procedure Justin (Ralph Fiennes) is impressed by a beautiful woman (Rachel Weisz) who asks uncomfortable questions. He offers her a drink, she accepts, they both end up at her place. At the beginning sex is all that connects the two but as the relationship progresses Justin and Tessa find themselves madly in love. Life seems good…until one day Justin receives a note that Tessa has been brutally murdered on a desolate country road in Kenya.

But why, who in the world would want Tessa dead? Why would she be murdered in Kenya? What did Justin miss in a relationship where Tessa would often seem rather edgy in her comments but nonetheless normal? Slowly reconstructing a mosaic of duplicated emails, letters, and sporadic bits of information leading back to Tessa's past Justin will reach to the bottom of a secret many are unwilling to talk about. Those that do…would often end up in plastic bags.

Based on the novel by John Le Caree and complimented by an exceptionally well-done screenplay by Jeffrey Caine (GoldenEye) The Constant Gardener is a film where everything we look for in cinema- intelligently assembled plot, beautiful cinematography, superb acting, and impressive soundtrack- is accomplished flawlessly. Under the supervision of a director who seems to be at ease with his camera the visual composition of this recent British production is indeed astonishing. Juggling with exotic locations such as Kenya and Sudan and counterbalancing with the more conventional charm of London The Constant Gardener is a film of uncharacteristic beauty.

Beneath the elusive charm of director Fernando Meirelles' (City of God) film however there is anger, pain, and enough that would make powerful businesses uncomfortable. In fact, it is hard not to comment on this film without showing a bit of bias. Whether you agree or disagree with the social overtones of The Constant Gardener you will most certainly walk out of the movie theater with an opinion as Fernando Meirelles has managed to recreate a world which not many films that I know of dare investigate.

With a cast that obviously spent a good chunk of time researching their roles what The Constant Gardener achieves is an exemplary degree of detail. Take for example the scene where Ralph Fiennes and Rachel Weisz first meet. During the press-conference where Ralph Fiennes' character shows much confidence and tolerance towards the provocative questions of Tessa we see a man convinced in his mission. Now fast forward towards the middle of the film and concentrate on Ralph Fiennes' performance after he has found out that Tessa has been discovered dead in Kenya. For the following twenty minutes or so the transformation which we witness in Justin is stunning-the once cocky, naïve, and lovable man has emerged into a person with a mission in life.

They say that passionate love can be matched only by passionate hate…and Rachel Weisz's performance as Tessa certainly proves the old maxima. The intermittent flashbacks from Tessa's life which The Constant Gardener uses to build its story are indeed exceptionally well shot. It is as if we are witnessing a different person playing the same role, the gentle and passionate Tessa is often replaced by an angry and dedicated political activist with a serious agenda. The result is a film of great contrasts which plays with your senses both visually and mentally.

Fiennes and Weisz are assisted by a number of British actors equally impressive in their roles. Old chap Pete Postlethwaite (In the Name of the Father), Danny Huston (21 Grams), Bill Nighy (The Indian Summer), and Donald Sumpter among others bring a degree of authenticity to this story which is indeed impressive. What truly made me see this film twice in a row however was the exceptional energy which Fernando Meirelles has managed to extract from this talented cast- part love story, part thriller, part social drama, The Constant Gardener is without a doubt one of the few intelligently-directed films I saw in 2005.

The Constant Gardener is the winner of the Best Actor (Rachel Weisz) and Best Actor (Ralph Fiennes) Awards at the British Independent Film Awards(2005), and was nominated for Golden Lion (Fernando Meirelles) at the Venice International Film Festival (2005).

Presented in its original aspect ratio of 1.85:1 and enhanced for widescreen TV's Focus Features/Universal's presentation of The Constant Gardener is very impressive. With rich colors, excellent degree of contrast, hardly a sign of any print damage, and a lack of distracting edge-enhancement this DVD is of exceptionally high quality. I viewed the film at my local theater and seeing the excellent transfer Focus Features have provided puts me at ease in recommending this disc…I can hardly think of anything that could have been done any better. Perhaps the only aspect of the video presentation I would have revisited is the slight softness of the image in a few selected scenes where the camera zooms over the sun-lit landscape of Kenya. Aside from that I am perfectly satisfied with the way the film has been transferred to DVD.

Presented with its original English language track and a great 5.1 mix and French dub which in my opinion is uncalled for the sound quality is indeed exceptionally high. Crisp and clear sound accompanied by the delicate ambience of the surround speakers transforms The Constant Gardener into a remarkable cinematic experience. With a soundtrack graced by the rich folklore tunes of Kenya I was quite concerned that Focus Features might opt for a less elaborate mix but what I heard makes me very, very pleased with the final result. With optional English (HOH), French, and Spanish subtitles.

Deleted Scenes- a total of four deleted scenes that are quite lengthy indeed. Now having seen all four of them I believe that there was a reason why they were cut from the final film version. They do appear to bring some clarity to one of the characters but overall I find each and every one of the scenes to be just a "supplemental material".

Extended Scene- Haruma: Play in Kibera (an extended cut of a small play which we see during the course of the film. Much more elaborate and quite amusing this little gem is actually well-worth a look).

Embracing Africa: Filming in Kenya- Following the filming crew in Kenya and all of the troubles the British team had to endure this is quite a fascinating look at a country with an unfortunate present. The degree of poverty which you will witness is stunning.

John Le Caree: From Page to the Screen- An interesting and very revealing conversation with John Le Care in which he follows the story behind The Constant Gardener and how the script was put together.

An exceptional film which goes deep into the rabbit hole of the billion-dollar industry involving pharmaceutical "research" The Constant Gardener should and must force you to reconsider what the term civilized entails. This is intelligent cinema at its best!! DVDTALK Collector Series!